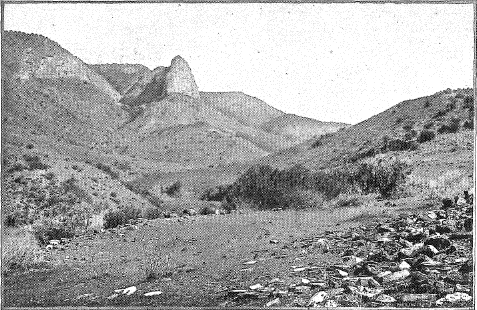 Archived photo of the area where SCP-992 was recovered.

SCP-992 is within a humanoid containment chamber, located in Site-77's Euclid SCP wing. The chamber does not have any windows or natural lighting. Several potted plants are contained in the cell, and tended to by personnel. SCP-992 is permitted to request specific plants, as long as they are of a benign nature. Any other requests made by SCP-992 are to be denied. Animals may be exposed to SCP-992 under controlled environments, for testing purposes. Communication with SCP-992 is forbidden, and any subject who has been found to communicate with SCP-992 will receive a full anomalous evaluation. D-Class personnel are not to be used with SCP-992 testing.

SCP-992 is an elderly Australian Aboriginal male of Pitjantjatjara ethnicity, 1.2 meters tall, weighing 95 kg. SCP-992 claims to be between 57-71 years old; however, in the 65 years the subject has been contained, it has not appeared to age. SCP-992 will attempt conversation with individuals who visit its containment chamber. These conversations typically consist of the subject describing its unsubstantiated prophetic abilities, and engaging the visitor in esoteric philosophical debates.

When left alone, SCP-992 attempts to converse with various forms of flora and/or fauna, and will occasionally claim to receive prophetic visions while conversing with them. These conversations will usually take place over the course of several hours, with SCP-992 holding a one-sided conversation with the organism it is conversing with. If SCP-992 is asked about the topic its conversations, it will frequently allude to vague natural events which have not occured; it also maintains claims to have predicted various, widely-publicized natural disasters. However, these are unsubstantiated.

When SCP-992 is able to observe any weather pattern, the perception of humans viewing SCP-992 will be changed. These humans will observe unusual and nonsensical weather and meteorological activities. This effect will persist for 10-30 minutes after the affected persons have ceased viewing SCP-992. While affected, subjects will be unable to refer to themselves or others by name.

Observations of subject affected by SCP-992
We were just sitting on the bed of the ute1, shootin' the breeze. It wasn't anything pressing or nothin', it's just that driving gets boring after awhile. Then I see this blackfella walking up the road. He doesn't have any shoes or anything on, and his feet looked all ruined. I was about to ask him if he was all right when the drop hit me. Now mind you, this the middle of the outback, and there weren't no clouds or nothin'.

So, we turn back to lookit the Abo, and he's pointin' up. Stared at him for a sec, then I look where he's pointin'. There's this white… black cloud. Hard to explain… hard to picture… but try to imagine the cloud took the shadow it was castin' on the ground, and wrapped it around itself like a blanket. Looked like it was keeping the life inside warm. About then's when the second drop hit, and the burning started.

These looked like raindrops, 'cept they were rusty. Like someone was driving an old beat-up ute trundlin' on top of the wrapped cloud. They looked hot, and when they hit it burned — not like a sudden heat burn, more of an old burn, the kind you get after walking through the desert for a lifetime. It's deep in the skin. Never really goes away… sometimes you'll ferget, think it left. As ya think about it, starts with an itch. Gets real bad. When you scratch it, the sun and time and oldness all comes crawling out.

We skedaddled pretty quick, didn't wanna stick around after all that. I don't know if he caused it, or if he was warning us, but he knew. You could see it in his wrinkles, and the calloused patches of skin… he knew exactly what was going on.

SCP-992 was found in a small village near the Alice Springs area in central Australia, after reports of a SCP-992's effect reached agents posted in the area. Investigation of the village these reports originated from showed SCP-992 had taken up a position as the village's leader, claiming to have godlike influence over the villagers' lives and the world around them. After demonstrating its abilities to the agents, SCP-992 was contained. Amnestics were distributed to witnesses, and a cover story portraying SCP-992 as a fraud was disseminated.

Incident Report #992-C 01/17/1949: Level 1 personnel observed SCP-992's conversation with a eucalyptus tree. When asked about the conversation, subject answered "She (the eucalyptus) was very depressed, and difficult to name. I was unable to fully paint the picture."

SCP-992: We were burying them. Everyone who had died. It had been a dead year, and losing so many names had brought hope down. They had no name anymore, they were only corpses. But I could see them. The names were there, still strung to the bodies. I reached out and touched them… and then my name was there too, and I could hear them.

SCP-992: Someone there had a true name before this, but they changed it to me. I can see names now, and where the snippets of thread holding the world together come from. It all goes up.

SCP-992: Your true name is [REDACTED] Boyd.3 I do not know what your name was before, but now it has, and always was so.

SCP-992: Hold up my hands… (gestures with both hands) and let the fates pull whichever way they pleased. Whether it was up in a cloud, or here with the people, I am able to see it.

SCP-992: They go up to the south sky. I helped tie them all together.

SCP-992: Do you ever see sunlight, dancing with his brothers over a cold desert?

Dr. Boyd: Are you referring to the aurora australis?

Footnotes
1. Australian slang for pickup or utility vehicle.
2. Referring to SCP-992's anomalous properties
3. Dr. Boyd had been using a pseudonym for this interview, and it is unknown how SCP-992 obtained his name.
SCP-991 SCP-993