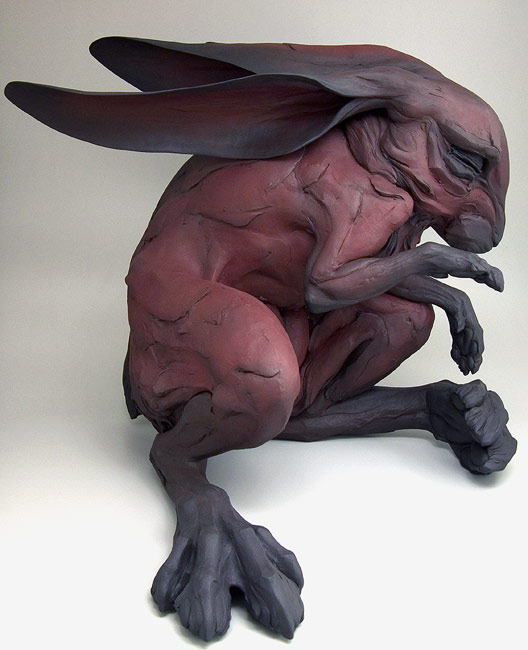 All individuals suspected of being exposed to SCP-979 must be reviewed for changes in psyche. SCP-979 itself should be contained in a wire cage (and plastic flooring) approximately five (5) metres in length, height, and width. As SCP-979 does not produce waste, there is little need for any bedding. However, SCP-979 should be given a water dispenser of 150 milliliters, refilled daily, to prevent drying out. Also, SCP-979 is allowed one (1) shelter in its cage, consisting of commercial plastic of any color made for medium to large members of the Leporidae family normally sold in pet shops for companionship. SCP-979 is to be monitored with a hidden camera twenty-four (24) hours a day. Should SCP-979's behavior change in any way, it is to be logged and reported to a level 3 or higher personnel.

SCP-979 is an animated stoneware figurine in the shape of a member of the family Leporidae. SCP-979 shows subtle differences from traditional members of Leporidae, including but not limited to the ability to express emotion through facial changes and posture that is congruent with typical human reactions. SCP-979 lacks proper anatomy, with its ears and back legs being too long and large, and therefore has extreme difficulty with normal movement. The behavior of SCP-979 shows some sentience, but it generally only reacts to any stimuli with fear and/or avoidance. Any other reaction must be reported to level 3 or higher personnel.

SCP-979 emits a high-frequency noise in response to any stimuli; the volume appears proportionate to SCP-979's level of distress. Extended proximity to SCP-979 causes synesthesia of all senses, typically manifesting after four (4) hours and escalating over a variable period of approximately three (3) weeks. Exposure to the noise produced by SCP-979 has been shown to increase the rate at which synesthesia develops; however, recordings have failed to replicate the effect and, as such, the noise is not believed to be the primary cause. The first sense to be affected is typically hearing, although the reason is unknown. Humans exposed to SCP-979 tend to describe a 'whispering, rustling voice' associated with the sensation of touch and will avoid any physical contact with anything as much as possible. Typically, this first effect appears approximately ten (10) minutes after exposure.

Within one (1) week, exposure to SCP-979 causes synesthesia in at least three (3) senses, although which three tends to be dependent on the specific person. A level of psychosis appears to develop at this stage, although whether or not it is from mental disturbance of the synesthesia or something else is unknown. The only recorded personnel (hereby labeled SCP-979-V1) exposed to SCP-979 described symptoms similar to high anxiety, most notably the recurring thought of an imagined entity almost touching their skin at all times, especially so during nights, in which the exposed personnel reporting a belief of the imagined entity running any number of limbs up and down their body, just above skin contact.

After the passing of approximately two (2) weeks, synesthesia caused by SCP-979 spreads to all senses, although certain senses appear to be less intrusive than others, depending on the specific patient. In SCP-979-V1, the previous recurring thought of the imagined entity became an obsession and SCP-979-V1 regularly attempted to attack the imagined entity with apparently little success. All inquiries on the appearance of the imagined entity were unsuccessful. SCP-979-V1 attempted suicide approximately ██ times during this period and developed severe insomnia. In addition, SCP-979-V1 described hallucinations of the aforementioned entity now almost licking their skin, along with other types of contact such as kissing, stroking, and [REDACTED]. At no point does SCP-979-V1 describe actually being touched.

Within three (3) weeks, the synesthesia develops fully in all the senses. SCP-979-V1 had extreme difficulty dealing with any kind of sensory information, mind regularly blocking out senses due to overload. SCP-979-V1 displayed behavior similar to SCP-979 itself and appeared to attempt interaction with hallucinations before falling into a catatonic state. Afterwards, no other progression was shown until a period of five (5) weeks, in which the subject was discovered with a large gash in his torso, organs having been pulled from the body cavity. It is unknown how such a wound came to SCP-979-V1.

SCP-979 was found in ██████, Chile. SCP-979 was featured in an exhibition by an artist under the pseudonym of The Kind Man, in the ████████ Museum. After news reports of hallucinations and an outbreak of synesthesia, SCP-979 was placed under Foundation custody.

████ : Morning already? Well, last I checked my name was ████. Don't you whitecoated bastards have a record of this shit lying around?

Doctor D████████ : The time is exactly 9:07 AM. Please explain for the recording how last night went.

Doctor D████████ : Nothing recorded last night was particularly unusual. However, your behavior-

████ : You didn't fucking see it?! It was hovering over me the whole damn time! At least [REDACTED] things just barely touching me, I could feel it! When it's not the fucking whispering, it was the colors, the damn smells! Ain't there a way you can reverse this syn-thee-sa bullshit? I've seen you psychopaths do things that make reality shit itself, for chrissakes!

Doctor D████████ : Please go into further detail of last night's events according to your perception. Note the camera only caught your erratic behavior before Agent ██████ was forced to intervene.

████ : You gotta be shitting me, with all that fucking technology you couldn't-

Doctor D████████ : Please answer the question. What did you see last night?

████ : It ain't a seeing thing, doc. It was a feeling thing. It was like, if I fucking breathed too hard I'd touch whatever the thing was, it was so damn close, just watchin me and hoverin'. Could hear it sayin' somethin', right in my ear, the bastard's fucking with me, he is! I could feel his smell, it was like… the static of the dust on a TV screen, but that little tingling is going in you, right… right here. ████ touches his sternum. And it just builds up till ya have to take a breath, and I swore on my life I almost felt the bastard's hand… tentacle.. thing! He's on me right now, can't you fucking see it?! ████ grows increasingly agitated and begins noticeably hyperventilating. Oh God man… I feel it now… Fuck! Make it stop! MAKE IT STOP!!

████ begins to slam his face into the side of the interview table, presumably in a suicide attempt. After repeated orders to stop were ignored, Agent ██████ administered a sedative and took subject back to his observation chamber.