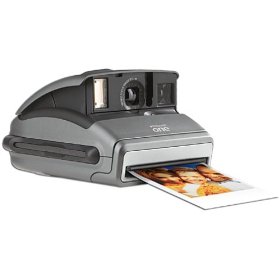 SCP-978 is to be kept in security locker H-J-12 at Site 17, and only to be removed or handled by personnel with Level-2 security clearance or higher. Testing parties may request extra film and printing paper at their leisure. SCP-978 is not to be used for blackmail, entertainment, or personal reasons.
This means you. ~ O5-██
All photographs produced by SCP-978 are to be cataloged along with full testing description. Requests to destroy photographs may be processed by Level-4 security clearance or higher personnel, at the discretion of the testing party.

SCP-978 appears to be a standard chrome-and-black Polaroid One instant camera, with no distinctive identifying marks or damage. SCP-978 operates the same as a standard camera, and shows no anomalous behavior beyond the photographs it produces. When a subject is pictured with SCP-978, the photograph that develops shows not what the subject was doing at the time of the photo, but rather what the subject wanted to be doing.

This effect appears to be, for the most part, random, sometimes showing drastic changes and deeply suppressed desires, or simple changes and alterations to the subject or their surroundings. SCP-978 appears to be capable of expressing the desires of both humans and other creatures (see testing log) and appears to convey the simplest desires the easiest. Should two subjects with contrasting desires both be photographed together, the subjects' desires appear to 'mix' (see testing log for additional information).

Subjects are allowed to request photographs of themselves. Remember, people, just because some of the photos show distasteful things doesn't mean that you're going to do them. ~ Dr. ████

Subject: Research Assistant ██████ █████
Photographed Activity: Smiling for the camera, neutral pose.
Photo Result: Subject is shown in casual clothes, as if heading out for the night. Subject admits that she wishes to go home.

Well, the first round of tests wasn't so bad. Except for those two…let's try this thing on some Class-D and other personnel, see if we can't get more unusual results. ~ Dr. █ █████

Testing 05/██/██
Testing to see effects of SCP-978 on nonhumans.

Subject: Single zebra finch, standard lab animal.
Photographed Activity: Sitting in cage, observing photographer.
Photo Result: An open cage, with the zebra finch flying off the edge of the photo, only a wing and part of the tail visible.

Subject: Kitten (stray lab animal)
Photographs Activity: Being held for the picture by Dr. █████
Photo Result: [DATA EXPUNGED] - I would NEVER do that to a kitten! -Dr. █████

Subject: Small spider
Photographed Activity: Clinging to the ceiling. Dr. █████ admits that the picture was taken as a last-minute thought when she walked past the spider on her way to SCP-978's containment locker.
Photo Result: A massive, hallways-encompassing web with a small spider in it.

Well, at least we know it works on animals. -Dr. █████