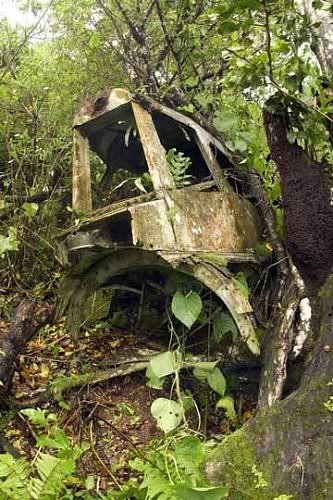 Instance of SCP-974-2 prior to destruction

One specimen of SCP-974 is kept within Zoological Reserve Site 16 in a lightly wooded containment area measuring no greater than 2500 m². An armed patrol is to be conducted at least once weekly in order to ascertain the status of any instances of SCP-974-2 and destroy any that are determined to be no longer in use.

Once every 3 months, a group of no fewer than 4 children between ages 6-12 are to be acquired per Protocol 12 and transported to the containment area. They will be housed in on-site barracks and daily encouraged to explore and play in the containment area. If SCP-974 has not targeted one of the children within 5 days, a different group of children will be introduced. This cycle is to be repeated until it is confirmed that at least 1 child has been targeted by SCP-974.

If SCP-974 attempts to leave the containment area, on-site security will herd it back using flamethrowers.

Agents are instructed to attempt to capture any instances of SCP-974 encountered in the wild, but are authorized to use lethal force to eliminate SCP-974 if capture is not feasible. This may include the total immolation of any areas inhabited by SCP-974, if warranted.

If any instances of SCP-974-A are encountered, they are to be destroyed as rapidly as possible. See Document 974-C(4b-f) for a full list of recommended weaponry and tactics.

SCP-974 is a carnivorous creature that superficially resembles a human child. It possesses greater durability, strength and stamina than a child of commensurate size and does not appear to be deterred by bullets or melee weaponry. It has been demonstrated to have an extremely adverse reaction to open flame, however.

Although SCP-974 can briefly subsist on small animals such as squirrels or birds, its primary and preferred food source is prepubescent human children. Each time it successfully consumes a human child, it enters a state of torpor and its form changes over the course of 10-12 days to replicate that of the most recently consumed child. It is capable of speaking any language the consumed child knew, although its vocabulary and speech structure is always very limited and simple.

SCP-974's preferred habitat is lightly wooded areas such as parks or undeveloped land near moderately populated human settlements. Once it has settled into a new territory, it uses local vegetation, wood and other available materials to create between 1 and 5 "nests", designated SCP-974-2. SCP-974-2 are generally simple, crudely built, one-room structures, and are usually placed in the lower limbs of a tree or on low rises of land.

Once SCP-974 has built at least one instance of SCP-974-2, it will seek to lure a group of between 2 and 5 prey subjects to SCP-974-2 by entreating them to follow it to the structure in order to play. SCP-974 will participate in simple, physical play activities such as hide-and-seek or tag with the subjects, allowing them to leave and return at a later time. This behavior pattern can last up to a week before SCP-974 invites a single prey target to play with it alone. At this point, whether the target accepts or declines the offer, SCP-974 will subdue the target and [REDACTED], leaving the clothing with only minor damage and fluid staining. SCP-974 will typically abandon SCP-974-2 after this, although it will remain in its territory until the local population of children is depleted.

SCP-974 displays a heightened "fight or flight" reaction to the presence of post-pubescent humans and will immediately attempt to flee to an instance of SCP-974-2 if it is aware that it is visible to such an individual. If retreat is not an option, SCP-974 becomes highly aggressive and will attack all known post-pubescent individuals. Due to its increased strength, SCP-974 has been known to dismember the targets of its attacks before being dissuaded through standard containment procedures.

Addendum A-3 Following an investigation by the Ethics Committee, containment protocols have been adjusted to no longer include providing live human prey for SCP-974 as of 01/01/201█. Attempts to use SCP-1680 instances as a substitute have failed following SCP-974 rejection of all instances it has been presented with. An increased stock of small animals typical for the environment will be introduced in order to provide sustenance for SCP-974.

Addendum D-1 On 08/16/201█, during the weekly sweep of Zoological Reserve Site 16, patrol teams discovered that all previously existing SCP-974-2 structures had been destroyed, apparently by brute force methods. No new structures could be located, but the teams did locate a roughly oval patch of freshly disturbed soil, measuring roughly 1.5 m x 2.2 m. Following consultation with the Site supervisors, a geological team was dispatched to use ground-penetrating radar to image the patch of soil.

The GPR revealed a humanoid figure curled into a fetal position 1.3 meters below ground level. Continual scanning over the course of 10 days revealed no changes in position and supervisory personnel decided to exhume SCP-974 in order to more closely examine it. At that stage, SCP-974 measured 2.2 m in length and weighed 37.4 kg. It did not have any visible orifices or facial features. Its skin was white and slightly tacky. Later analysis revealed the presence of several previously unknown enzymes in the mucus coating of SCP-974. No respirations were detected, although a faint and slow heartbeat was detected. After a further 4 weeks of monitoring, during which the heartbeats ceased, SCP-974 was dissected. For a complete breakdown of its anatomical structure, see Document 974-F(1a-j).

Addendum H-11 On 10/03/201█, 7 instances of SCP-974 were identified in the greater ██████, ██ area and its surrounding suburbs. 6 of the instances were killed during attempts to capture. A cover story for the resulting wildfire was disseminated by Foundation counter-intelligence, blaming the cause on a confluence of a deliberately set fire, improperly extinguished campfire, and lightning strike.

The remaining example of SCP-974 was captured and transported to Zoological Reserve Site 16, where it was installed in the containment zone of the original creature. It too was denied human prey and buried itself on 12/17/201█. The decision was made to leave the new instance of SCP-974 buried and see whether this represented a transient metamorphic stage. Constant GPR scanning revealed that SCP-974 grew in stature and size, apparently absorbing nutrients directly from the surrounding earth.

Addendum H-12/Incident 974-Phi On 01/25/201█, SCP-974 dug itself free from the earth. The new form (hereby SCP-974-A) was highly aggressive, much more so than the initial form, and immediately ran towards the nearby monitoring station, where it ripped off the steel roof and attacked the monitoring crew. It fully dismembered all 6 members of the crew within 90 seconds and [REDACTED]. Less than 12% of the crews' bodies were later recovered.

Response teams quickly mobilized and, per containment protocols, arrived within 15 minutes. SCP-974-A mimicked the form of Georgia ██████, one of the monitoring crew, and exited the monitoring station acting as if it was dazed or injured. It begged the teams for assistance, miming a serious wound, but did not appropriately respond to the response teams' password challenges. When the response teams refused to allow SCP-974-A to approach, it attacked. It demonstrated the same resistance to firearms and melee attacks as its initial form, but did not display a fear of flame and did not appear to be adversely affected by being set on fire.

SCP-974-A was killed when Guard Emilio ██████ sacrificed his arm while shoving a live hand-grenade down SCP-974-A's throat. The resulting explosion did not rupture SCP-974-A's epidermis, but did cause sufficient internal damage such that the remainder of the teams were able to subdue it within 20 minutes.

28 Commendations For Valor were awarded posthumously.

Addendum H-25 In light of Incident 974-Phi, the original containment protocols have been re-instated.