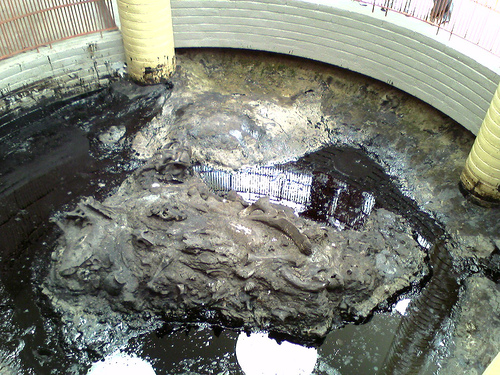 SCP-968 is kept in the center of large porcelain bowl with a steep curve. The bowl itself is made for transport, feeding, and removal of waste from SCP-968. It is lined with steel and braces designed to tip the bowl when needed. The bowl measures 7 meters across and 4 meters deep. While dormant, SCP-968 should be kept in an enclosed environment atmosphere at 3% humidity or less, between 30 and 35 degrees Celsius. To achieve a maximum state of submission, SCP-968 is to be "fed" between 50 and 80 kilograms of protein every 4 days.

Clean up of waste is achieved by tilting the bowl using the mechanical platform. SCP-968 will typically hold to one side of the bowl while waste slides down to the lowest point. A drip torch is used to ignite particulate waste and ash is removed by using blowers.

Commonly known as the "Tar Baby," SCP-968 appears as a black, adhesive high-viscosity oil. Current research explains SCP-968 as a colony of fibrous protozoa working together without any true structure, central nervous system or endocrine system, despite observations of cellular coordination.

Similar to the flexing properties of animal muscle, these fibrous protozoa are capable of pulling on one another with a combined strength. Specialized flagella along their surfaces allow for the gripping of prey and surfaces but without tendons, ligaments or skeletal material to support it, SCP-968 is incapable of any significant locomotion. The colony "hunts" by mimicking the appearance of prey or a wounded animal to lure other predators to attack it. In the presence of humans, it has "learned" that mimicking the shape of an incapacitated infant or small child is the optimal lure for human beings.

Once ensnared, prey often exacerbate the situation by struggling against SCP-968, which serves only to compound the adhesion; the effect is much like quicksand. The exhausted prey is pulled either to a "den" or underwater to be drowned. SCP-968 pulls against its prey in opposite directions on both macroscopic and microscopic levels to mechanically dismember its prey until it is torn into small enough fragments to digest on a cellular level.

Though SCP-968 has shown a heightened level of intelligence, SCP-968 appears to have a single-minded devotion to feeding and exhibits no other desires. Attempts to freeze SCP-968 for analysis have proven extremely hazardous. It conducts heat through friction and metabolism, keeping parts of itself from freezing. The frozen parts of SCP-968 provide a structure for its fibrous tendrils to act against, much like muscle on bone.

It is advised not to continue freezing attempts, as SCP-968 may "learn" to use the bone structure of its prey to escape or attack Foundation personnel.

Acquisition: SCP researchers and Task Force Epsilon-9 (aka. "Fire Eaters") were dispatched to North Central Africa after an Associated Press reporter put several seconds of film onto the Internet. In the video, an indigenous man was seen being pulled into a dark pool of water. The reporter was on location to investigate reports of locals being consumed by shadows. After considering known African folklore, it was believed that fire was the tool of choice to be used in suppression and containment.

Though well equipped and informed, Epsilon Force had great trouble containing the entity that was to be later labeled SCP-968. Before the arrival of Epsilon team, it became apparent that SCP-968 had established snares of itself across nearly two square kilometers of savanna. By attaching itself to animals and allowing its prey to flee for nearly a kilometer in every direction, SCP-968 was capable of weaving a web of fine tendrils, up trees, down holes, and across small bodies of water. While used in the future acquisition of prey, it proved to be a battlefield level ambush for Epsilon. Fire has only a minimal effect on SCP-968. While it doesn't actually destroy it, enough heat causes it to recoil and release whatever it has held fast to. Members of Epsilon-9 were at first reluctant at using their flame accelerators on team members that had been ensnared by SCP-968.