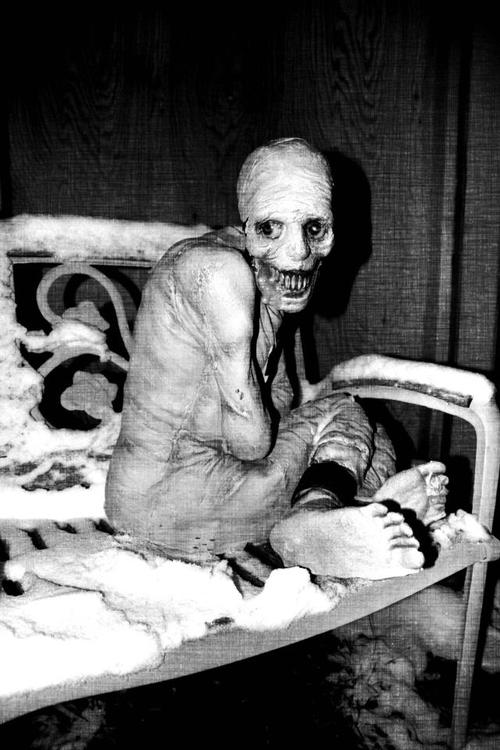 SCP-957 is to be monitored via remote video surveillance set up within the location where it currently resides. Personnel are allowed to approach and interview the entity when given clearance by four (4) Level-3 or higher employees.

One (1) D-Class subject is to inhabit the closest residence to SCP-957’s location as possible in order to minimize civilian exposure to the entity. SCP-957’s house is to be monitored for signs of SCP-957-1 exhibiting unusual behavior, namely feigning helplessness due to blindness. If this is observed, a D-Class subject is to be sent to escort SCP-957-1 back into its house.

SCP-957 is a humanoid entity currently residing within a house in ██████, Kentucky. This organism measures approximately 2m in height and 75kg in weight and appears to be devoid of internal organs, as observed via a large opening on its ventral torso. Furthermore, it does not appear to require sleep or nourishment. Interaction with personnel has shown that the entity is capable of speech and is fluent in English, but prefers to talk in a currently unknown language. It is not openly hostile towards Foundation personnel, yet often refuses to cooperate with interviews and testing. Attempts to restrain SCP-957 for these purposes have proven ineffective due to the entity’s disproportionate level of strength.

SCP-957 will always reside in a house inhabited by a single human, hereby designated SCP-957-1. When the instance of SCP-957-1 that SCP-957 is living with dies, the entity will demanifest from the location and reappear in the nearest location that fits the above mentioned requirements. Upon doing this, it will seek out the individual residing there and force the human's body through an apparent portal via its chest cavity, where the subject will remain for approximately four (4) hours before emerging. After this, SCP-957-1 will be missing its eyes as well as exhibiting drastic changes to its memory. These individuals will believe that they have been blind all of their life and possess knowledge of Braille and living without sight. Additionally, they will believe that SCP-957 is a close family member, a dear friend, or a partner in an intimate relationship that had been severely burned all over its body. As such, they show affection for the entity but refuse to touch it.

Once every month, SCP-957-1 will go into crowded areas and feign distress due to its blindness. It appears to do this in order to deceive people into helping it back to its house1. Once SCP-957-1 has successfully lured a human subject into the building, it will lock the doors, shout, walk to the dining room and sit down until SCP-957 addresses it after dealing with the human. At this point, SCP-957 will approach the human, and a black spherical barrier will surround the two subjects. This obstruction is composed of an unknown substance and is apparently impenetrable. This structure usually remains in place for approximately five (5) hours; however, it has been noted to demanifest as early as thirty (30) minutes after manifestation and as late as twenty-seven (27) hours after manifestation. The human normally appears to have undergone extreme physical alteration during this time2. In 30% of observed cases, the human is reduced to piles of organs seemingly organized by their respective biological system. SCP-957 usually then uses these remains to prepare a meal for SCP-957-1. The other 70% are taken to the fireplace of the house and burned.

Addendum-957-Gamma On 16/10/2006, SCP-957 was noted to approach a retrieved human during the normal monthly event. The opaque barrier normally surrounding the subjects manifested as usual; however, it was noted to randomly become transparent, yet still present, during this event. Personnel reported that the view from the area showed a scene with a group of entities resembling SCP-957 gathered around a conical object that was mostly obscured by the figures. However, it appeared that the captured human was within the construct and that the entities were [REDACTED], which continued for approximately five (5) hours. At this point, the human, presumably dead, was removed from the object, dismembered, and sorted into piles of organs. At this point, the barrier demanifested and SCP-957, along with the human remains, reappeared within the house.

Addendum-957-Lambda As of 13/03/2007, Foundation linguists have managed to translate enough of SCP-957's language to decipher basic sentences and phrases spoken by the entity. This information is not to be made known to SCP-957 and personnel are to continue to communicate with it solely in English.

Addendum-957-Omega On 06/06/2008, SCP-957 was noted to engage in an extended conversation in its native language with an unseen individual. The audio from this exchange was recorded by hidden audio and video recording devices within the house, translated by Foundation linguists, and transcribed below.

???: It will be a while, <friend/brother>. Your disguise is working wonderfully and your <UNKNOWN: "WOFRET"> is extremely convincing. Much better than that [REDACTED]3. And you still get to talk in our language freely, right?

SCP-957: True, true. It is just boring and tiresome down here. No wonder <UNKNOWN: "PLECEVIP"> destroyed his <UNKNOWN: "WOFRET">. These <physical/real/unclean> <forms/bodies> are so <restraining/painful>. [SCP-957 stretches.]

???: Patience, patience. We have to let them watch the few so that the <many/family/group> can work freely. We will be done with our <research/watching> soon enough, do not worry.

???: Excellent. I will speak to you at the next <UNKNOWN: "OLLIT">. Speaking of which, you should create another false scenario again.

Footnotes
1. If SCP-957-1 is unable to do this, SCP-957 will go out and retrieve a subject. However, it appears to dislike doing this.
2. e.g. additional limbs, reptilian scales, rearrangement of appendages
3. The description detailed by the unseen entity closely resembles that of SCP-████. Investigation is underway to discover the connection between these two objects, but no overt similarities have yet been found.
4. Three (3) months after this, an incident resembling the events from Addendum-957-Gamma occurred.
SCP-956 SCP-958