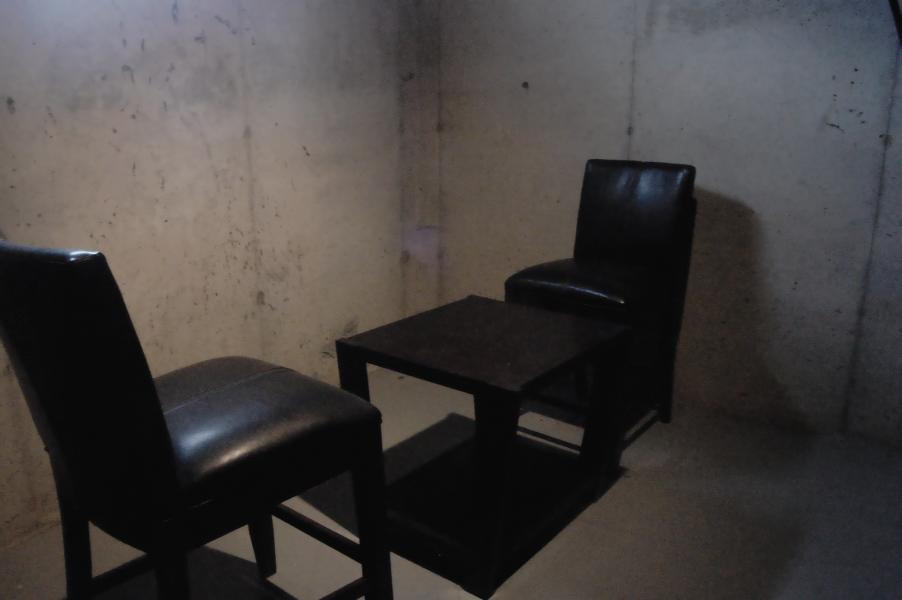 SCP-946 is to be kept in the center of a 5 m x 5 m x 5 m windowless, soundproofed containment chamber. The only light source in the room is to be a single spotlight, situated directly above SCP-946. Cameras and audio recording devices monitor SCP-946 at all times to ensure all SCP-946 activity is recorded. A minimum of one skilled debater is to remain on call at all times. Anyone who observes a debate between SCP-946-1 and SCP-946-2 where classified Foundation information is revealed for which they do not have clearance is to be administered Class A Amnestics.

SCP-946 is a wooden table with two accompanying chairs. At unpredictable intervals, ranging from 2 to 4 times per week, two men will appear (designated SCP-946-1 and SCP-946-2), taking the two seats. SCP-946-1 and SCP-946-2 will then have a civil argument or debate about a random subject. The topic of these arguments has varied from existential concepts to trivial and mundane subjects. In some circumstances, these debates have focused on a hypothetical event, and the merits of its occurrence. In these cases, the outcome of the argument manifests itself in reality. At any time during the debate, an outside observer may join the debate, with a new chair appearing at the table and the dimensions of the table altering to fit all parties. Should any of the "guests" make an ad hominem argument or make an intentionally false or misleading statement, SCP-946-1 will criticize them. If they continue, SCP-946-1 will state that they are no longer welcome in the debate, at which point their chair will disappear. Any further attempts for this subject to communicate with SCP-946-1 or -2 will be ignored.

Following Incident 946-██ (See Addendum 2), it has become clear that SCP-946-1 and SCP-946-2 appear to possess omniscience, or, at minimum, any knowledge that may be relevant to the discussion.

SCP-946-1 and SCP-946-2 appear, physically, to be normal humans. SCP-946-1 is a tall black man with short grey hair and a long beard, who is referred to as "Harmon". SCP-946-2 is a thin bald white man, who is referred to as "Garcian". When arguing, both men seem capable of creating three-dimensional images and summoning small objects as a means of simulating events or providing information.

Addendum 2 Incident Report 946-██: On 04/08/████, SCP-946-1 and SCP-946-2's discussion shifted focus unexpectedly to the subject of gravity. The debate included mention of several concepts in theoretical physics, including String Theory, [REDACTED], and [DATA EXPUNGED]. Both men seemed familiar with concepts barely understood by modern science, as well as a previously undemonstrated knowledge of several highly classified Foundation documents, most notably SCP-536's testing logs. SCP-946-1 was arguing against the existence of gravity, while SCP-946-2 considered and commented on his arguments. Roughly fourteen minutes into the discussion, on-duty researcher Dr ███████ entered SCP-946's containment chamber and joined the debate. On later questioning, Dr ███████ claimed he was simply "stopping a potential disaster". He argued that without gravity, the universe as a whole would cease to exist in its current form. SCP-946-1 responded by pointing out that the future form could easily be superior. SCP-946-2 agreed with Dr ███████, who continued to argue with SCP-946-1 for nearly two hours before, frustrated, SCP-946-1 gave up. Containment procedures updated in light of this event. Object Class upgrade to Keter pending approval.