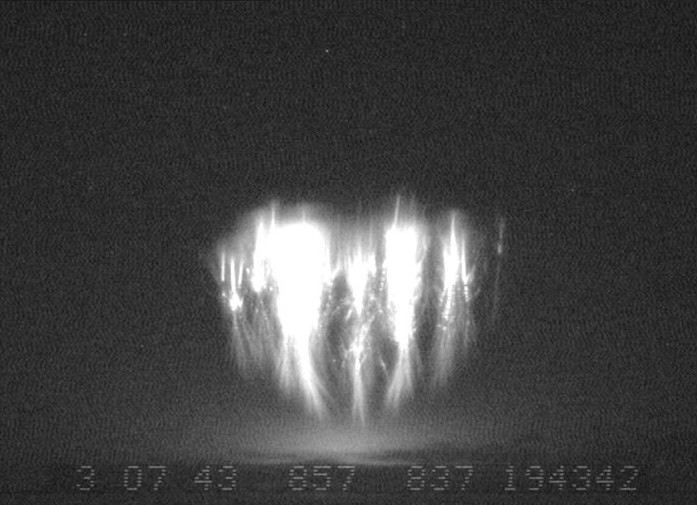 SCP-938 is to be contained within Capacitor Bank Zero at Bio-Containment and Research Site-06 Bio-Containment and Research Site-07. This bank is to consist of 427,500 EPCOS B4345 capacitors, maintained within Storage Warehouse Zero. Storage Warehouse Zero should be constructed of unreinforced high-strength concrete, its interior walls, floor, and ceiling lined with 5cm of insulating PVC. The structure must be devoid of electrical wiring and systems; lighting should be provided by fiber-optic cables routed underground from adjacent structures. Neither the fiber-optic cables nor their cladding may be electrically conductive. Storage Warehouse Zero should be a minimum of fifty (50) meters from adjacent structures.

Capacitor storage racks are to be positioned over the warehouse's built-in floor drains. Capacitors containing SCP-938 appear to seep a dark red fluid, identified as [REDACTED] blood, in a manner visually similar to condensation. This is normal, and not a sign that SCP-938 containment has been breached. This phenomenon may be ignored, provided Storage Warehouse Zero's floor drains remain unobstructed and precautions are taken to ensure this blood does not interfere with capacitors positioned below. Should this phenomenon cease, site command is to be immediately informed of a potential breach of containment.

Both the structure and Capacitor Bank Zero should be inspected by four (4) Class D personnel supervised by two (2) Clearance Level Two research personnel and at least one (1) Clearance Level Three security officer weekly or immediately following any electrical storm occurring within twenty (20) kilometers. No electronic devices are to be brought into Storage Warehouse Zero without prior authorization of Level 4 research staff. Personnel implanted with pacemakers or metallic implants are denied access to the facility. Inspection personnel are encouraged to carry secondary chemical light sources as a precaution against total lighting and power failure.

SCP-938 is a predatory electrical entity. The entity appears to exist as electrical potential of intensity similar to that which accompanies a moderate electrical storm; SCP-938 frequently travels with such storms. It enters electrical grids through lightning strikes, often causing a temporary loss of power. Upon infiltrating an electrical grid, SCP-938 typically selects a single occupied structure to monitor. While dormant within power grids, the only known indication of SCP-938's presence are anomalous readings by devices sensitive to electromagnetic fields (see below).

SCP-938 becomes active upon an electrical storm entering within approximately five kilometers of its current location. Its behavior during this period of activity is characterized by interference with the function of electrical devices (see below) aimed at attracting the attention of individuals within the building. Individuals which attempt to interact with affected devices are electrocuted; in all but two recorded instances, this has resulted in the immediate cessation of all neural impulses. In the aforementioned two instances, only the victims' hearts were stopped; both were successfully resuscitated, and both experienced long-term deleterious effects attributable to SCP-938's assault. See Addendum 11-16-1987 for further information.

Shortly afterward, SCP-938 returns to the atmosphere as lightning, rapidly dissociating to electrical potential and returning to its free state. SCP-938 has on at least one occasion vacated an occupied structure without attempting to attract the attention of its residents or visitors, and twice after (successful) efforts which appeared aimed at attracting the attention of singular individuals.

Periodically, SCP-938 will fixate on an individual; these individuals are designated SCP-938-A. Prior to feasibility of containment, SCP-938 was documented pursuing a single target for thirty-six (36) years, eleven (11) months, and six (6) days until the target died of natural causes. The exact traits which prompt SCP-938 to fixate on an individual are unknown. In twelve of nineteen recorded instances, SCP-938-A were documented to suffer from a number of disorders relating to stress or paranoia, including post-traumatic stress disorder, paranoid schizophrenia, and a number of severe phobias; these disorders are likely the result of extended proximity to SCP-938 and not a criterion by which it bases target selection (see Addendum 04-13-1979).

Addendum 04-13-1979 Several members of MTF Theta-9 have reported subtle hallucinations and a vague sense of unease while in the vicinity of SCP-938. The most frequently reported hallucination has been irregular clusters of iridescent red eyes watching from poorly illuminated areas, including the shadows of personnel, foliage, and in a handful of reports, the night sky; Agent ███████ remarked he once mistook the phenomenon for stars. It is not believed to be a cause for concern at this time.

Addendum 11-16-1987 The deleterious effects suffered by both known SCP-938 survivors are the erasure of significant stretches of memory and drastic alteration of both individuals' mannerisms and personalities. During subsequent evaluation, both professed to experience persistent feelings of depersonalization and derealization. Medical and psychological evaluation results are available to research personnel on request.