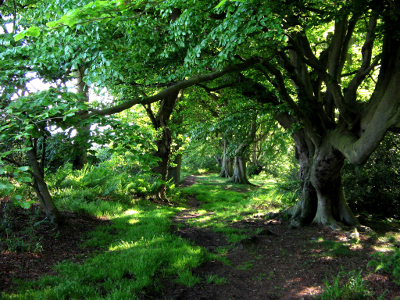 Specimens of SCP-936 are to be kept on the grounds of Bio Research Site-104, enclosed by a fence to prevent unauthorised access, and watered daily. Approximately once a month, the plantation is to be screened for any SCP-936-1 by two (2) D-Class personnel of adequate physical ability and SCP-936-1 are to be harvested according to site plan.

Following Incident 936-1, the D-class personnel performing the screening are to be screened thoroughly for infectious diseases, and are to use sterile gloves and facial filters to prevent contamination.

Uncontained SCP-936 instances are to be dug out and any SCP-936-1 and SCP-936-2 incinerated. For purposes of containment, the Foundation is to ensure SCP-936 is declared an invasive species by local governments; a censored description is to be made public for this purpose.

SCP-936 is a species of deciduous, self-pollinating tree resembling Fagus sylvatica, inhabiting the region of northern and eastern Europe, most notably clustering around ██████, Ukraine. SCP-936 is capable of forming clonal colonies, the ol[DATA EXPUNGED].

It has been shown that the roots of SCP-936 are host to nitrogen-fixing bacteria, similarly to the legumes - as during most of its lifecycle, the plant doesn't display any anomalous properties, checking for unusual soil nitration levels shows promise as an identification method.

SCP-936 is monoecious, and during flowering, specimens can be recognised by an unusually high male to female flower ratio - there are only several dozen female flowers, usually growing directly on older wood. Out of those, on average, less than six continue development, and it is rare for more than a single fruit to reach maturity.

The resulting fruit, classified SCP-936-1 is covered in a green cupule, and rapidly grows towards its ripe mass of app. 85 kg; SCP-936's foliage grows denser in order to cover for the energetic expenditure. Dissection has revealed the inside of SCP-936-1 contains a length of stem wrapping around a structure closely resembling a human body, designated SCP-936-2. Tissue samples obtained from SCP-936-1 physiologically resemble human tissue, possessing functionality in most aspects1, with the exception of ██████, █████ and ███████ █████ which contain a mass of brown-black seeds approximately 3cm in diameter.

As SCP-936-1 reaches maturity, the stem thickens considerably and the cupule wilts, eventually breaking, and causing SCP-936-2 to descend, hanging from the stem which in most cases wraps around its cervical region.

The appearance of SCP-936-2 produced by a single SCP-936 varies in size, visual appearance, and apparent gender with no discernible pattern.

The seeds within SCP-936-2 have a thick skin, and take approximately sixteen months to germinate. However if exposed to an acidic environment (pH < 2), germination occurs within ██ weeks.

Recovery Log: SCP-936 was first discovered near ██████, Finland, after reports of an unusually high reported suicide rate. Intelligence agent ████'s report has revealed this to be due to the statistics including a number of nude hanging victims being periodically discovered on trees in the nearby ████ forest, and the local cemetery, their identity being impossible to determine.

Suspecting a cognitohazard, a perimeter was established around said yard under the premise of widespread bark beetle infection, and the site was placed under observation. During observation period, a new corpse was discovered despite security footage showing no violations of perimeter within assumed time of death. Autopsy revealed anomalies inconsistent with human anatomy; notably, seeds located in [REDACTED]. Agent F████ noted that all victims have been found hanging from a single species of tree, and a thorough examination has resulted in the procurement several samples of unripe SCP-936-1, leading to SCP-936 classification.

SUBJECT: D-821, 25-year-old male.
GRAFT: muscular tissue taken from biceps of SCP-936-2.
RESULT: Muscle graft implanted successfully. Muscular tissue appears to behave ordinarily, and has similar strength/volume ratio. Despite D-821 being restrained for several days due to operation , implanted muscle showed no traces of atrophy. Subject D-821's diet switched to protein-deficient - measurements of rate of muscle loss showed this to be lower by a factor of ██.

Incident 936-1:
On ██/██/19██, one of the D-class personnel tasked with SCP-936-1 harvest, later shown suffering from a rhinovirus infection, transmitted the virus onto at least one SCP-936-1. The infection spread through as of yet unknown means, causing a crop failure SCP-936, heavily delaying research progress. Removal of infected/dead SCP-936-1 successful in halting infection progress.