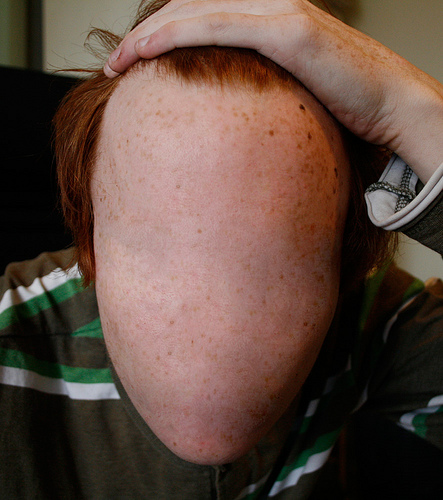 In the event of SCP-933-02 or any affected subjects escaping, all personnel are to activate their flares first and don the protective goggles second. Maximum force is authorized to restore containment.

SCP-933-01 appears to be an innocuous roll of duct tape. Attempts to unroll it by non-affected personnel have proved ineffective.

SCP-933-02 appears to be a man in a cloak who has absolutely no facial features. All affected subjects bear the same condition, but the rest of their bodies appear as they did before their incidents.

While all affected subjects have identical behavior to SCP-933-02, none of them possess its formidable strength or resilience. Affected subjects have been terminated with no more force than it would take to kill an ordinary person. During Incident-933-004, SCP-933-02 sustained 57 bullet wounds before collapsing, which it healed from over the following 238 days.

While in possession of SCP-933-01, SCP-933-02 will attempt to pin anyone it can perceive, going after the closest targets first. Once SCP-933-02 has pinned a subject, it will unroll SCP-933-01 and place it over the subject's eyes, ears, nose, or mouth, with no preference. It will then remove SCP-933-01, completely removing that facial feature. Autopsies have shown that the amount of damage is considerable, with the affected feature being completely filled in with flesh and bone. SCP-933-02 will continue to do this until it is stopped or all facial features are removed, at which point the subject is to be treated the same as the other affected subjects.

Subjects afflicted by SCP-933-01 will experience a strong compulsion to acquire SCP-933-01. This compulsion is augmented by an unexplained mechanism allowing them to locate SCP-933-01 at long distances.

For reasons unknown, SCP-933-02 has shown that it is unable to perceive living things that are within 1 meter of a 100 lumen light source. This range increases with the brightness of the light source.

SCP-933-02 has demonstrated that it can cause electronics to fail merely by being around them. This ranges from electronic lights losing power to electronic locks failing in the unlocked position. The extent of this ability is not known.

SCP-933-02 has never directly harmed any personnel, preferring to destroy their weapons and then make use of SCP-933-01.

Partial victims must never come into contact with SCP-933-01 and are to be transferred to any other facility immediately. All partial victims that have remained at the facility have become obsessed with the idea that if they could handle SCP-933-01, they could get their facial feature(s) back. In all cases, the subjects merely finished removing all of their facial features.

Transcript of the Post-Incident-933-002 Interview of Agent ████████:

Dr. ██████: How are you feeling, ████████?

Agent ████████: Who is that?

Agent ████████: Oh. It's good to… hear you again, I guess. How do you think I feel? I've lost my goddamned eyes! I'm gonna be stuck guarding 689 or some shit like that.

Dr. ██████: I'm sorry, but you know how things work around here.

Agent ████████: Yeah, yeah. As long as we're useful, we do useful things. But it's worse than just that. Worse than losing all the time I put into sharpshooting. What really drives me nuts is that no one talks to me anymore.

Dr. ██████: I'm talking to you.

Agent ████████: You have to. You're the one writing the report. It's like as soon as I lost my eyes, I stopped being a person.

Dr. ██████: I'm serious. The only reason I haven't come to see you until now is because all of this damned paperwork. We'll still go to ███████████ every other Friday. You'll just have to wear sunglasses.

Agent ████████: Sure we will.

Agent ████████: Doc, I've been thinking about the tape. It was the thing that took my eyes. It should still have them, right? Maybe, if I could just get my hands on it, I could get them back.

Dr. ██████: No one else has been able to use it, but I'll make some calls and see what I can do.