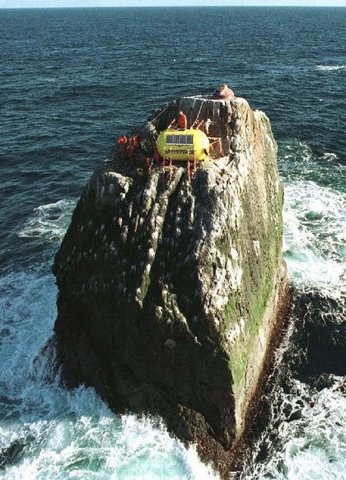 Visit to SCP-908 by Dr. Garcia, Dr. Patel, and Agents ██████ and ████ during a period of unusually clear atmospheric conditions.

The vicinity of each location of SCP-908 is to be patrolled by a marine vessel crewed and equipped in accordance with the specifications in Document 908.2321.AE4C. Audio and video monitoring equipment are to be placed on the islet and repaired or replaced as necessary.

SCP-908 is a partially-submerged rocky islet. The exposed rock above the waterline measures approximately 30 meters in length and 25 meters in width, and rises to a height of approximately 22 meters above the waterline. The rock is composed of granite. The vertical rock face contains carved inscriptions in the Old Ge'ez script which are too eroded to be read clearly but appear to indicate that the rock was visited by Ethiopians in the fourth or fifth century BCE. Near the waterline, there are also carved glyphs that resemble the oracle bone script used in Shang-dynasty China, but the weathering of the carvings indicates that they were added relatively recently, probably within the past two centuries. The only macro-organisms inhabiting the islet are various lichens and small mollusks, although portions of the islet are also covered with seabird guano.

The islet is a geographic anomaly; it is located in several different places at once. The islet's colocation properties extend to objects in physical contact or close physical proximity to the islet. Investigations have shown that at present, the islet is concurrently located at the following terrestrial locations:

The islet also appears to be located at at least one non-terrestrial location; see test log.

Atmospheric and water temperatures, and the salinity of the surrounding water, remain relatively constant regardless of the time of day or year that the islet is visited, or the point of origin from which it is approached. The islet is also typically surrounded by a mist or fog which, even under the best lighting conditions, limits visibility to no more than 40 to 50 meters. Lighting conditions vary, at unpredictable intervals, from a condition comparable to a foggy, overcast day to total darkness.

Footnotes
1. A connection between this torpedo and SCP-1142 has been theorized due to similar designs between the two.
SCP-907 SCP-909