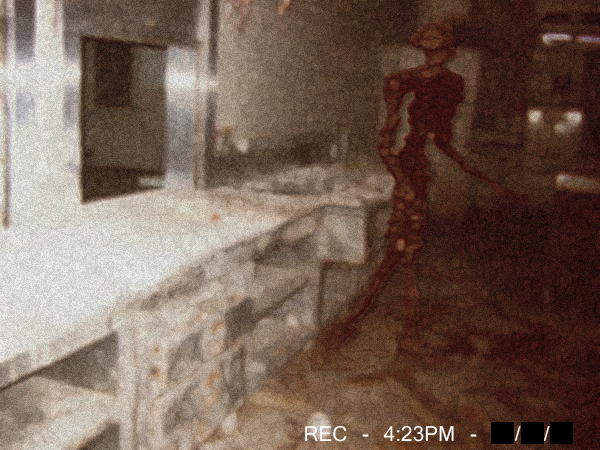 Image of SCP-906's humanoid form at initial site of discovery from video camera used in capture.

Subject is to be contained in a three (3) by three (3) meters squared, fully airtight, twelve (12) centimetre thick titanium enclosure surrounded by acid-resistant glass. Temperature must be kept under 5 degrees Celsius. Should temperature exceed this limit, all personnel are to be evacuated to a distance of at least one hundred (100) meters. Immediate area containing enclosure will then be locked down until temperature has been lowered. Holding cell is to be maintained on a bi-weekly basis and checked for sufficient corrosion or gaps. Any damage to holding cell is to be repaired immediately.

SCP-906 is to be monitored at all times from four (4) digital cameras mounted on each corner of the enclosure. Any abnormal behaviour reported from these cameras will result in immediate lockdown of area around containment cell. Access to SCP-906 is permitted only to supervised Class D personnel for feeding and/or enclosure maintenance. SCP-906 is to be fed 80 kg of raw meat every forty-two (42) hours.

SCP-906 is a writhing mass of dark brown, worm-like invertebrates. These organisms seem to interact in a uniform fashion, forming a colonial "superorganism" in a similar manner to army ants. For reasons currently unknown, SCP-906 will usually form its "body" into that of a very rough, humanoid figure. SCP-906 is shown to be capable of crude bipedal movement when in this state; however, when travelling longer distances, it will deviate to a flattened mass with a greater efficiency of movement.

SCP-906 is capable of secreting a viscous, highly corrosive, semi-translucent fluid, similar in colour to its skin. This substance is shown to have an acidic strength comparable to hydrofluoric acid, but it has a less pronounced effect on titanium, no effect on acid-resistant glass and [DATA EXPUNGED]. This substance displayed the ability to destroy teeth, bones, hair, nails, clothing, jewellery, and some kinds of equipment in under an hour.

SCP-906 is predatory and highly aggressive: when hungry, it will swarm over any living creature within its path and coat them in its acidic secretion, thereby breaking down the matter into a liquid slurry which it then consumes. Attempts to remove or disturb SCP-906 during its feeding have proved fruitless. When a designated prey is nearby, SCP-906 will alter its form into that of a flowing "carpet" and move across any surface in order to pursue its target until the prey is captured. Due to the small width of SCP-906 component organisms (two (2) centimeters wide), barriers will only slow its advance. Obstacles that cannot simply be passed will be destroyed by the acidic substance SCP-906 secretes. SCP-906 has also displayed the ability to take alternate routes to reach its prey such as drainage pipes and ventilation shafts.

Through methods currently unknown, SCP-906 appears capable of mimicking animal like sounds and "parroting" human speech in what is described as "a raspy, hoarse voice" while in its humanoid form. SCP-906 appears to use this ability to lure prey into areas that are difficult to escape, such as deep pits or maze-like corridor networks. Eyewitness reports from containment breach 906-2-10-01A detail SCP-906 "taunting" prospective victims and even emitting a sound "something like laughter" before attacking its prey. This behaviour suggests a kind of rudimentary sentience, but it is unknown how a creature comprising several thousand individual organisms is able to achieve this.

SCP-906 specimens, when removed from the larger "body", will attempt to move back toward the central mass and have been known to dissolve through any obstacles in their way. It should be noted that individual specimens do not show the same level of navigation skills as the full superorganism. Specimens of SCP-906 have the ability to reconstruct into multiple versions when damaged in a similar manner to common earthworms, i.e. splitting one SCP-906 specimen resulted in each half growing into separate organisms.

Despite this, SCP-906 specimens have been destroyed via means of incineration, freezing, and full body disintegration. Should the need to destroy SCP-906 ever arise, use of flamethrowers or liquid nitrogen is permitted. However, SCP-906 specimens will split themselves and "multiply" over the course of several hours should the larger mass be severely reduced. If SCP-906 is ever required to be terminated, all specimens must be eliminated to prevent SCP-906 reforming. In order to keep SCP-906 in a more controllable state, the enclosure it is housed in is to be kept at a temperature below five (5) degrees Celsius at all times as this is shown to reduce the movement, reaction time, reproduction abilities, and metabolism of SCP-906.

Addendum 906-05-01 Testing of SCP-906 resulted in a Class D being targeted before a cow. A second test was then conducted in this manner wherein a pig, sheep, dog, and horse were all placed alongside a Class D. SCP-906 once again targeted the Class D first. Second targeted animal was the pig, followed by the sheep, the horse, and finally the dog.

Addendum 906-05-02 During routine enclosure maintenance, SCP-906 reportedly "spoke to" a supervising staff member by saying his name several times. The reason it did this is unknown and the staff member, one Dr. Anthony Richards, reports being "very disturbed" by the proceedings and has expressed a desire to be kept away from SCP-906 in future.