SCP-899 is contained in a rough patch of forest in Rocky Mountain National Park. The SCP-899 phenomena has not been able to travel more than than five meters beyond a standing, living tree, thus the area has been isolated by creating a continuous fire-break around the affected region. Three park service cabins are staffed by Foundation agents on the borders of the site for the purposes of preventing hikers and travelers from attempting to enter SCP-899. Agents are authorized to administer Class B and C amnestics to any trespassers. Children who enter SCP-899 cannot be recovered, and containment must be maintained by removing those who have knowledge of the child's last whereabouts or by planting false evidence of death by natural causes elsewhere in the region.

Agents who come into physical contact with SCP-899 must undergo regular psychiatric evaluation.

As the SCP-899 phenomena has become increasingly more violent, all trees within five meters of the observation cabins have been removed. Personnel entering SCP-899 must do so in pairs and carry sidearms with custom iron ammunition.

SCP-899 is a psychic and telekinetic phenomenon that most commonly manifests as groups of hostile phantom children. Travelers in the area have reported being pursued and harassed by small shadowy figures that curse and throw rocks in an attempt to drive them out of the immediate area. The figures tend to be featureless and it is usually difficult to determine if they possess any gender or even individual voices and behaviors. Failure to leave the area will result in an increase of aggressive behavior culminating in a direct physical attack by the entities. An adult who comes into physical contact with one of the entities will suffer the loss of all detailed memories prior to the onset of puberty. General knowledge of family members and living conditions will remain, but persons who have been affected by this memory loss often display a significant change in personality. The most common symptoms are a loss of impulsiveness and curiosity, and negative responses to attempts at humor. Affected persons also tend to become highly impatient with children regardless of their prior behavior.

Pre-adolescent children who come into contact with the entities will physically disappear, after which some or all of the entities may take on parts of the lost child's appearance. No attempt to communicate or find the whereabouts of a child lost in this way has yet been successful. Adolescents who have not fully matured past puberty are [DATA EXPUNGED]

Although more detailed manifestations have been encountered within the area, no attempts to communicate with the entities within SCP-899 have resulted in anything but attacks on Foundation personnel. Items made of iron or [REDACTED] are useful in warding off direct contact with the entities; however, as confrontation of the phenomenon is not required to contain it, no tools containing [REDACTED] have been allocated to SCP-899.

Travel through the area is also hindered by a spatial anomaly that makes land navigation difficult. Compasses and GPS navigation systems will give false directions and trails through the underbrush will change course. Although there are occasional sounds of wildlife within the affected area, no wild animals or tracks have been observed within the range of SCP-899's effect. Animals brought into the site are also subject to attacks by the entities, although they will not attempt to make physical contact.

Experiment 899-1: Conducted March 23rd to May 15th 2009. SCP-573 was transferred to SCP-899 to test its effect on the child-like manifestations. SCP-573 is successful in driving away the manifestations, although the spatial anomaly that complicates land travel within the area remained. Due to the harmful effects of prolonged exposure SCP-573 was returned to containment at the conclusion of the experiment.

SCP-573 should be contained here with SCP-899 as they can effectively be used to cancel each other out. There are no children or animals to be exposed to SCP-573 inside this place. Please reconsider and return 573 to my care. -Agent W███████ 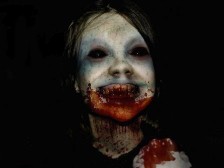 Incident Report 899-25: June 10th 2009. A new manifestation has been encountered in SCP-899. The entity took the appearance of an adolescent male covered with bloody wounds. Rather than the normal interaction it immediately attacked Dr. ██████, resulting in severe lacerations and distinct bite marks on the arm, neck and upper thigh. Dr. ██████ is undergoing treatment and quarantine.

Incident Report 899-26: June 13th 2009. Dr. ██████ is released from quarantine with no permanent damage beyond scarring. Dr. ██████ passed a psychiatric examination with expected results and has been able to give detailed recollections from his youth despite physical contact with SCP-899. The new manifestation has been classified SCP-899-1.

Incident Report 899-27: June 20th 2009. SCP-899-1 manifestations have been increasing in number and have been observed in direct conflict with other manifestations of SCP-899. SCP-899-1 has also attacked the cabin on the northern border and started a fire which resulted in the death of Agent W███████.

Although SCP-899-1 can be deterred in the same manner as SCP-899, the new manifestations display a significant increase in aggression with intent to kill. Research suggests that the change in SCP-899's phenomena is related to exposure to SCP-573. No further cross-SCP experimentation with SCP-899 is allowed at this time per O5 order.