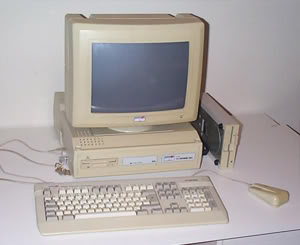 Access to SCP-892 is permitted strictly under O5 supervision and for the sole purpose of attempting to identify the location of SCP-892-2. In the event that the SCP-892-2 is located, all O5 personnel are to be alerted and Mobile Task Force Mu-4 (aka "Debuggers") is to be dispatched.

In the event of containment breach, SCP-892 is to be defended at all costs. The risk of SCP-892 falling into the wrong hands could have catastrophic results for the Foundation as a whole, as well as the rest of the world. In the unlikely event that Site ██ is to be overrun, SCP-892 is to be decommissioned immediately.

SCP-892 is an Amstrad 286 Personal Computer with accompanying mouse and keyboard, running a version of Microsoft Excel 92. Attempts to export and import save files result in corruption of said files. Attempts to install and uninstall software are likewise met with failure.

Upon its discovery, SCP-892 was found containing a single .xls save file titled "ESO%HF-V6.31.01", hereby designated SCP-892-1. This save file is impossible to delete, copy, rename, export, modify, or overwrite in any shape or form. Although creating additional .xls files is possible, none have thus far shown similar anomalous properties. Contained within each cell of SCP-892-1 is a string of information written in plain-text English. Each cell, as well as the contained string, is believed to correspond to a currently living individual. This string can contain information as mundane as what that individual ate for breakfast, their occupation, or their shoe size, to information as personal as their first sexual encounter, a thought they had that morning, or their greatest phobia. These cells refresh daily, displaying a different string of information each time. Should a recorded individual die, the corresponding cell will, upon the next refresh, display their name, and time and cause of death.

At the time of discovery, SCP-892-1 was found to contain approximately 84,500 by 84,500 cells, slightly over 7 billion. Despite the belief that each cell corresponds to a single person, this amount was greater than Earth's estimated population at the time. Additional rows and columns have appeared regularly since then, the rate of growth slightly greater than that of Earth's population.

The following is by no means an exhaustive list.
For a complete list of cells examined so far, please consult attached document L892-A.