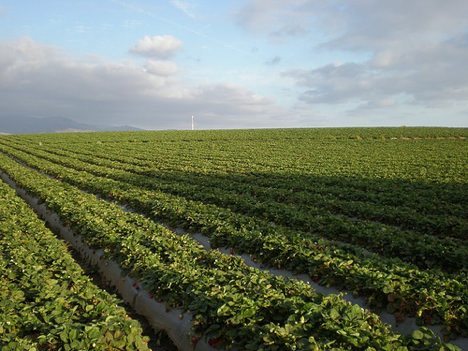 SCP-891 is to be surrounded by a one-half kilometer buffer zone, purchased by the Foundation under the guise of a peach farm. Foundation agents are to deter any civilians from entering SCP-891. A ten meter fence is to surround SCP-891 in order to prevent unauthorized entry. Intruders discovered within the grounds of SCP-891 are to be apprehended, administered Class A amnestics, and released. Planting vegetation of any kind in SCP-891 requires the permission of Level 4 personnel. Apple trees are never to be planted in SCP-891; all animals that carry the potential to deposit apple seeds via fecal matter in SCP-891 are to be deterred from entering SCP-891. Any vegetation that sprouts in SCP-891 as a result of seed deposition by wind, bird, or other natural causes is to be immediately incinerated.

SCP-891 is a field located in █████, California. The dimensions of SCP-891 are one and a half by one kilometers. Any plant that bears edible fruit is able to grow in SCP-891, regardless of previous soil or climate needs. Plants planted in SCP-891 experience moderately accelerated growth and seem to require abnormally small amounts of water and sunlight to grow. Fruits produced by plants inside SCP-891 are larger than average and have been said to “look delicious.” Chemical analysis has revealed that compounds responsible for producing appealing texture, flavor, and aroma are abnormally high in SCP-891's fruit. Attempts by Foundation staff to render the soil of SCP-891 incapable of supporting vegetation have been unsuccessful; salting SCP-891 had no effect. However, once salted soil was removed from the grounds of SCP-891, it behaved as expected and did not support vegetation.

Attempting to ingest any fruit, with the exception of apples, grown in SCP-891 results instead in the consumption of the subject's own internal organs. Autopsies have revealed that damage to internal organs is consistent with bite patterns made by subjects on bitten fruit. Most subjects, even after the initial bite, continue to consume the fruit, claiming that it "is delicious." Subjects are oblivious to any pain that would normally arise from extensive damage to the internal organs, as well as to the fact that they are consuming their organs, as opposed to a fruit. After three to four bites, the subject usually dies of internal bleeding and trauma, though subjects can remain alive if the targeted organ is non-vital. Cutting, slicing, or usage in cooking does not negate the fruit's effects.

Addendum-891A SCP-891 was brought to the Foundation’s attention when an abnormal number of missing person reports was filed in █████, California. All missing persons were last seen at ██████████ Strawberry Farms, the previous name of SCP-891. Police and government investigations did not return within seventy-two hours, which alerted Foundation members stationed in the nearby city of ███ ████. Foundation staff eventually apprehended ██████ ███, the owner of the farm. Searches of ███’s house revealed [DATA EXPUNGED], and psychological testing found ███ to be clinically insane. ███ was subsequently terminated. No apple trees were found when SCP-891 was originally recovered. It is possible that Mrs. ███ was unaware of [DATA EXPUNGED]. Since the Foundation's acquisition of SCP-891, there have been ███ counts of natural deposition of seeds in SCP-891; seventy five percent of these natural depositions have been the deposition of apple seeds. It is unknown if the disproportionate number of apple seeds being sown by natural causes in SCP-891 is an effect of SCP-891 or simply bad luck. Despite the Foundation's efforts to prevent fecal deposition of apple seeds within SCP-891, apple saplings are reported to spring up on a semi-regular basis. It is unknown how these seeds are sown in SCP-891. Requests for reclassification to Euclid have been denied. Due to the nature of [DATA EXPUNGED], permanent construction of a rapid-response establishment around SCP-891 is under consideration.

Addendum-891B Analysis of documents found within ███'s home has revealed ███'s history of misanthropy and paranoia. Certain texts, notable in that they are not written in ███'s handwriting, seem to be primitive blueprints for SCP-891; efforts are being taken by the Foundation to discover the artist. Notes made by ███ in the margins indicate that ███ had little understanding of the content of the blueprints. A recipe was found within ███'s kitchen for a cherry, peach, raspberry, and blueberry fruitcake. Bodies were found in ███'s backyard; internal organs of bodies were found to be pulverized beyond recognition.

Addendum-891C On █/██/████, a batch of fruit exhibiting properties identical to those found in SCP-891-grown fruit was found to have reached a supermarket in █████. It is believed that this was caused by a security [DATA EXPUNGED], though it is unknown if [DATA EXPUNGED]. Fortunately, no apples were present in the delivery. All witnesses have been administered Class B Amnesiacs; casualties have been attributed to a gas leak. Foundation investigations in order to determine the source of said fruit are underway.