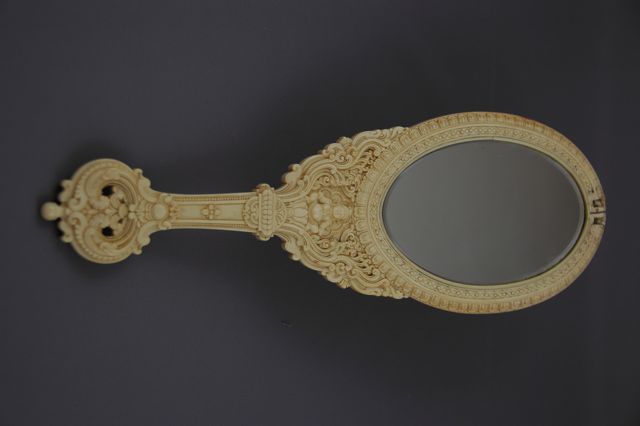 SCP-884-4 is a men’s shaving mirror, made of glass and ivory, presumably constructed at some point around 1914. It is the last remaining object in what was originally a complete set of men’s grooming tools, the others having been lost to testing and theft early this century. (Other notable examples included SCP-884-2, alias “The Razor,” which was stolen by the Chaos Insurgency during their split with the Foundation, and SCP-884-6, alias “The Comb,” which was neutralized following Incident SCP-884-6-4172. For additional information on the remaining objects classified as SCP-884, please see file SCP-884: Original Collection.)

SCP-884-4 possesses a mild hallucinogenic quality. Subjects who have used it while shaving reported an inability to perceive the removal of hair, causing repeated attempts to shave areas of the face that, in reality, have already been shaved. This usually results in irritation and has, in one instance, contributed to the accidental severing of the carotid artery. Other than this, no significant effects have been recognized. As of December 12, 19██, SCP-884-4 is remanded to Storage Locker 147 at Site-██. See Addendum 884-4-9 and Addendum 884-4-10.

Addendum 1: SCP-884-4
At the insistence of Insurgency Defector A████, one of three operatives to openly approach the Foundation with information about the Insurgency and request the opportunity to rejoin, Foundation officials have ordered SCP-884-4's containment staff to move the object to a safer location at Site-██.

Addendum 3: SCP-884-4
April 11, 195█, Recovery Report SCP-884-4: Successful raids on suspected Insurgency storage locations resulted in the recovery of SCP-███, SCP-884-4, SCP-███, and no fewer than █ anomalous objects. SCP-884-4 was discovered in an Insurgency Lab, with several extensive experiments set up, including [DATA EXPUNGED] and [DATA EXPUNGED]. Agent Jones and Corporal Blake are credited with the recovery of SCP-884-4 at great personal peril. Both have been awarded [DATA REDACTED] for their actions, as well as one week paid leave. Dr. Cho has been provided with a lab and staff to reconstruct Insurgency research.

Addendum 4: SCP-884-4
Extensive testing has concluded that the Insurgency's testing was without purpose. SCP-884-4 is remanded to storage at Site-██. For a full report of testing and trials, please see attached document SCP-884-4-███████.

Addendum 5: SCP-884-4
October 2, 19██, Concerning Insurgency Action 327: The Chaos Insurgency staged an attack on Site-██, losing approximately ████ (█) of their number. The only target of the attack, circumstantial evidence has led officials to conclude, was SCP-884-4's containment locker. By order of O5-██, testing on SCP-884-4 has been slated to resume.

Addendum 7: SCP-884-4
Report of Dr. Rasmusson, January, 19██: After two years, continual tests have repeatedly shown no additional abnormalities in SCP-884-4. Due to the persistence of the threat by the Insurgency, it is recommended that extreme care be taken in protecting SCP-884-4, and Agents be assigned to uncover the information the Insurgency apparently has concerning SCP-884-4.

Addendum 8: SCP-884-4
Field Transmission of Agent L█████, 20██, Upon Receiving Final Communique of Agent P█████: Following the deep cover placement and reception of Agent P█████, significant information concerning SCP-884-4 has come to light, most having originally been removed from Foundation files before the split with the Insurgency by members of the faction, particularly the head researcher, Dr. G████. SCP-884-4 must be placed in secure lock down, and all Foundation employees who have come in contact with it must to report to Dr. S████ for immediate examination. Final report will be submitted to O5 via personal courier within 24 hours.

Final Report of Agent L█████: Having now worked on this case for close to eight years, it is with some pleasure that I close it. SCP-884-4 has been a continual mystery in containment circles, with the interest of the Insurgency (including the sacrifice of no fewer than twenty of their members) in acquiring the object leading to much interest. It was only after the Foundation's own agents were successful in discovering the motives of the Insurgency that the truth has come to light. Even then, the full ramifications may never be discovered.

In addition to its vaguely unsettling effect, SCP-884-4 had a longer term symptom that was not discovered during testing due to the regular terminations of Class-D subjects. Between four to seven years after exposure, victims of SCP-884-4 begin to experience what Dr. S████ has called "doubt." Symptoms begin subtly, generally notable only as a checking and rechecking of reports and results, making sure doors are locked, etc. The early onset is almost indistinguishable from mild obsessive compulsive disorder.

Later symptoms develop over the following two to six years, resulting in an increasing disability to create "final" reports, struggles to make simple choices, and, eventually, a complete inability to make decisions. Thus far, Dr. S████ has found no way to cure these problems, and personnel affected are to be placed in low-risk positions. Until later stages set in, they have been discovered to be extremely useful due to their fastidiousness, and the Foundation has saved significant resources by using them in this capacity.

As for the involvement of the Insurgency, it is the opinion of this Agent that their motives were simple. They wanted the Foundation to experiment on SCP-884-4, specifically to infect more and more members of the Foundation. Due to the mundane nature of the work and the low level of researchers assigned in a long-term capacity, close to ████ ████████ (████) separate instances of infection have been discovered, more than ███ times the number of personnel they themselves have lost. Examination of causes of death from practically every person associated with research on SCP-884-4 had to do with an inability to make a crucial decision at an important moment. Agent Jones, for example, hesitated a moment between drawing his weapon and running when confronted with SCP-███ in 195█, resulting in his death. Dr. Cho drowned in 19██, presumably unable to decide it was time to get out of the bath.

This has been one of the most elegant and long term plans the Insurgency has ever enacted, and its efficacy is obvious. Recommend immediate investigation into the SCPs known to have been examined by the previous members of the Insurgency and the temporary freezing of any ongoing research in the interim.