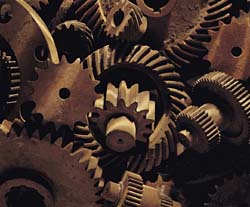 SCP-882 is to be kept in a fluid environment at all times, consisting of no less than 40% seawater. Object is to be kept suspended by non-metallic means, currently cotton fiber line that is to be changed daily. Object is also to be checked daily for any signs of rust flaking. If any part of SCP-882 appears uncoated with rust, it must immediately be immersed in a 100% seawater solution. Water must be taken directly from the ocean. Reduce concentration only when the object is again coated in rust.

Any auditory issues reported by staff must be reported immediately, and affected personnel must submit to a full psychological examination and, depending on results, either transfer to another facility or permanent containment at [EXPUNGED].

SCP-882 appears to be a random assembly of gears, cables, pulleys, screws, and belts, all made of an amalgam of various metals. Object's size at time of recovery was approximately eighty-seven cubic meters. Current size is approximately twelve cubic meters. SCP-882 rusts quickly in seawater. No identifiable energy source has been found, but all components will begin to move if not coated in rust. SCP-882 is completely silent at all times, no matter what level of activity SCP-882 reaches.

Any metal touching the object will become permanently affixed to it, and over a period of a few days becomes a new part of the object. Organic matter remains unaffected. SCP-882 is extremely resilient, with tensile strength and toughness above those of aircraft grade titanium alloy by weight, even though its composition appears to be a random alloy of iron, tin, gold, and other metals, some as of yet unidentified. Extreme, focused heat must be applied over several hours to cut even a small portion free of the main assembly.

Persons remaining in the vicinity of the object for prolonged periods have developed auditory hallucinations while near the object, mainly the sound of grinding and clicking. The sound intensifies, and is abated only by throwing metal into the object. Subjects in advanced states of psychosis have thrown themselves into the object, resulting in almost instant death by crushing. The body is often drawn in, and impossible to recover.

SCP-882 was recovered from a location at the north-east coast of Banks Island. Area was barren of all metal and metallic ore in a one mile radius. SCP-882 was found at the geometric center of the area. SCP-882 had become submerged in seawater at the time of discovery. A small town was found nearby, abandoned for several years. SCP-882 was removed, and shortly started to flake off rust, causing the varied parts to begin motion. After several accidents, Dr. Gears authorized SCP-2519 to be played on loop, which successfully reduced the object's motion, enabling safe access. SCP-882 was then cut down and contained on site.

Note: SCP-882 is not to be brought into the vicinity of SCP-271 or any subject possibly contaminated by SCP-217.