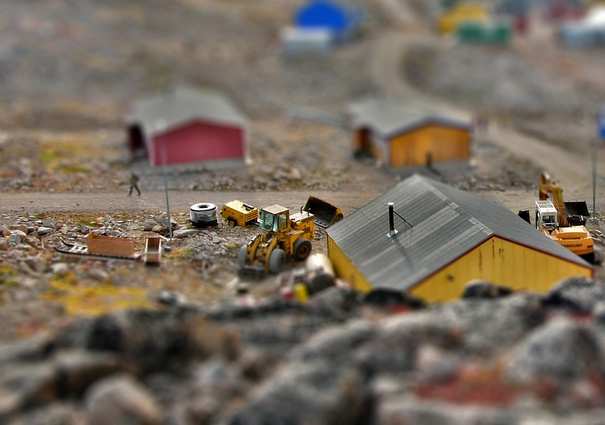 All instances of SCP-881 are stored in Daleth Basement of Site-35. Daleth Basement's air and water filters must be checked and cleaned weekly, as well as after any research extraction or insertion. SCP-881 instances grow their own food provided the artificial sunlight is continually functioning.

SCP-881 is composed of 9891 instances, each representing part of the former human, animal, and plant life of the cities of ███████ and ████████, which underwent a spatio-physical transformation during the containment and destruction of SCP-███-D. The instances of SCP-881 have been shrunk to a fraction of their former size: the scale varies from subject to subject, such that the largest human is roughly 15 cm tall and the smallest is roughly 2.5 mm tall.

The physical conditions that allow for SCP-881's continued existence have been detailed by Dr. Forbes in [DATA EXPUNGED]. The "Forbes effect" allows the SCP-881 instances to breathe regular air, metabolize regular or differently-scaled food and water, and otherwise interact with matter in different scales. SCP-881 instances can communicate verbally, though the smallest instances are nearly inaudible to anyone but themselves.

Self-aware instances of SCP-881 are numbered individually, in order to keep track of social relationships. Since the incident and subsequent isolation, instances of SCP-881 have formed a distinct social structure between themselves. Instances SCP-881-2166 and SCP-881-1144 are currently nominated the "leaders" and managers of the population.

Interviewer: Mr. Hexton, you assured me that the sterilization procedures were carried through 100% of the population.

SCP-881-2166: Yes, well, sorry. You know it's hard to keep track of what the inchers do in public, let alone in private. (Note: "inchers" is the term SCP-881 instances use for those of themselves below 5 mm in size)

Interviewer: Before I go into length regarding the meaning of "a hundred percent", Mr. Hexton, let me point out that we have a record of two new instances on the 5 cm to 10 cm range.

SCP-881-2166: I… honestly don't know what happened, chief. I saw the doctor clip one of those women, and he assured me the other was just the same.

Interviewer: If these couples do not report on how they bypassed sterilization, we will consider more intrusive means, Mr. Hexton. Do not think we won't.

SCP-881-2166: Hey, chief, these are ████████ citizens. They're all stressed, they want to know what you guys are doing to get us to regular size. A schedule or whatever you scientists use, you know?

Interviewer: You are not ████████ citizens any longer and you will know when we deem it proper. Now if I hear of one more child, we're cutting all entertainment feeds.

Forbes> is this tone really necessary, dammer? these people are traumatized enough as is.

Dämmer> SCP are not people, Forbes. Did you skip basic personnel instruction?

Continuity of research on reversal of Forbes effect.

In the past month, two researchers (Dr. ██████, Dr. ████████), as well as six D-Classes [REDACTED] which previously had been in contact with SCP-881, have reported to Medical with cases of ulcers and internal bleeding in the lungs, inner ear, and other cavities that could be exposed to the air of Daleth Basement.

Ingesting or inhaling matter affected by the Forbes effect may cause cellular damage to living beings. SCP-881 matter reassigned to Biosafety Level 3.

Interviewer: We have not managed to replicate the source of the contamination from SCP-881 yet. The filters show no foreign matter, yet we've lost two more D-Classes. Until we solve this puzzle, you're in lockdown.

Interviewer: You are not researchers, 881-2166. You are test subjects. I misspeak: You are research material.

SCP-881-2166: Ah, but I did just get word of something you scientists couldn't figure out. The unexplained pregnancies.

SCP-881-2166: Turns out this surgeon's been training inchmen as helpers and he's been sewing the women back as a kind of underground resistance. No need for catheters, right? When a guy can just crawl up there and…

Interviewer: You will deliver us this man's designation immediately. Next week, we're initiating radiotherapic sterilization of your entire population.

Interviewer: Be happy we don't throw the whole lot of you into the incinerator. We've been tolerating more than our share of inconveniences in respect that you were humans once, but this is enough. It is time for you to act your size.

All air, food, and water in Site-35 to be decontaminated at 5-nines biological level and cycled. Surviving affected personnel to be screened for cellular damage and remain quarantined pending full decontamination. SCP-881 matter is reassigned to Biosafety Level 4 and is barred for research until containment procedures are revised. Minimal size of SCP instances to be revised pending examination of captured instances of SCP-881-9892 through SCP-881-34416.