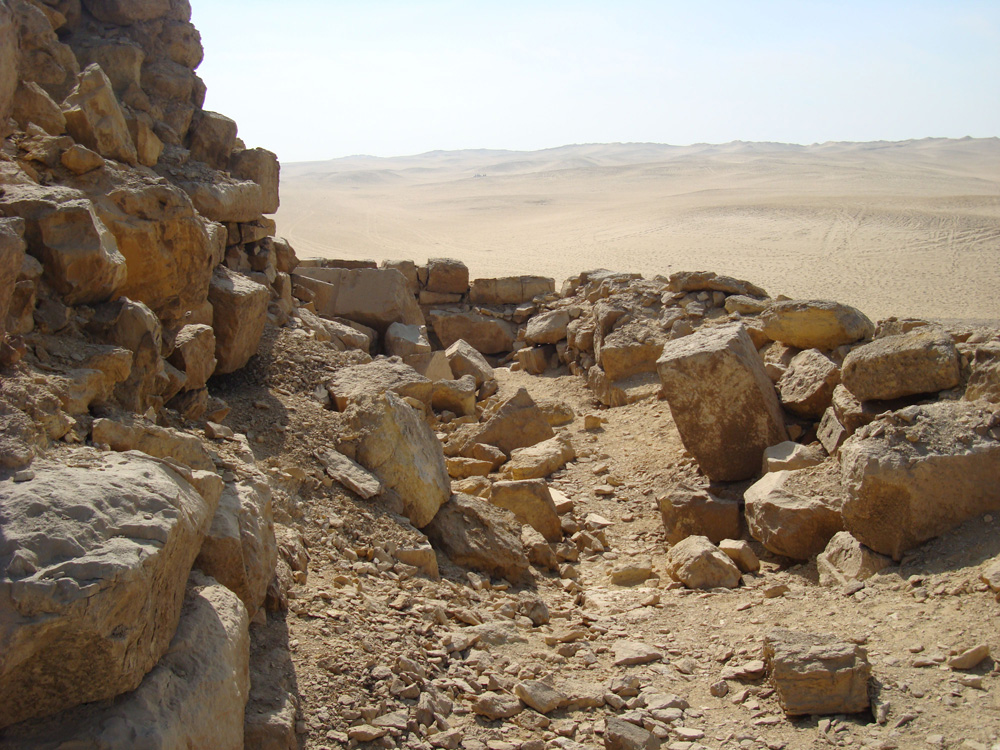 SCP-875 is to be marked on all maps as a military base, and all satellite images taken of the area are to be altered according to Procedure Watson-24. Any civilians approaching SCP-875 are to be brought into Foundation custody and dosed with a Class-A amnestic. After dosage, civilians are to be returned to the nearest city to SCP-875, █████.

SCP-875-1 stings are to be treated by on-site medical personnel using alkali prescribed in Medical Chart 875-1-1. In extreme cases, amputation of affected limbs is authorized.

In the event of specimens of SCP-875-3 becoming active, security personnel are to respond immediately and subdue specimens in a non-fatal manner. Specimens are then to be transported to Site ██, where research staff will take over the operation.

SCP-875 is an underground pyramid estimated to be ████ years old and located in the ████████ Desert. No evidence of SCP-875's construction exists in records from the period, although evidence suggests that SCP-875 was man-made. The outer layer of SCP-875 is made of regular sandstone, but possesses an inner layer composed of an as-yet unknown alloy.

The first floor of SCP-875, accessible through the entrance tunnel, possesses the layout of a maze or labyrinth. Mechanisms contained within the floor and walls of the maze alter the configuration of this floor every forty-eight (48) hours. Notably, the hallways in this section of the structure appear to have been constructed with entities much taller than humans in mind. Several pressure plates and hidden levers are capable of opening certain sections of the maze and releasing swarms of SCP-875-1.

SCP-875-1 are small flying insect-like creatures approximately six (6) centimeters in length and three (3) grams in mass. Their appearance bears no similarity to any known species, suggesting extraterrestrial origin. SCP-875-1 possess a highly acidic sting that has been observed to cause severe damage to nerves and tendons. Due to their swarming behaviour, SCP-875-1 attacks can and have resulted in complete liquefaction of limbs.

Due to previous use of explosives, access to the second floor of SCP-875 is not difficult, provided the breached location can be accessed in the maze's current configuration. The second floor of SCP-875 is home to four large vats containing a liquid similar in appearance to water. This liquid will hereafter be referred to as SCP-875-2. Exposure of humans to SCP-875-2 results in effects similar to an amnestic, but with the additions of a sense of satisfaction and happiness.

What appear to be maintenance tunnels lead down to the third floor of SCP-875, which contains a large nuclear reactor that takes up most of the level. This reactor appears to be self-cooling, as it had not experienced meltdown in the period between SCP-875's desertion and its rediscovery by the Foundation. Nevertheless, measures have been undertaken to monitor and maintain this reactor, which appears to power the machinery on the first, second and fourth floors.

Tunneling through the base of the third floor has revealed a small chamber containing what seem to be ten (10) cryogenic stasis chambers arranged in a circle formation. Each stasis chamber contains a large insectoid creature roughly three (3) meters in height and two hundred and forty (240) kilograms in weight. Three (3) specimens appear to have died and heavily decomposed through failure of the stasis chambers and several of the specimens are heavily injured. These creatures are to be referred to as SCP-875-3. (For further information on SCP-875-3 biology, see Autopsy 875-3-1.)

Analysis of several images carved onto the walls of SCP-875's first floor.

1: Two (2) figures (possibly SCP-875-3 specimens) facing each other. One figure appears to be impaling the other with a spear.

2: One figure identical to those in the first image facing a human in Ancient Egyptian garb. Figure appears to be holding some manner of slab. Human figure is facing away from the first figure, perhaps suggesting an unwillingness to correspond.

3: A large chalice with a drop of liquid falling into it. Figure from the first image is standing next to two (2) human figures, who appear to be bowing to it.

5: Figure from the first image is standing next to what appears to be a deceased human figure. First figure appears to be consuming [DATA EXPUNGED].

On ██/██/████, the following transmission was intercepted, the source of which is currently unknown.

After this point, the transmission quickly deteriorated and became unintelligible.