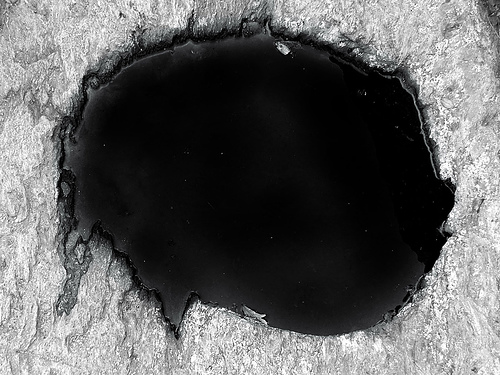 Overhead view of a pool of inactive SCP-874

While not undergoing experimentation, SCP-874 is to be kept in a container such that no horizontal volume of the substance is shallower than 5 cm. The fluid must be in constant motion, such as being stirred. With the Foundation's current supply of SCP-874, this is to be a cylindrical steel vat of radius seven meters and height 10 meters. While SCP-874 is under study, no non-Class D personnel are to be within five meters of the liquid. Any lab in which SCP-874 is studied should be equipped with a winch system of no less than ████ horsepower and with steel rope of 5 (five) cm thickness. All personnel who have been immersed in SCP-874 in its active state should be terminated after study.

SCP-874 is a black, largely unreflective fluid with 30.87 cP viscosity and reflectivity less than a tenth of that of water. When it approaches a static depth of 2 cm, the fluid functions as a portal to a seemingly infinite space. Telemetry into the abyss has led to no conclusive results as to its dimensions. Audio readings and personnel report the sound of distant grinding of metal and stone from this portal. Occasionally, viewers and visual recording equipment can glimpse what appear to be immense rotating ███████ drifting aimlessly in the otherwise featureless blackness.

Assuming, as evidenced, zero gravity, an object propelled through the portal can travel approximately 3000 km before being totally obscured by the very light fog that fills the abyss. Objects partially lowered into the surface cannot be retrieved by any effort less than the recommended ████ horsepower. Later experiments (those after March ██, 20██) revealed that objects left in for more than five minutes are quickly worn away by invisible ████████.

Class D personnel who touched the portal reported that it felt like putting their hand in a cool bowl of water. They were unable to remove their limbs from the surface, reflecting the difficulty of extracting inanimate objects from the portal. The personnel claimed that it felt as though an array of wires were holding them in (video recordings of the puddle showed no change in the skin formation of these participants). After five minutes expired, the limbs were severed, which later examination showed to be due to a large number of irregular, shallow cuts. The first batch of personnel totally submersed in SCP-874 were [DATA EXPUNGED]. The next sequence of experiments were conducted after the winch system was tested with non-living objects, which were safely retrieved if pulled up before five minutes of submersion. When the next group of personnel were retrieved with harnesses, they reported [DATA EXPUNGED] (see Document 874-9). Upon extraction, the group expressed elation and awe. Shortly afterward, they began to self-mutilate and exhibit violent and suicidal tendencies.

Dr ████████: Before you were extracted, what did you see behind the portal?
D-17549: Those eyes. Like they didn't care a bit. How beautiful.
Dr ████████: What eyes? Please explain what you saw thoroughly.
D-17549: And their ██████ were like little knives! And how they played against each other.
Dr ████████: D-17549, you are being uncooperative. If you do not answer the questions I'm asking you, you may have to suffer an early termination.
D-17549: Ah, yes. That would be nice. Please, ask away.
Dr ████████: What did you see whe - wait, did you say "nice"?
D-17549: We saw quite a large number of [DATA EXPUNGED]. Now, I helped you; will you help me?
Dr ████████: You aren't in any position to be making requests.
D-17549: I would very much like to see things the way the ████████ down there do. Just tell those men with the guns to put a bullet in me.
D-17549 starts bashing his head against the desk. Dr ████████ backs away from the table. D-17549 tackles him and is shot by security.