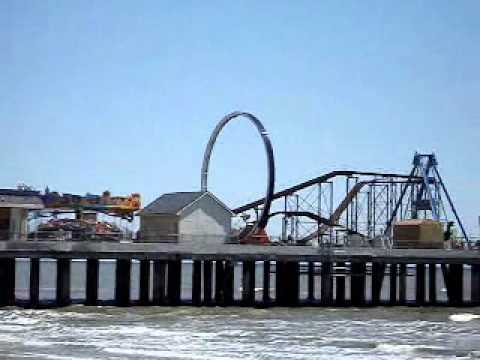 File photo of facility housing SCP-869, taken prior to containment

The facility housing SCP-869 is to be owned and operated by Supertastic Carnival Promotions, a Foundation front company, and is to remain in operation and open to the public for its intended purpose. A secondary service bridge is to be built to replace SCP-869. SCP-869 is to remain closed to park staff and the public. Both ends of SCP-869 are to be monitored by Foundation personnel operating as park security officers for the purpose of preventing unauthorized access.

All surveys of SCP-869 and the area beyond are to be conducted by Level 1 personnel operating in groups of three or more. Survey personnel are to be dressed in clothing appropriate to late 1940s mainstream American fashion and are to carry no more than ten dollars in pre-1948 US currency, as well as period-appropriate identification badges identifying them as local police, FBI agents, or Foundation personnel as necessary to facilitate interaction with park officials. Personnel conducting surveys are not to carry any equipment, technology, or personal effects that were not available to the Foundation in 1948. Personnel are to exit SCP-869 no later than 8 P.M., one hour prior to the park's scheduled closing time.

SCP-869 is a service bridge attached to the █████████ Historic Pleasure Pier, an amusement park located on a pier extending out over the ocean in the US state of [REDACTED]. SCP-869 was built in 20██ concurrent to the construction of the park itself, a recreation of an earlier pleasure pier which existed on the same site from 194█ until it was severely damaged by Hurricane [REDACTED] in 19██ and subsequently demolished.

SCP-869's anomalous properties manifest whenever the park is open for business and none of the park's attractions have been closed due to inclement weather. When these conditions are met, approximately ██% of persons crossing SCP-869 from the landward side to the pier, on foot or in a vehicle, will not arrive at the pier and will lose visual contact with land and pier-based observers at approximately the halfway point between the bridge's termini. The area that persons so afflicted arrive at, based on forensic analysis of photographs taken by survey teams, is physically identical to the original pleasure pier constructed on the site as it existed in the summer of 1948. 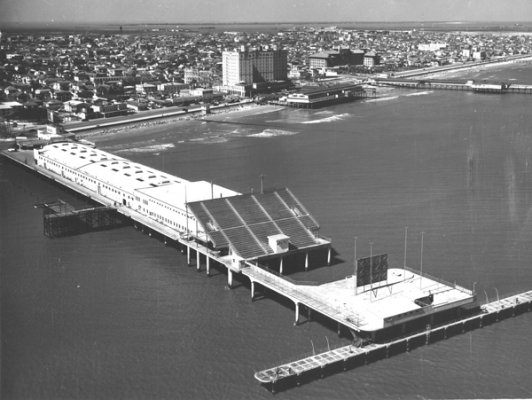 File photo of the original pier in mid-1948

No means of direct communication across SCP-869 has been discovered to date. Radio, cellular phone, satellite, and other wireless transmissions have proven non-functional, and attempts at laying a telephone line across SCP-869 and into the anomaly have consistently resulted in the cable-laying team failing to enter the anomaly.

In all cases where it has been attempted, crossing back to shore along SCP-869 from the anomaly, prior to the close of business for the day (which on 7/24/48 occurred at 9 P.M.) has returned survey team members to the shore successfully. Survey team members exiting the pier within the anomaly by its main entrance have found that the [REDACTED] mainland similarly is identical in all discernible ways to the state that it existed in in 1948. In all cases where persons originating within the anomaly have been persuaded to cross SCP-869 to the mainland, that individual has not arrived on shore. All personnel remaining within the anomaly after the close of business have been lost. No indication of the presence or ultimate disposition of persons missing within the anomaly has been found on any subsequent survey.

SCP-869 came to the Foundation's attention shortly after the opening of the █████████ Historic Pleasure Pier in 20██, and the subsequent disappearance of several park employees while crossing from land to the pier. To date, fifteen individuals are known to have become lost within SCP-869, comprising eleven civilians and four Foundation personnel. Refer to Document 869-332-B for a full accounting of surveying actions and dossiers on missing persons.

Addendum 869-1, 7/30/1948 On Monday, July 26th, an individual identifying himself as Dr. █████ ███████ presented himself at Site 11, bearing an otherwise apparently valid identification badge that does not match any individual currently employed by the Foundation, claiming to be a Foundation researcher from ██/██ of the year 20██. During debriefing, ███████ claimed that he had become stuck in the present day while investigating an SCP object that does not yet exist at this time, and had reported to the nearest Foundation facility in accordance with protocol. To corroborate his claims, he demonstrated knowledge of a wide variety of Foundation protocols, security procedures, and objects currently in containment. ███████ additionally made several claims regarding world events to occur later in the 20th century and SCP objects not currently known to the Foundation or not currently in Foundation custody. Dr. ███████ was particularly insistent that the Foundation should terminate an eight-year-old boy residing in Dallas who he claimed would assassinate a future president of the United States, and that under no circumstances should a man named "Thomas Wertham" be recruited by the Foundation as a researcher. Dr. ███████ additionally provided an SCP document, represented above, which he stated was the containment file for the anomaly responsible for his arriving in this era.

Based on Dr. ███████'s demonstrated knowledge of Foundation procedures, his behavior during enhanced debriefing, and the nature of several other anomalous artifacts found on and in his person, his claims are presumed to be genuine at this time. The Foundation is currently canvassing the █████████ area for any indication of the presence of the other missing persons referred to in the above containment document. Dr. ███████ has been treated with Class-B and Class-C amnestics and transferred to Site 73 for long-term observation pending determination of how to address the issue of other persons temporally displaced as a result of SCP-869.

Revised Special Containment Procedures, 8/23/1948: All persons identified as having arrived in the present era as a result of SCP-869 are to be taken into Foundation custody as soon as possible. Subjects are to be debriefed and released into the civilian population after undergoing amnestic therapy. Fingerprint records from temporally displaced persons are to be preserved for the purpose of testing to confirm the identity of persons reported missing within SCP-869 after its construction.

The names of temporally displaced persons are to be permanently expunged from the record. All foreknowledge of events yet to occur acquired from debriefing is to be made accessible to Level 5 personnel only and is to be referred to only for the purposes of verifying that subjects are genuine victims of temporal displacement. The Foundation is to take no action, directly or indirectly, based on foreknowledge acquired from persons temporally displaced by SCP-869, either to prevent or to encourage the occurrence of events described therein.

SCP-869's containment document is not to be filed in the central database. Upon the construction of SCP-869 in 20██, research personnel are not to be informed of the existence of this document. After SCP-869's containment file is approved and filed in the central database, it is to be checked against the document above after each revision to determine when and if the filed document matches the content of the document above.

Addendum 869-23, 5/30/2012 On 5/28/2012, Dr. Jacob Andrews failed to return from a survey of SCP-869 by 9 P.M. and was not subsequently seen or heard from. As of that date, the copy of SCP-869's containment document filed in the central database was a word-for-word match for the SCP-869 containment document recovered by the Foundation in 1948. Comparison of Dr. Andrews' fingerprints against those archived following the initial recovery of the SCP-869 document in 1948 suggest a high probability that Dr. Andrews is the unnamed doctor who provided that documentation to the Foundation. Subject 869-1, as he is referred to in later documents, remained in Foundation custody at Site 73 until he died in 1967 when SCP-███ breached containment.

Notes were found in Dr. Andrews' office after his disappearance in which he stated that, during his research, he had come to the conclusion that SCP-869 represented a means of time travel from this era to one specific date in the past, and that he had decided to conduct an experiment to determine whether it was possible to use his knowledge of events yet to occur as of 1948 to alter the course of history. It can be assumed that his statements to the Foundation in 1948 regarding Lee Harvey Oswald and former Site Director Wertham comprised his attempt to make those changes to the course of history.

Effective immediately, no personnel conducting surveys within SCP-869 are to leave the pier by any means other than SCP-869 itself. Any proposals for experiments to alter the course of history, or pass foreknowledge of post-1948 events to individuals within the anomaly, are preemptively denied. Survey personnel are authorized to use lethal force to prevent attempts to violate this directive.

It is impossible to determine to what extent Dr. Andrews and other persons lost within SCP-869 have affected the course of history from what it may have been prior to their becoming temporally displaced, or whether any of those persons may still be alive. The Foundation has identified twenty-one people as having been displaced to 1948 as the result of SCP-869; given that only fifteen people are mentioned in the original document, and only sixteen are known to have gone missing including Dr. Andrews himself, it can be presumed that at least five more persons will be temporally displaced by SCP-869 in the future. Coroner reports from 1948 indicate that two adult males who had been killed by gunshot washed up on the shore near █████████ in late July 1948. Bullets found within the remains were consistent with standard rounds used in sidearms issued to Foundation survey teams operating within SCP-869; due to the extent to which the bodies had decayed at the time of discovery, and the incompleteness of the medical examiner's reports, it is impossible to determine whether those bodies represent victims of unrelated violence or persons yet to be lost within SCP-869.