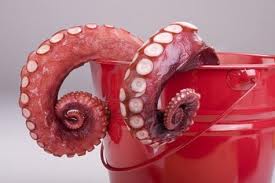 SCP-864 is to be held in a standard containment chamber, located in Site-77's Euclid SCP wing. This chamber is to be kept devoid of any moisture, and inspected once a day to check the seal. During testing, no personnel are to enter the testing area. In the event that articles of clothing manifest, they are to be stored as non-anomalous artifacts.

SCP-864 is a 20 cm tall washbasin with a 10 cm radius, composed of red metal commonly found in washbasins. The words "Made in China" and "Cherry Imperial Goff Applications" are imprinted on the bottom with black ink. No company of that name is found anywhere in China.

Instances of SCP-864-1 known to have manifested include:

Testing has shown that SCP-864 extends a distance of 2 kilometers when manifesting an instance of SCP-864-1, after which it terminates in a steel hatch with the words "Black Dragon Co." embossed in it. Robotic drones sent inside of SCP-864 have found that, while active, the interior is composed entirely of SCP-864-1 instances handling various garments. As of 1/16/2013, approximately 11% of these have been identified as originating from Earth. Of those, only 32 appear to originate from after 1900.