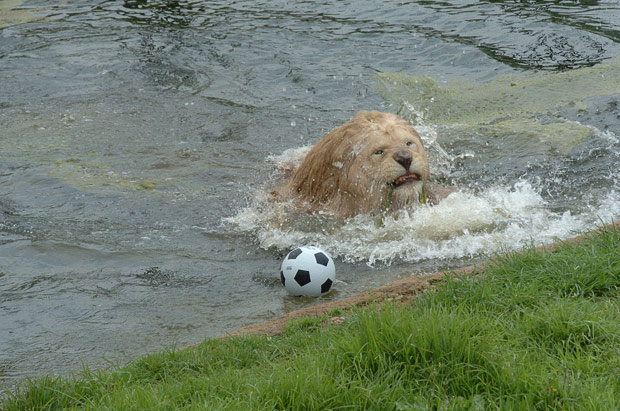 A ball is used to provoke SCP-856 to appear.

The affected length of the █████████ River is bounded with four kilometers of chain link fencing, three meters in height and topped with razor-wire. The fence lines both banks and connects across the river at both ends of the containment area. Signs are posted every fifty meters in Arabic and English, warning of a chemical spill contaminating the river. Two armed guards are sent twice daily to patrol both banks of the containment area in a standard Foundation off-road vehicle. The vehicle is equipped with a .50 caliber rear-mounted machine gun for use in the event of a containment breach.

Should a civilian(s) accidentally come into contact with SCP-856, they are to be treated with a Class-B Amnestic (if still alive) and transported immediately to the hospital in Rumbek. Medical staff are to be told the victim suffered from an unknown animal attack. The use of force is acceptable if a civilian(s) deliberately attempts to come into contact with SCP-856.

SCP-856 is an entity residing in a four kilometer length of the █████████ River in southern Sudan. If a human being comes into contact with the water, SCP-856 appears virtually instantaneously and attempts to attack them.

SCP-856 appears to be leonine in nature. Estimations put the entity at approximately the size of an adult male lion (Panthera leo). SCP-856 seems by all evidence to be bound to the river, as it has rarely been witnessed extending itself out of the water or beyond the banks by more than 1.5 meters (Note: see Incident Log).

Attacks come variably upon bodily contact with the river. In the majority of cases, SCP-856 appears within several seconds. However, in certain instances, the entity has appeared to time its attacks for maximum efficiency. If multiple parties come into contact with the water, SCP-856 will jump between individuals in fractions of a second, entirely regardless of distance. The entity’s ability of instantaneous movement does not apply to water up- or down-river of the containment area, or water physically detached from the confines of the river itself. Despite the abnormal capacity for movement exhibited by SCP-856, its attacks are of normal velocity and can be avoided with sufficient alertness.

Factors that incite attacks appear to be variable. No amount of protective clothing appears to prevent SCP-856 from sensing the contact of humans with the river. Objects placed in contact with the water by human beings have likewise provoked attacks, save for certain instances conducted with extreme care. Fauna in contact with the river generally do not incite attacks from SCP-856.

SCP-856 causes deep incisions and lacerations consistent with leonine teeth and claws. Wounds are fatal in 50-60% of cases, and generally come to the throat, face, or upper torso.

SCP-856 by all accounts ceases to exist when not attacking. Extensive photography, satellite surveillance, and sonar sounding have failed to observe the presence of SCP-856 in the absence of a provoking party.

Foundation control over SCP-856 and the four kilometer section of the █████████ River was minimal between the discovery of the site in 1956 and the Sudanese ceasefire of 1995. At that point, greater numbers of personnel could safely enter the area and current containment procedures were put into effect.

Prior to 1995, a small village of several hundred people, called ███, was situated on the eastern bank of the █████████ River within the region containing SCP-856. The inhabitants of the village were inexplicably able to draw water from and wash in the river without inciting attacks. Interviews revealed that the villagers believed the entity was a protective spirit, and ritualistically left it offerings of livestock. In 1995, a joint effort between Foundation forces and UN peacekeeping troops re-situated the village 9 km downriver with a minimal loss of civilian life.

Incident 856-A
Date: ██/██/1956
Events: A troop of twenty-one Anya-Nya guerrillas attempted to ford the river from the west bank, apparently with intent to attack ███ Village. Eyewitnesses claim that when the party was approximately halfway across the river, SCP-856 sprang upon them from down-stream. Three of the soldiers were killed and several more were injured within thirty seconds. Wounds inflicted on SCP-856 by gunfire appeared to harm it without consequence ("It bled but never stopped"). The remaining men fled from the area.
Notes: Reports of this incident led to the first investigation of SCP-856 by the Foundation, and the establishment of rudimentary containment procedures.

Incident 856-B
Date: ██/██/1971
Events: A surveying motorboat drifted within the section of the river containing SCP-856, resulting in the deaths of two junior researchers. The first was killed by a laceration to the throat, and the second expired later due to blood-loss from a severed limb. The researchers were members of a three-week task force sent to gain further information on SCP-856 through observation and experimentation.
Notes: Following this incident, extant containment procedures for SCP-856 were intensified.

Incident 856-E
Date: ██/██/1995
Events: A team of five engineers were attacked while attempting to lay a temporary bridge over the section of river containing SCP-856. One suffered fatal injuries.
Notes: Security footage confirms that at no time did any personnel or bridge component come into contact with the water. It appears that under certain circumstances, SCP-856 is able to leave the confines of the river.

Incident 856-F
Date: ██/██/2009
Events: Due to a particularly bad drought, a section of the █████████ River, including the containment area for SCP-856, dried up for a period of 42 hours. At 08:30 in the nearby city of [DATA EXPUNGED]. All three entities were finally pushed back by Foundation forces at 13:50. Total deaths numbered 22 civilian, 9 local law enforcement, 1 Foundation personnel.
Notes: This incident has called into question Foundation understanding of the exact composition of SCP-856. It has been ascertained from this incident that with significant firepower, SCP-856 can be restrained for a short period of time. Requests have been filed for measures to prevent further incidents of this type.