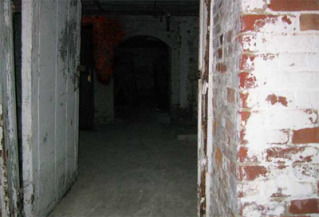 SCP-844 is currently contained at Site ██. SCP-844 is to be contained in a well-lit chamber measuring 6m x 6m and provided with one (1) bovine each month in accordance with Nutrition Chart 844-1. Each month, SCP-844 is to be reduced in size by two (2) D-class personnel using shears.

Any personnel entering SCP-844's containment chamber must wear a protective suit in order to prevent injury or death.

SCP-844 is an amorphic mass composed primarily of human bones, large amounts of dust and a form of luminescent fungus which is red in color. SCP-844 appears to prefer to dwell in dark, warm areas with minimal human presence when it is not hunting or feeding.

SCP-844 is predatory and highly mobile, having demonstrated the ability to hide from assailants by moving across walls and ceilings. It has a particular method of hunting involving lure tactics, which it has abstained from using since arriving in Foundation custody, although on arrival it did attempt to use provided bovine to lure researchers nearby.

When hunting, SCP-844 will firstly attempt to lure a human target, usually between the ages of six to twelve, into a fairly secluded area. SCP-844 accomplishes this by leaving a trail of red, viscous liquid when hunting, which quickly coagulates into a semi-solid edible mass. The area the victim is lured to is usually an easily accessible location that experiences minimal traffic.

Once there, SCP-844 will settle itself into a poorly-lit area and using a number of hooked barbs stored within its main mass, secure the victim into place.

SCP-844 will then use a variety of physical methods to incite the victim into vocalizing distress. This is primarily realized through the use of the sharpened bones that make up a section of its mass. During this process, SCP-844 takes great care to ensure that the wounds inflicted are non-fatal, so that this victim can be re-used for further hunting.

Typically, an individual will approach and investigate the vocalizations, at which point SCP-844 will attack. This attack is usually swift and painless, as SCP-844 aims for the neck and head of the victim at this time. SCP-844 will then extract and absorb the bones of the victims into itself.

During its containment, SCP-844 has been observed to rest on the ceiling of its cell, attempt to damage lights illuminating its containment chamber and to sharpen bones incorporated into itself on the chambers walls.