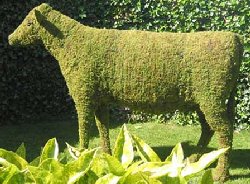 All 3 contained instances of SCP-843-1 are to be stored in their original packaging, within an airtight container. Should any unusual sounds be heard from within the container, D-class personnel armed with flamethrowers are to enter and cleanse the area. SCP-843-2 is to remain in an enclosed pen, with D-Class personnel entering every 12 hours to supply grain and water. Any instance of SCP-843-1 or SCP-843-2 in the wild are to be reported and destroyed.

SCP-843-1 appears to be a seed of Phaseolus lunatus (lima bean), painted white with black spots to resemble a typical Holstein cattle's coat. The original packaging for SCP-843-1 contained 5 of these seeds, as well as a piece of paper proclaiming the items within to be 'Cow Seeds'. SCP-843-1 is itself harmless, though when planted within 5 days SCP-843-2 will manifest.

SCP-843-2 is a creature similar to a typical Holstein cattle, save that it is composed entirely of an unknown plant matter. At first, SCP-843-2 is much like a young calf and is rooted to the soil it sprouted from. However, at anywhere between 5 and 10 days the calf will uproot itself and begin to grow at █ times the rate of a normal calf. After uprooting, SCP-843-2 will grow increasingly aggressive. As there is only one instance of SCP-843-2 in containment, it is not currently known how or even if SCP-843-2 reproduces, or how SCP-843-1 is formed. It is currently theorized that [DATA EXPUNGED].

SCP-843 was purchased on ██-██-████ by Agent █████ in a rural town in ███████████. Two seeds were planted in her garden and soon sprouted, showcasing SCP-843-2. █████ reported and was able to contain one instance of SCP-843-2; however, the second escaped into rural ███████████.

Addendum: Agent █████ reported that the store she purchased the item from apparently had 'a couple of displays full of the things' and many people were interested in them. A recovery team was sent to the location █████ provided, but found that the store had been the victim of a faulty electric system and had burnt to the ground. All records of transactions have proven to be inaccessible (as the store was cash only and had no computer based record of transactions). As such, Mobile Task Force Upsilon-2 ("Cattlewranglers") has been established, searching for and containing more instances of SCP-843-2.