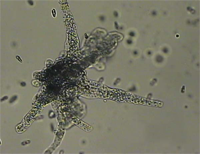 An isolated sample of SCP-840

Due to SCP-840’s presence in ecosystems across the globe, SCP-840 cannot be fully contained. Outbreaks and potential outbreaks of SCP-840 are to be reported to either Dr. ████ or biological research overseers for immediate containment.

Three samples of SCP-840 are kept in Bio-Research Area-12 for study. Samples are to be habituated within segments of PCB piping, 30 mm (1.2 inches) in diameter and 300 mm (11.81 inches) in length, and provided with a constant flow of water containing biological material to ‘digest’ three times a week. Samples must not be allowed to grow beyond the length of the pipe, and screening of bio-site drainage systems for containment breaches is to be conducted every six months.

SCP-840 is a type of amoeba that thrives in dark, damp environments, which given the correct circumstances will form a unique symbiotic relationship, ‘fusing’ together by secreting an extremely viscous mucus. These fused colonies are capable of replicating many of the functions of animal tissues, particularly that of vital organs. Although SCP-840 has a prolific growth and reproduction rate, colonies are capable of existing unnoticed for years.

Pipes and drainage systems are the preferred habitat of SCP-840. To date, there has only been one observed instance of SCP-840 colonising a natural environment (see incident report I-840A-1). Using the exterior of the pipe as an exoskeleton SCP-840 will, over time, convert these systems into an extended digestive system, capable of extracting nutrients and moisture from passing biological matter. Material is transported by means of a constant or frequent flow of water aided by peristalsis, and is broken down through the excretion of a highly acidic mucus.

In larger drainage spaces, such as places where piping has burst (either incidentally or as a result of a build-up of SCP-840), colonies are capable of organising into more complex structures, resembling ‘organs’, ‘chambers’ and ‘sphincters’. Sphincters serve to restrict the flow of fluids and solids, often causing a build-up of matter so as to increase the surface contact with SCP-840. Chambers typically grow in larger cavities, and aid in the digestion process by secreting a highly acidic mucus, or by serving as a storage area for resistant or indigestible materials. The largest chamber on record had redirected a major sewer system in █████████████, United States, and had occupied [REDACTED]. Indigestible material will often remain in these chambers indefinitely, until it is either pushed further along the ‘tract’, or forced through the walls of the chamber itself. Chambers may also take on characteristics similar to a bird's gizzard, storing indigestible materials such as stones for the purpose of crushing difficult materials. In an examination of the contents of one such chamber, the following was found: 2 rings, $28.20 in coins, several goldfish skeletons (number inconclusive), several rat skeletons (number inconclusive), 1 pair of glasses, 19 condoms, 1 key, 3 dolls, 1 turtle shell, 1 pair of false teeth and 0.76 kg of human hair. 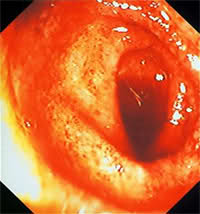 Image of the interior of a SCP-840 colony, taken via snake-cam

In rare cases, SCP-840 has been observed to organise into other ‘tissues’ and even more complex structures. Some of these have been known to displace dirt, stone, concrete and even metal by a combination of acids and physical pressure. Excavated material is digested and transported away through the system, enabling SCP-840 to extend beyond its ‘exoskeleton’ and establish new tracts. There have been rare instances of these branches reconnecting with other parts of the same tract, creating a circuitous system. Other structures have been known to form complex pump and valve systems, circulating digestible material through rhythmic contractions similar to a heart.

In most cases, any material that is ultimately not digested is forced out of the system wherever the tract ends, or through the tract walls, and often the natural flow of water will direct this material into normal sewage systems. However, in more established colonies (particularly those containing pump and valve systems), the flow has been known to redirect to other outlets, contaminating natural bodies of water, storm drains and fresh water piping. Where material is not able to be ejected or disposed of, especially where large items unsuitable for being disposed of via sewerage, the system may become blocked. Several recorded incidents show that in these circumstances SCP-840 will induce emesis (vomiting), through a series of large contractions and the relaxation of sphincters.

SCP-840 was first observed on ██/██/████, in ██████████████████, ████████, United States, when a resident suffered second degree burns while attempting to recover a lost ring from the bathroom sink by hand, presumably from contact with digestive acids, and the house was subsequently placed under investigation. After several meters of piping were removed, tearing part of the tract in the process, it was established that the colony was present in almost every drainage and pipe system in the house, after which the house was declared a biohazardous area by local authorities. While an operation to remove the house's piping was underway, a second incident occurred in a house on a neighbouring block where a resident, for reasons unknown, had been using their toilet to dispose of large volumes of plastic, ultimately causing a blockage in one of the chambers. As a result the SCP-840 colony was induced to eject the partially digested material not only removed from the second residence, but also from neighbouring buildings, flooding several homes. The Foundation was alerted to the outbreak of a potential SCP, and soon after established the growth having covered [REDACTED]. A media blackout was enacted shortly after.

Incident report I-840A-1:
Date: ██/██/████
The first known instance of SCP-840 colonising a natural environment was observed in ██████████, Australia. The colony was discovered by a group of four cavers, investigating an unexplored section of █████████ Caves in ████████. In an interview the cavers stated that the colony was discovered as one member of the group attempted to crawl through a narrow passageway, approximately 150 meters (500 ft) from the cave entrance, while the rest of the group stayed behind, attaching a lifeline as a precaution. After having crawled for roughly 3 meters (10 ft), the caver reported feeling a sticky growth on the cave walls, but dismissed it as moss and continued forward. The group became concerned when the caver reported feeling rhythmic contractions following along the cave walls, and alarmed when they claimed to be being ‘pulled’ by the contractions shortly after, after which they were forcefully extracted via the lifeline. The extracted caver had suffered multiple mild to moderate burns to much of their body, and was treated by Foundation medical staff. Several bones were extricated with the caver, believed to have originated from a nearby fruit bat colony.

Addendum: Due to the extent of the colony reported in incident I-840A-1, the area has been declared a civilian restriction zone until the colony has been completely eradicated, designated Bio-Site ███.