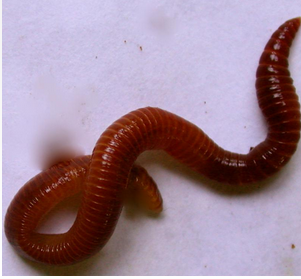 SCP-839 appears to be a species of annelid composed of sugar, flavouring and colouring. A microscopic label stating "CANDIED WORM" is found near each instance's posterior, followed by a smaller label stating the instance's "flavour". Each "flavour" is currently designated as SCP-839-x.

SCP-839 is generally found in temperate areas. SCP-839's diet mainly consists of decomposing organic matter, however when there is no decaying matter apparent SCP-839 may ingest live plant matter. SCP-839 sexually reproduces. Mating [REDACTED], followed by the egg hatching into a newborn instance of SCP-839.

When SCP-839 is ingested by any mammal, it will burrow through the stomach lining and towards a specialized organ. The choice of organ appears to be dependent on SCP-839's "flavour". SCP-839 will then attach itself to the organ and slowly ingest it. While the organ disappears, SCP-839 will change in form and chemical composition in order to match the organ. SCP-839 does not act as a perfect replacement, and other effects may occur. This process may take █ to ██ days to complete.1

SCP-839 has an average lifespan of three years. Users of SCP-839 are recommended to replace their integrated instance with a new instance every two years.

Footnotes
1. Similarities between the life cycles of SCP-839 and SCP-1517 has been noted. Investigation into the possibility of a shared origin is under investigation.
SCP-838 SCP-840