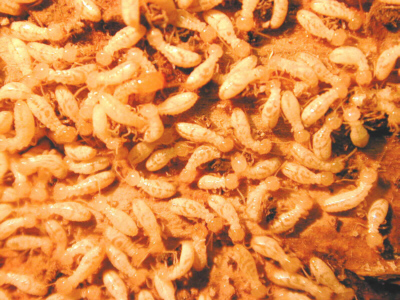 Colony of SCP-831, collected in home in Radnor, Pennsylvania

Colonies of SCP-831 are to be contained in an observation chamber with ceiling, walls and floor having Vickers hardness of at least 1000 kg/mm sq. The containment chamber is to be regularly inspected; any damage - even a scratch on the floor - is to be reported in accordance with Procedure 831-C. Nutrients introduced into chamber are to be poured on the floor and not contained in any kind of vessel. Personnel entering chamber for any reason are to be equipped with Class-T armor, and subject to thorough inspection before and after entry to ensure that no foreign objects are introduced into the chamber nor are any specimens of SCP-831 inadvertently removed from the chamber.

Populations of colonies of SCP-831 in containment are not to exceed the limits prescribed in Document 831-2155AE. Nutrients are to be withheld and specimens are to be destroyed as necessary to keep colony populations within these limits.

Colonies of SCP-831 encountered outside of Foundation containment are to be immediately eradicated. Individual organisms of SCP-831 can easily be exterminated by fire, crushing, asphyxiation or many other methods. However, sufficiently advanced colonies of SCP-831 can be expected to have constructed defense mechanisms. After eradication, objects found in colony’s location are to be brought to Site-36 or Site-181 for analysis.

SCP-831 is a species of tool-using insect-like organisms superficially resembling wingless worker-caste Reticulitermes flavipes. Colonies of SCP-831 have been collected or eradicated in eleven locations in eastern and central North America to date, in locations ranging from Texas to Ontario. The organisms appear to be capable of feeding on most organic material, with a preference for cellulose and sugars. Mature specimens range from 7 mm to 1.2 cm in length. Individual specimens appear to have a lifespan of 25 to 40 days. Unlike true termites, SCP-831 does not appear to be divided into castes with distinct morphology; all specimens are essentially “workers” and all females are capable of breeding with an extremely short gestation period.

SCP-831 is a highly social organism and is found in colonies. The upper bound of the colony size is not yet known; the largest colony investigated by the Foundation to date consisted of at least eight million individual organisms. Individual organisms of SCP-831 do not exhibit intelligence beyond simple survival instincts.

The colonies of SCP-831 that have been identified to date were located in (or originated in) dark, enclosed urban locations affording shelter, access to nourishment, water and materials appropriate for the construction of SCP-831's tools. In most cases, the colony was discovered in the basement, attic or walls of a home or other structure. If a colony is located within a structure, the colony will not consume the wood cellulose to an extent that would compromise the structure’s appearance or structural integrity. The organisms flee from light and their behavior suggests an instinct to avoid detection or observation by humans or predators.