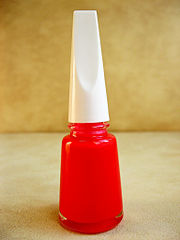 Note: SCP-829 appears to be equally effective on both males and females. For clarity, this document will assume that the subject of SCP-829 is female.

SCP-829 is a volume of nail polish, typically 3 to 10 cc in size, composed primarily of ██████ █████████ brand nail polish, but also variable amounts of water, human blood (from multiple individuals), and small amounts of a large number of organic compounds (for a complete list of compounds detected in SCP-829, see Document 829-CM). SCP-829 is able to generate more of itself by absorbing water vapor from surrounding air, and by “drinking” human blood dripped into its bottle. If neither water vapor nor blood is available, SCP-829 becomes dormant, and does not appear to exhibit negative effects from extended dormancy. To date, researchers do not know how SCP-829 can utilize so much water and still maintain its properties as a nail polish.

When applied to a human subject’s fingernails, SCP-829 affects the subject in several different ways, depending on how much blood SCP-829 has received recently:

Once SCP-829 has received sufficient blood from enough different targets, the subject will introduce SCP-829 to her current sexual partner and attempt to apply SCP-829 to the target’s fingernails. Willing targets become affected by SCP-829 just as the original subject; unwilling targets [DATA EXPUNGED]. Both subjects will together continue the flirtation-to-evisceration cycle, seducing some targets individually and others together. As progressively more blood is given to SCP-829, the subjects will periodically recruit more targets as new subjects for SCP-829. However, if SCP-829 is not fed enough blood, then one subject (usually the newest recruit) will become a standard target, whom the remaining subject(s) will then restrain and disembowel.