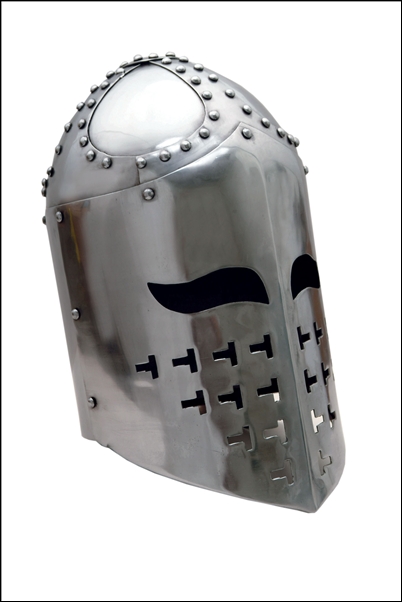 At least two Foundation members must be present for any interaction with SCP-825. One member must be designated Monitor and remain at least 2 m from SCP-825 at all times. If accidental application occurs, the Monitor should notify the security team. The Monitor must not attempt removal of SCP-825 without supervision.

It is recommended that test subjects should not have SCP-825 applied for more than 180 minutes. Any experiment involving longer application must have security team present for removal, as test subject may behave unpredictably.

SCP-825 is a standard-sized helmet of medieval design. The degree of wear is consistent with this dating, provided SCP-825 has been well cared for. This is entirely probable, as it was liberated from [DATA EXPUNGED] despite frequent use [DATA EXPUNGED] how long the group had been in possession of SCP-825, as the only surviving members were not present when [DATA EXPUNGED] and has itself been designated SCP-███. Efforts are still in place to track down anyone else involved in the incident.

SCP-825 has the property of inducing visions in any who wear it. Testing indicates that SCP-825 does not need to be worn on the head, but that insertion of any part of the body within the volume enclosed by the helmet will count as application. Upon application, the subject will be unable to move any part of their body below the neck until SCP-825 is removed. During application, the subject will be unable to see, feel, or otherwise sense their surroundings, with the exception of sounds which the subject will hear as muted and distant. The subject will also experience highly convincing visual, auditory, olfactory, gustatory, tactile, and nociceptive hallucinations. The form and nature of the hallucination varies depending on subject. The only common element is the disturbing and unpleasant nature of the hallucinations, focusing on the subject's phobias and neuroses.

Addendum A The subject is invariably highly motivated to be removed from SCP-825, and will go to great lengths to avoid repeat application. When SCP-825 is removed, the subject remains physically unharmed, although — depending on the duration and nature of the exposure — may suffer from PTSD or mental breakdown. Frequent prolonged exposure results in total mental breakdown and insanity.

Experimental Log: Please include subject ID and any pertinent biographical or psychological information as well as test results. All tests are of a duration of 30 minutes unless otherwise stated.

Date: ██-██-20██
Subject: D14729
Info: First test subject
Results: Subject reported an initial period of blackness before vision returned. Subject responded to questions, but complained that it was difficult to hear. After 10 seconds, subject began screaming and demanded to be released. When questioned, his only response was, "They're cutting me, they're cutting me, get me out." When informed that he would remain until the question was answered, subject hurriedly described the hooded figures who were slowly dismembering him. Further detail of the vision was provided after the experiment.
Additional Comments: The effect of SCP-825 is much as expected from reports provided by [DATA EXPUNGED] though this currently remains a theory.

Date: ██-██-20██
Subject: D14783
Info: Profile indicates subject had a near-death experience after falling into a frozen lake as a child.
Results: Subject described being trapped in a small room slowly filling up with water. After 10 minutes, subject became unresponsive to questioning. Technicians discussed removing SCP-825 when subject resumed speaking, describing the room now filling with icy cold water. Process was repeated with foul and polluted water. Each time subject grew more agitated. Process repeated with blood and then liquid excrement. After 317 minutes subject no longer responded to questioning. SCP-825 was removed. Subject remained unresponsive, and was terminated after 7-day observation period.
Additional Comments: The escalating pattern is clear, as is the focus on the subject's personal phobias.

Date: ██-██-20██
Subject: D14791
Info: Profile indicates subject suffers from arachnophobia.
Results: Unexpectedly, subject experienced a vision of being sexually assaulted by several former cellmates. Subsequent investigation revealed that such an attack occurred during a previous incarceration. SCP-825 was removed for 10 minutes and then the subject was informed that it would be reapplied. Subject answered intimate questions and followed demeaning instructions in a frantic attempt to prevent reapplication. Reapplication resulted in a similar vision, except all participants were now covered in spiders. After removal, subject damaged restraints in his attempt to escape and was sedated.
Additional Comments: Containment facility outfitted with stronger restraints.

Date: ██-██-20██
Subject: Technician ████ and Security Personnel ██████
Info: Accidental application.
Results: The circumstances of application are unknown, but both subject were discovered holding SCP-825 with their fingers just inside the rim. Their positions suggest that ████ was first to be exposed, and that ██████ was exposed in the attempt to remove SCP-825 from him. It is estimated that subjects were exposed for 9 hours before discovery. Both were unresponsive.
Additional Comments: Containment procedures updated to prevent a similar incident occurring: in subsequent experimentation, SCP-825 will be applied to some other appendage rather than the head, so that facial expressions of subjects may also be monitored.

Date: ██-██-20██
Subject: D14827
Info: Subject sentenced for 4 counts of homicide, the earliest being his father who it is suspected was abusive. Subject has two younger sisters of whom he is fiercely protective. (See history of violent incidents with other inmates, resulting from insults against his family.)
Results: It was predicted that the subject would likely relive an incident of abuse against himself or his family by his deceased father, whom the subject greatly feared. While this was broadly the case, the subject found himself in the position of the attacker, unwillingly committing a series of increasingly violent physical and sexual attacks against his mother and two sisters.
Additional Comments: Subject was discovered in his cell the next morning, having committed suicide. While SCP-825 does not directly cause physical harm, clearly the mental effects can result in indirect harm. Care must be taken in the post-processing of subjects, particularly those of continuing value.

Date: ██-██-20██
Subject: D14833
Info: Profile indicates subject suffers from musophobia, and possesses low levels of intelligence and imagination.
Results: As expected, the subject reported perceiving confinement in a room with several rodents. When asked if he was being bitten, the subject responded "No… wait, now they are." Further suggestions as to how the vision could be worse (e.g., larger rats, being restrained, being confined in a tiny box filled with rats, the rats specifically attacking subject's eyes and genitals) were all subsequently introduced into the subject's vision after a short delay.
Additional Comments: While it may be possible for the sequence to be a natural progression similar to that experienced by other subjects, there is a significant correspondence in the timing of the suggestions to their inclusion. It seems that the visions are related to the subject's ability to conceive of the scenario. The escalation may be the natural consequence of the subject speculating on ways in which their situation could be worse. In the case of D14833, the subject was unimaginative enough that such speculation did not occur until prompted.

Date: ██-██-20██
Subject: D14856
Info: Subject was sedated prior to application. SCP-825 was removed before consciousness was regained.
Results: Subject reported disturbing nightmares, but did not seem as affected as previous subjects. Subject did not recognize SCP-825 and did not resist application. Subject reacted normally and displayed the usual reaction to SCP-825 afterward.
Additional Comments: It seems that the visions still occur during unconsciousness, but that the unconscious mind is less affected.

Date: ██-██-20██
Subject: D148-MSN03
Info: Subject is mentally subnormal.
Results: When questioned about his initial experience, subject responded that there were people "being mean" to him. Promptings and suggestions were able to affect the nature of the visions to a degree; however, subject was unable to comprehend anything but the simplest suggestions; thus, advanced scenarios did not manifest.
Additional Comments: This test seems to confirm the active role that the subject's own imagination plays in determining the nature of the visions, which are limited to that which the subject can conceive.

Date: ██-██-20██
Subject: D14873
Info: Profile indicates that subject suffers from ophidiophobia.
Results: Rather than a snake-related vision as predicted by the subject's profile, the subject instead found himself torturing a number of dogs in various ways. The subject was unable to explain why this should be the case. When threatened with further application, the subject confessed to an incident in his childhood. Biometrics together with inconsistencies in the story indicate that it was a fabrication created to avoid application. As an extension to the test, on return to the general population the subject was (falsely) informed that D14850 had committed acts of cruelty against dogs. (D14850 was a convicted serial killer, but no evidence suggests that he was guilty of animal abuse.) D14850 was later found beaten to death by subject, who was subsequently terminated.
Additional Comments: It seems that SCP-825 is capable of exploiting psychological vulnerabilities even the subject is not aware of. It is also clear that as an interrogation tool, SCP-825 suffers from the same risks of false confessions as all other advanced interrogation techniques.

Date: ██-██-20██
Subject: Laboratory rat (Rattus norvegicus, Wistar strain (female, age 7 months)
Info: the Wistar strain of rat is known for being more active than most other strains of laboratory rats.
Results: SCP-825 was turned upside-down, and test subject was placed within. Test subject immediately voided its bowels and bladder, then began distress vocalizations and biting motions. After 15 seconds, SCP-825 was turned right-side-up; upon retrieval, test subject immediately began biting research assistant G████████ through his glove, causing serious damage to G████████'s index finger before being flung across the room and dying on impact with the opposing wall.
Additional Comments: Further experiments with Wistar rats reveal that exposure to SCP-825 consistently leads to drastically heightened aggressiveness in survivors, with social grooming activities being reduced or eliminated; cannibalistic infanticide is ubiquitous. All test subjects have died of heart attack immediately upon second exposure to SCP-825.

Date: ██-██-20██
Subject: Earthworm (Lumbricus terrestris, (age 14 months)
Results: SCP-825 was turned upside-down, and test subject was placed within. After 15 seconds, SCP-825 was turned right-side-up; upon retrieval, subject manifested no discernible behavioral changes. Necropsy revealed no differences in brain structure between test subject and control subject.
Note: This is significant progress: we seem to have found a lower limit beyond which this SCP is ineffective. - Dr. ███