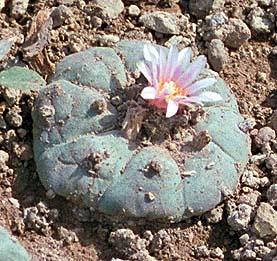 Wild specimen of SCP-822 prior to destruction.

Specimens of SCP-822 are contained in an isolation chamber at Biological Containment Site-103. Personnel may not approach within 5 meters of the chamber at any time; watering and soil conditioning are to be done via automated systems and any maintenance work must be done remotely with robotic assistance.

SCP-822 is a species of cactus similar in appearance to Lophophora williamsii (Peyote) but with significant differences as the plant reaches maturity within a period of approximately thirty (30) days. As SCP-822 nears maturity, a large gas sac forms within the center of the plant as it reaches its typical maximum dimensions of approximately 10cm in height and 25cm in diameter. This sac is filled with volatile gasses including ████████, ████, and several substances unique to SCP-822. At the same time, the skin of SCP-822 hardens until it reaches a point not unlike sheet metal and seeds begin to form just under the skin. Once the plant is fully mature, it flowers and begins extruding a pheromone that serves to attract mammals of sufficient mass to trigger its anomalous property.

Through an unknown mechanism, whenever any living creature of sufficient mass (approximately 10-20 kg) approaches within 3 meters of SCP-822, the central portion containing the gas sac violently detonates, causing shrapnel-like shards of SCP-822's skin to fly through the air. These fragments are capable of embedding themselves into the skin and flesh of any living creatures nearby, which carry the seeds of SCP-822 away. Living creatures struck by these fragments that do not die from physical trauma eventually succumb to a potent neurotoxin synthesized by the fragments within three (3) to six (6) hours.

SCP-822 was first discovered at a military proving ground near [REDACTED]. SCP-822 was reported to the Foundation after 3 personnel were killed when they drove a vehicle near a large patch of SCP-822 and a fourth managed to return to the base before expiring. Subsequent investigation of the infested area turned up hundreds of specimens of SCP-822 as well as the corpses of dozens of animals that had wandered into the area and been killed, some of which had SCP-822 growing directly from their bodies. After sample specimens were collected, the entire area was subjected to firebombing, incinerating all remaining SCP-822 in the area.

Date: █/██/██
Subject: D-9912
Procedure: Subject equipped with a military-grade bomb suit and instructed to approach SCP-822
Results:
SCP-822 detonates as Subject approaches within precisely 3 meters of specimen. Shock sensors record blast as equivalent to the detonation of a ████ ███ land mine. Subject suffers injuries consistent with being in close proximity to high-explosives detonation, such as ruptured eardrums.

Date: █/██/██
Subject: D-9989
Procedure: Subject is restrained completely as to prevent any movement, specimen of SCP-822 is moved towards Subject via robotic rover
Results:
SCP-822 specimen detonates when brought within 3 meters of Subject. Subject survives initial detonation but succumbs to neurotoxin.

Date: ██/█/██
Subject: D-9989 (Deceased)
Procedure: Specimen of SCP-822 moved towards dead body of Subject
Results:
SCP-822 does not detonate, even when placed directly on body of Subject.

"Apparently SCP-822 is capable of detecting living creatures within its trigger radius, despite not being able to "see" the target, detect its sounds, or feel any shifts in temperature. More experimentation needs to be done to determine how it does this." - Dr. █████████