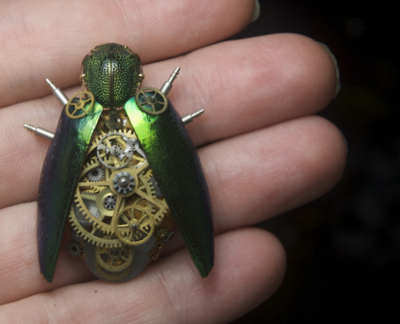 SCP-816 is currently contained to Provisionary Site-██ of its own volition. A containment breach is not considered likely, and any containment breach would likely end without intervention, as SCP-816 requires access to SCP-816-1 in order to survive, and is not capable of moving SCP-816-1. SCP-816-1 must be re-wound every 50 years to ensure continued dependence. In the event that SCP-816 becomes no longer dependent upon SCP-816-1, Contingency 816-C must be immediately enacted (see document SCP-816-█) Provisionary Site-██ [Site-P/██] has been established to contain and research SCP-816. Site-P/██ is a home in █████████, Switzerland, and SCP-816 is confined to its basement.

SCP-816 is the name given to the collection of small automata residing in the basement of the house at ██ █████████ Street, █████████, Switzerland. Journals found in the basement indicate that ███████ ████████, a local teacher, originally created SCP-816 in 189█. Inspired by the works of Charles Darwin and Charles Babbage, he designed and built automata capable of reproducing and evolving. The mechanics of reproduction are facilitated by a collection of parts common to all species; however, most species modify the base parts to create specialized parts to fit their ecological niche.

At the core of each SCP-816 is a rudimentary processor which varies little between species. While much less powerful than modern processors, they are still far beyond what should be possible for 1890s level technology. While, as far as research has determined, no aspect of SCP-816 violates known principles of science, they are still precisely designed to a degree which is not humanly possible.

SCP-816 receives new energy from SCP-816-1, a grandfather clock modified to provide mechanical energy to SCP-816. SCP-816-1 was designed for longevity; however, upon discovery SCP-816-1 had nearly exhausted its energy supply, and as such the SCP-816 research team has rewound SCP-816-1 to continue providing energy. The research team concluded that keeping SCP-816 dependent on a local energy source would aid containment, and that without SCP-816-1, SCP-816 would likely adapt to gain energy in a way that would allow it to expand beyond Site-P/██. The consequences of an expansion of SCP-816 beyond Site-P/██ are unknown, and could be, in a best-case scenario, harmless, to, in a worst-case scenario, an RK-Class Restructuring Scenario, where SCP-816 would out-compete biological life.

██ distinct species of SCP-816 have been observed, though many more likely exist. Based on journal records, all species are descended from a single original design. SCP-816 reproduction is similar to biological reproduction, with a few key exceptions: any individual can act as a “male” or “female”; during “intercourse” the designs for both partners are mixed, with infrequent “mutation”, and the data is transferred to the “female”, who then begins searching for parts to assemble the new design.

Predation occurs in two forms: The primary form is for the purpose of regaining energy; the second is reproductive in nature. In the first form, a specialized device has evolved for most species that interfaces with the slot that plugs into SCP-816-1 to obtain energy, thereby allowing SCP-816 to regain energy without directly taking it from SCP-816-1. The second form occurs after reproduction, wherein the "female" will search for and "kill" other automatons in order to procure parts to build its offspring.

The basic ecosystem that has evolved is as follows: the foundations of the ecosystem are two species of SCP-816: the "assimilators" and the "collectors". The assimilators are capable, unlike any other species, of creating new parts from their environment. This is the only way that new material enters the system, and an evolutionary shift in the parts that make up the assimilators can result in a population boom or extinction for other species. The assimilators are large (roughly ten (10) cm in length) and slow, making them the primary target for reproductive predation. The collectors are the species that now completely controls access to SCP-816-1, forcing most species to rely on predation for energy. The collectors have evolved various defenses to ensure control of SCP-816-1, but they are the prime targets of energy predation, and now effectively the sole way that new energy enters the system. The assimilators and collectors are roughly analogous to herbivores in the SCP-816 food chain.

Most species prey upon the assimilators and the collectors for energy and parts, each filling an ecological niche. One species uses the various specialized parts left over from reproductive predation in its design, frequently in ways they were not intended to be used. Another species has evolved defenses to reproductive predation in that it alters the base parts to such a degree that few species will target it, since it contains so few usable parts. Another species, however, has evolved specifically to prey upon the aforementioned species, evolving devices to reform the base parts into their original shapes.