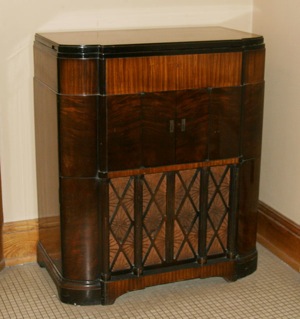 SCP-814 prior to containment

SCP-814-1 is to be kept in a sprung, evacuated anechoic chamber within the Quiet Area of a Type IV acoustic containment facility. SCP-814-2 is to be stored in a climate-controlled locker outside the facility's Quiet Area. As its mechanisms are very fragile, SCP-814-1 is not to be accessed under any circumstances without the authorization of its Senior Researcher or HMCL. In the event of a Site emergency, SCP-814 is to be remotely destroyed.

SCP-814-1 is an ornate mahogany enclosure housing an antique wax-cylinder type phonograph (c. 1900 CE) of unique design. The internal mechanism, which is completely functional, is capable of holding up to four music cylinders; notably, it is capable of the replay of multiple cylinders simultaneously. The manufacturer's mark "SYNCOPE" is etched on several of the phonograph's components.

SCP-814-2 is a set of four phonograph cylinders recovered from SCP-814-1's four cylinder slots. These cylinders are of approximately the same age as SCP-814-1, albeit made of hardened steel rather than wax. Each cylinder has the phrase "PURE TONE" engraved on each end, followed by a number indicating the frequency, in Hz, of a sine-wave tone produced by playing the cylinder.1 The cylinders' audio grooves are engraved with extreme precision; even under confocal microscopy, the grooves show no apparent deviation from the pattern required to produce a pure tone of precisely the given frequency.

When SCP-814-2 cylinders are played via SCP-814-1, the sine-wave tones produced are anomalously free of distortion. Even considering the nature of the cylinder grooves, such tones are exact to a degree theoretically impossible given the nature of the phonograph. Recordings of the tones show no deviations from a purely sinusoidal waveform other than those attributable to the recording equipment; when digital recorders are directly connected to SCP-814-1, the resultant tones are sinusoidal to within the quantization error of the equipment used.2 The cylinders can be played individually or in groups, the latter producing various dyad, triad or tetrad octave harmonies.

Humans exposed to the tones produced when SCP-814-2 is played via SCP-814-1 describe subtle but pervasive feelings of harmony, correctness and well-being. This experience is moderately addictive; as such, human experimentation with SCP-814 is to be limited. Subjects exposed to playback of SCP-814-2 via any other cylinder phonograph report no such experiences.

Use of SCP-814-1 to play any audio source other than SCP-814-2 results in massive distortions of local spacetime.

These properties were discovered during Recovery Test Series A. During these tests, human subjects that had been exposed to the output of the SCP-814-1/2 combination became insistent on trying new audio cylinders. A subsequent transient effect — initially thought to be a monitoring glitch, but now thought to have been caused by vigorous removal of audio cylinders while SCP-814-1 was still engaged — resulted in the deaths of all personnel within the test chamber.

After extensive experimentation3, the following general theory of the object's operation has been proposed:

The playback of any tone, or tones, that are not a precise multiple or factor of 440Hz results in space or time distortions. The extent and severity of these distortions depends on the amplitude of the cylinder grooves, the setting of SCP-814-1's Volume lever, and the degree to which the pitch, or pitches, in the source are not precisely in-tune with an idealized 440Hz reference.

Even reference cylinders of a similar type to SCP-814-2 result in noticeable spacetime distortions when played; observers describe a multidirectional "pulsating" effect and a perceived distortion of time similar to that induced by certain hallucinogens. Any other type of cylinder — including conventional music cylinders — induces drastic distortions of localized spacetime when played through SCP-814-1. Only SCP-814-2 has been found to produce tones close enough to the idealized reference to prevent such effects. It has been theorized that the SCP-814-1/2 combination's known effect on human subjects is actually a second-order result of its effect on local spacetime.

Experimentation to discover the full range of SCP-814-1's effects is ongoing.

Addendum: After Incident 814-BREAKGLASS, in which unauthorized recordings were placed in three of the four slots and the Volume setting was set to 6/10, experimentation with SCP-814-1 is suspended indefinitely.