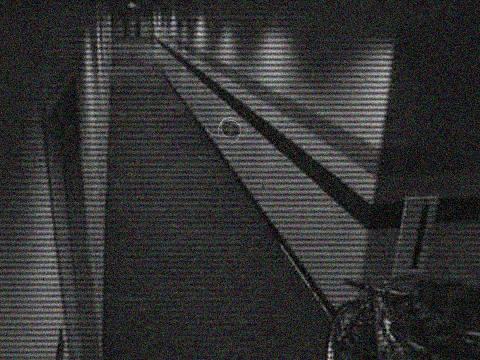 SCP-797 through security camera before Containment

SCP-797 is to be contained in a room six (6) metres in length and six (6) metres in width. Walls (including floor and ceiling) must be at least 10 cm thick. Room is to be air-tight, with filtering system to clean the air of any bacteria. Every seven (7) days, a human cadaver of any age, condition, gender, or race is to be deposited in SCP-797's containment. After a period of twenty-four (24) hours, the cadaver is to be removed. Under no circumstances are any personnel to interact with SCP-797. Should SCP-797 enter a rage state, SCP-797-01 is to be eliminated via incineration and a new cadaver wheeled in, prompting a re-set of schedule.

SCP-797 is an oval-shaped object attracted to either dying or freshly deceased humans. SCP-797 is almost always seen with SCP-797-01, a collection of human flesh from various cadavers. When accompanied by SCP-797-01, subject will attempt to interact with any living human entering its containment.

Testing on SCP-797 reveals that it does not react to non-human bodies, although it is known to 'mistake' organs from other animals to be human, provided the organ is of comparable size and shape as that of a human. The subject appears to have an understanding of human anatomy and will attempt to interact with any personnel that enter its containment, with varying degrees of success. Upon failure, SCP-797 will enter a rage state and begin to dismantle SCP-797-01, launching pieces of flesh at those whom it had attempted to interact with beforehand at a velocity recorded of at least 70 m/s. Contact with the pieces cause no harm beyond normal consequence of being exposed to rotting human flesh. The impact has been known to cause broken bones, cracked ribs, torn organs, and internal hemorrhaging.

When without a body, SCP-797 will attempt to escape its containment. Due to its small size (about five (5) cm in diameter) it will attempt to hide under the clothes of any living human that enters. It also will attempt to hide in shadows, apparently trying to trick personnel into thinking that the subject has escaped. When surrounded by SCP-797-01, SCP-797 shows no desire to escape, instead focusing its attention to attempt interaction with any living human that enters its enclosure. No contact beyond those in the Containment Procedures is to be attempted without permission from personnel ranked level 4 or higher. SCP-797-01 is controlled by the subject using a currently unknown method. The 'puppet' is built around SCP-797, with the subject at its centre. When separated from its controller, SCP-797-01 loses all cohesiveness. Body parts must be periodically replaced due to natural rot. Tests on samples collected from the subject reveal no significant abnormalities. Rarely, the subject will attempt to use SCP-797-01 to talk, producing a [REDACTED] sound accompanied by a release of bacteria in the air. If this situation occurs, no fewer than three (3) agents are to perform Procedure 797-A.

SCP-797 was found at a local hospital in █████, Nunavut, Canada. When found, subject was collecting various body parts from patients around the hospital, and SCP-797-01 consisted of a torso including thirty (30) centimeters of an elderly woman suffering from pancreatic cancer, both lungs from an adult ringed seal, three (3) kidneys (ringed seal, human, donor organ), and the skeletal upper torso from a thirteen (13) year old male, dying of [REDACTED]. Hospital evacuated and all involved citizens provided with Class B Amnestic.

Addendum: Dr.K███M██'s note: Requesting permission to close contact with SCP-797 over [REDACTED] months. I believe through detailed analysis of the subject's actions we can discern more about whether or not it is sapient and its level of intelligence and begin communication instead of simply entrapping.