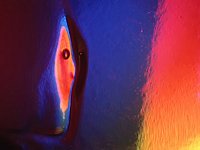 Sonar image of SCP-788 captured prior to containment

SCP-788 is contained at Site ██ in a high-temperature ceramic lined chamber 25 m in diameter, filled with molten lead kept at a temperature of 900 degrees Centigrade. If SCP-788 becomes active or attempts to break containment, its containment chamber is to be cooled until SCP-788 ceases movement. SCP-788 is to be fed 500g pellets of iron and magnesium on a daily basis.

SCP-788 is a creature resembling an African carp (Labeo coubie), approximately 3.2 m in length and composed entirely of ultramafic magma with a 'skin' of cracked picritic basalt. It is currently estimated to have a core temperature of approximately 1475 degrees Centigrade, though its skin temperature is typically much lower. Samples obtained from SCP-788 have shown no differentiation or internal structure.

SCP-788 has been observed with simple behavior identical to that of a typical water-dwelling fish. It does not exhibit unusual strength for a creature of its size, though its sheer size and mass can result in damage to its containment cell if it becomes agitated. SCP-788 consumes several types of ore and minerals, with a preference for iron and magnesium, though it has not been observed excreting any material. Since its containment, SCP-788 has grown approximately 22 cm in length.

On █/██/██, SCP-788 became slow and apathetic for a period of approximately twenty four (24) days, during which its abdomen swelled considerably. At the end of this period, SCP-788 produced over ███ spherical objects, presumably eggs, with an average diameter of approximately 3 cm. Analysis shows that these are composed of the same type of magma as SCP-788, and all specimens have been separated into another containment cell and placed under observation.