There Was A Crooked Man

Personnel must monitor the town of Temby, and continue to develop the entity's profile. Its victims are to be retrieved, incinerated, and cataloged in this file.

Update: Due to recent events, a stronger Foundation presence has been determined to be necessary for the containment of SCP-783 and its related phenomena. An ancillary building near the local hospital, as well as two domiciles, have been commandeered from the locals for Foundation use.

This property in its entirety has been re-designated as a provisional Site-5.

SCP-783 is a hostile entity currently preying upon the residents of Temby, a rural hamlet in Oxfordshire, England. It has a period of activity lasting roughly seventy days over the fall and winter months, occurring every twelve years. It exclusively attacks those who are alone and indoors after sunset.

Buildings housing SCP-783's current target will experience a steady degradation of their structural integrity. Outwardly, this is visible as faults and breaks on the outer facade which lend affected structures an angled or crooked appearance. This anomaly extends to any objects which breach the affected building's exterior, causing immediate and severe deformation that is invariably fatal to living subjects.

To date, personnel have yet to prevent an attack or been able to provide any means of assistance to SCP-783's targets. Due to this, as well as SCP-783's effects on recording equipment, little is known regarding SCP-783's exact appearance and the nature of its anomalous attributes.

Victims of SCP-783 attack exhibit gross deformations in their body structure as the result of dozens of compound fractures along their long bones and severely displaced vertebrae. These are healed via the rapid generation of excessive cartilage and osseous tissue. Victims display hyperelasticity of their epidermis and musculature to accommodate the extra tissue, with one subject's forearm extending over 2.4 meters, and another having a recorded height of 12.5 meters.

The end result of this malformation and elongation are subjects who visually present as being wholly serrated or gnarled.

Despite the nature of these injuries, most victims are alive after the cessation of an SCP-783 attack, though they often suffer full-body paralysis or remain in a persistent vegetative state. Twenty-seven living specimens have been acquired and placed on life support - they are held in a wing of the local hospital requisitioned for Foundation use.

The residents of Temby are aware of the existence of SCP-783, though speaking of it publicly is considered taboo. Researchers have documented a playground song shared among local youths regarding the anomaly:

There lived a crooked man, who made a crooked deal

He kept a crooked cane, and his catch in crooked creel

He stole a crooked child, who cried a crooked squeal

And that crooked little man was broken on the wheel

A month prior to SCP-783's current period of activity, D-209 was selected from a group of volunteers to live in a Foundation-owned property in Temby. Audio/Video recording equipment was installed throughout the house for observation purposes.

The following was recorded on the forty-third day of his stay.

Living Room: [ Live-feed experiences a jagged, vertical distortion in its display. This begins on the left of the frame, near the front door, and crosses over to the right side towards the hallway. It lasts approximately twenty-three seconds. ]


1F Hallway: [ Floodlights from the window opposing the camera are obscured by something entering the hallway. A similar distortion effect occurs center-frame, masking the object. The image quality further degrades before ceasing trasmission. ] 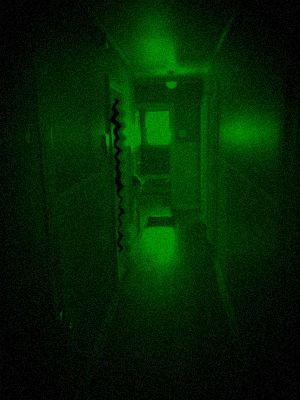 1F Hallway - Distortion can be seen to the left of the frame, as SCP-783 enters from the living room.

2F Bedroom: [ D-209 jerks upright, alert. Claims to hear a slow prolonged scratching sound coming from the first floor. He begins to get up out of bed. ]

Note: [ SCP-783 manifestation confirmed. Visual distortion taken to be an indicator of SCP-783's physical placement within the house. ]


2F Stair: [ Image becomes wavy and distorted. Movement can be seen, though the interference is such that no details can be made out. ]

2F Bedroom: [ Slow, deliberate footsteps can be heard ascending the stairs. D-209 attempts to open the window and escape, to no avail. ]


2F Bedroom: [ D-209 procures a small lamp from the nightstand, and makes several attempts to smash through the window. ]

2F Hallway: [ Sudden video corruption affects this feed as SCP-783 moves directly in front of the camera; the image resolves over the span of thirty-three seconds as it moves farther down the hall. At this point, the only affected area on the recording is immediately outside the bedroom. ]


2F Bedroom: [ D-209 approaches the door, wielding the lamp as a cudgel. He asks for the individual at the door to identify themselves, receiving no response. He then asks Control if any personnel were able to gain entry. Observing personnel maintain radio silence. D-209 braces himself, and grasps the doorknob with his free hand. D-209 throws the door open. ]

Note: [ A loud snapping noise is heard throughout the house. All light bulbs on the premises burst simultaneously, including floodlights focused on the property. ]


2F Bathroom: [ Once the camera adjusts to low-light conditions, SCP-783 comes into view. It is near the open door to the hallway, motionless. ]

2F Bedroom: [ D-209 is screaming, clutching his right arm. It has been fractured just above the elbow, and dangles freely. It is observed to swiftly harden, presumably due to rapid bone growth. D-209 shouts his intent to escape with his life, and charges from the room. ]


2F Hallway: [ As D-209 runs past the bathroom, a loud snapping noise is heard. D-209 falls to the ground, and screams for assistance. He reports that his leg had been broken. ]

Note [ Video corruption instantly begins to affect the kitchen as the sound is made, ceasing in the bathroom. ]

2F Hallway: [ D-209 is able to bring himself to a stand. He displays his right arm for the camera, which has been broken below the elbow. It is angled in the opposite direction from the previous fracture. D-209 curses observing personnel, but reports that his pain has mostly subsided. He limps towards the stairs. ]

2F Stair: [ While trying to navigate the stairs, D-209 trips and falls. Twelve loud snaps are heard in rapid succession. Upon coming to rest, D-209 exhibits several more fractures in various places along each limb. He screams as they set, and spasms on the landing. ]

1F Living Room: [ D-209 can be seen, dragging himself into the room. He strains, moving with great difficulty due to his cumbersome limbs. Each arm is estimated to be over two meters in length, with several inflexible breaks that inhibit motion around obstacles. ]

1F Living Room:: [ D-209 occupies the majority of the living room. His lower legs stretch out-of-frame into the hallway. He has a hand on the knob of the front door, but the length of his fingers impairs the dexterity required to manipulate it. A scratching sound is audible in the hallway. D-209 expresses distress immediately before being dragged backwards forcibly, and off-camera. He begins to scream. ]

At 05:01, a wet suckling noise can be heard, followed by rapid thumping. ]

Personnel tasked with investigating the recent seismic event were met with resistance from Temby locals, who crowded around an area in a field to the south of town. After a brief exchange, Agent Collins drew her firearm and discharged a round into the air. The crowd dispersed.

A dig team was assembled, and by the following afternoon had unearthed a mass grave containing several dozen nude victims of SCP-783. The bodies were well-preserved, yet desiccated. Their number was unable to be immediately ascertained owing to the fact that they had been piled atop one-another. They were oriented head-down, with their arms extending deeper into the pit. Furthermore, most of the victims' limbs had become intertwined or knotted around each other, preventing exhumation without the use of sawing instruments.

Researcher Singer elected to extract a tissue sample. During this process, the soil beneath him caved and he tumbled into the pit; the bodies shifted due to his weight. As he struggled to gain footing, the tangle of limbs gave way, and he fell out of sight.

Agent Collins promptly commandeered a length of rope, and tied it around her waist. She tasked several nearby personnel with reeling her in upon her signal, and entered the pit. Approximately twenty meters-worth of rope was drawn beneath the corpses as Agent Collins descended.

The line became taut after several minutes. She signaled for extraction, and was recovered safely. Upon debrief, the agent testified to the existence of an anomalous locale - the entrance to which is located beneath the victims' corpses.

A temporary leave of absence was granted to Agent Collins.