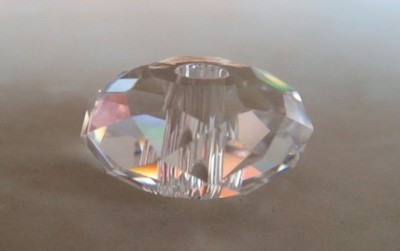 SCP-780 must be kept in a locked steel box 10 cm x 10 cm x 10 cm, with walls at least 1 cm thick. This box is to be kept on a 5 meter pedestal, at the center of a 20 meter x 20 meter concrete room. Individuals wishing to approach SCP-780 must submit to a full-body search, and may not bring plants (living or artificial), images of plants, descriptions of plants, or digital displays of any kind within 10 meters of SCP-780 except as part of a preapproved test protocol. Individuals with plant tattoos are likewise forbidden from approaching SCP-780 except during testing.

SCP-780 is a small bead, 1 cm in diameter, shaped like a rounded gem with numerous facets and a hole at its center. It appears to be made of a clear amorphous substance; studies suggest it has a structure similar to that of polyvinyl chloride, but this does not account for its reaction to plants. While SCP-780 does not melt at temperatures exceeding 3500 K, cooling it to below 24 K temporarily changes its structure into a crystalline form, allowing it to be damaged by blunt impacts.

When a plant or representation of a plant (including artificial plants, photographs of plants, drawings and paintings of plants, particularly vivid textual descriptions of plants, or any of the above appearing on a screen of any sort) is placed within 10 meters of SCP-780, it begins to levitate and will fly towards the plant. How SCP-780 detects plants is unknown at this time. If restrained, SCP-780 will become increasingly agitated until the plant is removed from its radius.

If allowed to come into contact with the plant (hereafter the "host plant"), SCP-780 will stick to it for a period of five (5) seconds, at which time it will fall to the floor. Once it lays flat against the ground, it cannot be removed except as noted below. Within ten (10) minutes, a shoot will be seen growing from within the hole at the center of SCP-780; this will mature to a fully-grown specimen of the host plant within twenty-four (24) hours. This new plant is designated SCP-780-1. Even if the host plant was not a living, physical plant, SCP-780-1 will be, though in all other traits (color, height, general form) it will match the depiction of the host plant.

SCP-780-1 has the same requirements for sun and atmosphere as the host plant, but does not have a root system, and therefore does not require water or any particular soil conditions. Despite lacking roots, SCP-780-1 will not fall over regardless of imbalance or pressure applied; attempts to dig up the ground SCP-780-1 sits on result in [DATA EXPUNGED]. SCP-780-1 is equally susceptible to damage as the host plant; anything which would kill the host plant will also kill SCP-780-1. Upon its death, it will rot unusually quickly, and SCP-780 may be retrieved.

At maturity, each instance of SCP-780-1 produces new copies of SCP-780. In flowering plants, the copies are found at the base of each flower, usually replacing the ovary. In non-flowering plants, the copy replaces seeds, spores, or other such propagules. Each reproductive structure (flower, cone, spore capsule) produces exactly one copy of SCP-780. When SCP-780-1 portrays a plant species that does not undergo sexual reproduction, a single new copy of SCP-780 forms at the base of SCP-780-1. These new copies of SCP-780 will break out of SCP-780-1 and affix to the nearest plant not generated by SCP-780, or remain inert if no such plant exists within their radius. Flowers or seeds removed from SCP-780-1 before maturation contain smaller, misshapen copies of SCP-780, which do not react to plants in any way.

Addendum 780a: SCP-780 was recovered when flyovers of the Atacama desert reported an odd stand of mangrove trees where existing water should have been insufficient for their survival. Initial response from the Chilean government included a botanist carrying "███████████ ██ ████," which included a picture of a rose bush on the cover. Upon approaching the site, multiple copies of SCP-780 flew toward the book, and the researchers fled; when they returned a day later, many more rose bushes were growing at the site. Communication between the research team and their contacts was intercepted by Agent █████, who intervened on behalf of the Chilean government. Mobile Containment Task Force ███ ("███████ ████") was dispatched, who used incendiary devices to incinerate all plants in the area. All instances of SCP-780 were retrieved, and all but one has been destroyed to reduce the risk of further growth.