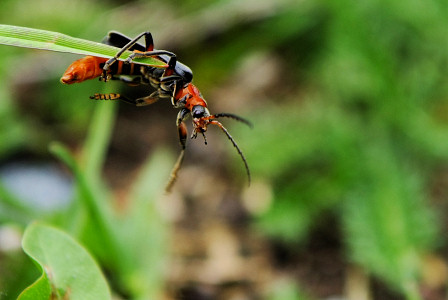 In the event of a suit breach, compromised personnel are to be removed from the area and detained for twenty-four (24) hours. SCP-779 is to be provided with one (1) liter of milk each day.

SCP-779 is a species of insect similar in appearance to the common bee or a wasp. Specimens of SCP-779 are typically colored red and black, although variations in this have been noted among their populace. SCP-779 usually breed and live in human residences, but sightings of SCP-779 have been reported at rivers and lakes, suggesting the possible existence of a subspecies.

SCP-779 operates with a typical social system; a queen is always present in the center of the nest and reproduces constantly, while workers retrieve food for the rest of the hive by stealing from the residence. SCP-779 queens are recognizable by the distinctive yellow spot present on their backs.

SCP-779 nests are usually formed from whatever materials are available in a section of the human residence with little traffic, such as an attic or basement. SCP-779 have been observed to operate at all times of the day. When a nest has been formed, specimens of SCP-779 will attempt to sting residents, injecting them with their hallucinogenic venom. After this initial injection, SCP-779 will sting their victims at least once per day to keep the venom in their system.

When injected with the venom, victims of SCP-779 will perceive SCP-779 as small humanoid figures with wings and believe that SCP-779 are assisting with the maintenance of the residence. Victims will continue to believe this even if the residence undergoes structural collapse.

Continued exposure to SCP-779's venom can result in victims viewing them as their 'children' and defending them from most threats. SCP-779 appears to only sting humans, and will not undergo this parasitic relationship with other species.

SCP-779 will consume most edible substances, with a particular affinity to milk. Consumption of milk seems to be remedial to SCP-779. Injuries such as torn wings and missing legs have been observed to heal in a matter of hours after consumption.

Victims of SCP-779 will usually give most of their food to SCP-779, but will not allow themselves to succumb to malnutrition. SCP-779 can exist in symbiosis with their victims for months or years, until the victim is cut off from the supply of venom.