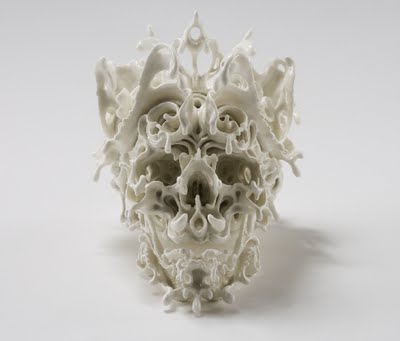 All supplies of SCP-774 are to be kept in sealed metal barrels designed for hazardous chemical waste. Subjects are to be maintained on hospital beds, kept alive via Procedure 17-A.

SCP-774 is a by-product of the halogen azide [REDACTED] when [PROCESS REDACTED]. When in contact with the skin, it permeates the body's tissues and selectively attacks bone, dissolving the bone mineral and leaving only the soft collagen. This can occur in minutes or over the course of days, depending on the degree of exposure.

The only bone that is not affected by the initial reaction is the skull. However, shortly after the other bones begin dissolving, the anomalous properties of SCP-774 manifest. Calcium leached from the rest of the body is deposited on the skull, creating grooves and ridges that grow from the interior and exterior surfaces of the skull, forming symmetrical patterns of increasing complexity that intrude into neighboring tissue, eventually erupting from the skin or growing to meet other bone tissue. These eventually fuse the bones of the skull, rendering the mandible immobile. The largest pattern observed so far is two meters across, induced by procedure 17-A.1

Intrusions in the sinus cavities create whistling sounds in the subject's breathing which rapidly change pitch and tone, though each skull has a different set of tones. The effect is similar to birdsong. While subjects affected by SCP-774 are unable or unwilling to communicate, their heartrate and breathing becomes more regular when able to hear other late-stage subjects (See Addendum 774-2). 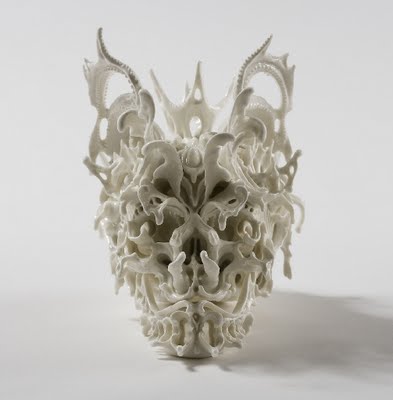 Subjects typically expire following the collapse of the ribcage or damage to the spinal cord due to the loss of the spine. However, artificial supports can be implanted, as per procedure 17-A, prolonging life. Subjects kept alive after the complete loss of non-cranial skeleton can be induced to further growth by implanting new bone material. Subject SCP-774-17 has been kept alive twelve years at the time of this writing. Trace amounts of SCP-774 are still found in Subject 17's bloodstream, though it is unknown if it is manufactured, or if it remains from the initial exposure (See Addendum 774-3).

Addendum 774-1 Doctor Mann was able to induce growth in specific directions through careful breaks and cuts into the bone tissue. However, after several weeks, the new growth was destroyed, and the former pattern reasserted itself.

Addendum 774-2 Analysis of the whistling shows distinct patterns, some of which have been mapped to specific external stimuli. Doctor Mann has requested permission to vivisect a 774 subject for the purpose of examining continued function of the linguistic centers of the brain.

Addendum 774-3 Subject 774-24 was isolated from other test subjects. After several weeks in which its whistling grew more agitated, started producing viscous fluid from the tips of its protrusions, which proved to be further quantities of SCP-774. Two researchers working in the room were affected. Once they progressed to the whistling stage, the bone stopped producing the fluid. Their patterns were identical to Subjects 774-17 and 774-21 respectively, including range of whistles. They were termed Subjects 774-26 and 774-27 following Procedure 17-A. Doctor Mann has decided to keep them isolated for the time being.

Addendum 774-4 Following a renovation of Site-██, Subjects 774-24, 774-26, and 774-27 were placed into containment with the other subjects. Shortly after, the growths of Subjects 26 and 27 began to rapidly reshape, bone being subsumed and reformed into different patterns, including whistles. Subject 26 is now identical to the terminated Subject 25, while Subject 27 shows a new growth pattern entirely. 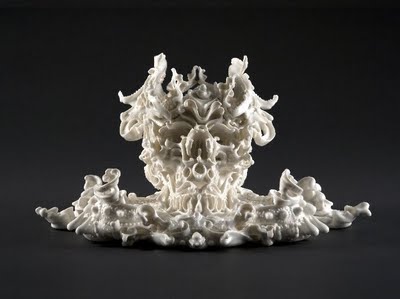 Footnotes
1. Investigation into whether the effects of SCP-1808 instances involve a variant of this phenomena is ongoing.
SCP-773 SCP-775