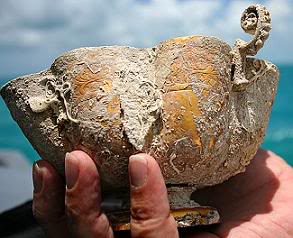 SCP-769 must be kept inside a secure, waterproof vault whenever it is not in use. No fluid is to come in contact with the bowl outside of approved experiment protocols.

SCP-769 is a cup ten centimeters tall and twelve centimeters across. It is made of pottery with a golden glaze. It is covered with a white residue. Several preserved parts from cephalopods and other sea creatures are stuck in the residue. A pattern is carved into its rim; however, the pattern is obscured by the residue. It has been decided not to attempt removal of this residue or the items stuck within it, as efforts to restore SCP-769 may hamper its effects even further.

SCP-769 is an artifact of the █████████ civilization that existed ████ years ago in modern-day ██████. Water from the object alters the memories of those who drink it.

When a subject drinks from the cup (or water that has been poured from the cup), new information is written directly into the subject's brain. However, they lose memories they already possess, much like a computer's storage being overwritten. The memories lost are unpredictable, though usually comparable to the information gained. All water from the bowl must be drank, or else the subject gains fragmented, unreliable information.

The information given is seemingly random, coming from a repository of information from the █████████. It includes cultural, technological, and military information. It appears that it was intended as an encyclopedia. However, so far no method has been found to retrieve specific information from the goblet. Whether this is due to problems inherent in the storage method or to the degradation of the cup over time is unknown at present.

Full debriefing of the subjects takes approximately one week, though it can take longer depending on the information gained.

Subject D-769-32 has been useful in translating information, and has therefore been removed from the regular termination schedule, until such a time as she can teach the language to others.

Addendum 769-1 The results from Subject D-769-37 have raised this object from a mild curiosity to a priority. Recreating the power source for that engine would prove invaluable to the Foundation.

Addendum 769-2 Per the Administrator's instructions, Subject D-769-71 was given multiple exposures to SCP-769. However, the results have proven unsatisfactory due to the possibility of losing valuable information.

Addendum 769-3 Reports will move from a weekly to a monthly basis.

Addendum 769-4 Future reports to the Administrator will no longer contain a listing of all findings. Only those of strategic importance will be passed on. The Administrator does not want to know about █████████ courtship rituals unless they involve lasers, zero-point generators, or flying cars, and how to build them.

Addendum 769-5 Reports will move from a monthly to a bi-monthly basis.

Addendum 769-6 Due to stronger demand in other areas, resources for this project are being cut by 80 percent.

Addendum 769-7 Reports will move from a bi-monthly to a semi-annual basis.

Addendum 769-8 After ten years, several thousand test subjects, and nothing to show for it but a handful of fascinating but ultimately useless technical schematics, results from SCP-769 have begun to repeat themselves. Perhaps the encyclopedia is damaged, and has lost other information, as well as any indexing system. Perhaps this was all that was ever on it. In any event, it is now advised that the project be shelved until such a time as the information can be more efficiently catalogued.

Subject D-769-01: Learned the name of the stars in the ██████ language, as well as their positions. However, she lost all memory of other names, including her own.

Subject D-769-13: Learned several songs in the █████████ language. It could not be determined what he lost.

Subject D-769-18: Learned the history of ██████, a politician from █████████. Lost all memory from his sixth birthday to halfway through seventh grade.

Subject D-769-25: Gained a tactical assessment of several other civilizations. Only the ████████████ were determined to be a threat. Suspected capabilities were listed, but are difficult to decipher without knowing the size of listed units or the abilities of vehicles.

Subject D-769-30: Learned the rules to a children's game involving sticks and disks. Lost all memory of American politics.

Subject D-769-32: Learned the █████████ language, but forgot how to paint, her former career.

Subject D-769-37: Gained schematics for an engine capable of generating far more thrust than any we currently possess, which could explain the █████████ spaceflight capabilities. However, they call for an on-board power source generating over a thousand megawatts, with only two cubic feet allotted for it. It is hoped that designs for the generator can eventually be found. The subject lost all memories of his mother.

Subject D-769-41: Gained schematics for an antique internal combustion engine. The design is inferior to those in use today, although the alloys it calls for are of strong interest to the Foundation.

Subject D-769-54: Learned the history of the temple of ████. Subject broke down while describing it, and, when left unattended for a short period, took his own life. The guards were severely reprimanded.

Subject D-769-71: After O5-8 reprimanded Dr. ████ for gross waste of class D personnel, Subject D-769-71 was given doses several times. The first time, he gained a novel, but forgot how to ride a bicycle. The second time, he learned a form of martial arts, but lost all memory of his faith. The third time, he learned the life cycle of the mammoth, but lost all memory of his childhood. The final time, it could not be determined what he gained, as he seemed to lose all ability to communicate. Subject D-769-71 was terminated several days later. It appears repeated exposures have a point of diminishing returns, taking more memory than previous exposures.

Subject D-769-105: Learned the names of all the Exarchs of █████████ and their families going back several hundred years. He forgot how to operate any technology made in the last ten years.

Subject D-769-2045: Learned the history of █████████ dance. Lost all memory of sports.

Subject D-769-2070: Learned the names of the stars in the █████████ language. Lost all memories of the past three years.