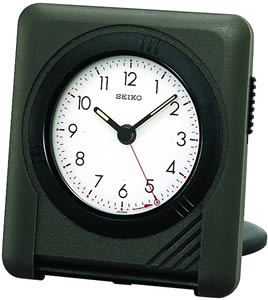 SCP-768 is stored without batteries in a standard Safe-class secure locker at Site ██. Access to SCP-768 requires approval from at least one (1) Level 3 Senior Researcher, and Site ██ Security must be notified of any experiments to be performed on SCP-768 at least twenty-four (24) hours in advance.

SCP-768 is a Seiko-brand travel alarm clock that is physically identical to a regular unit of its model in all regards. Its anomalous property is activated when the alarm feature of the clock is set and the alarm activates: instead of emitting a beeping alarm as in normal units of its model, it instead causes all alarms and alerts within 300 m to trigger. How SCP-768 accomplishes this is currently unknown, as disassembling SCP-768 and analyzing its components has revealed no irregularities or anomalous materials.

Experimentation has shown that the types of alarm systems SCP-768 is capable of remotely triggering includes but is not limited to:

SCP-768 will cause any automated responses to such alarms to trigger, but does not appear to cause what might normally trigger these alarms to occur. A phone ringing due to SCP-768 activating may cause an answering machine to start, but nothing will be recorded as no connection is made.

SCP-768 came to the Foundation's attention after routine monitoring of municipal incident reports turned up a case in ███████ City, █████████ in which hundreds of fire and car alarms were set off simultaneously in a residential area. Investigation led to the discovery of SCP-768 in the possession of a Mr. ███████ ███████████. Subject claimed to have bought the clock from an online shop (████████████████████), which recommended the clock as being "fit to wake the dead". Subject passed a polygraph test, but agents failed to locate the shop in question, and Mr. ███████████ was released after being administered a class A amnestic and given a replacement clock of similar make and model.

Research on SCP-768 to determine its method of operation and possible applications have been approved.

Initial experimentation conducted with SCP-768 caused the triggering of multiple containment breach alarms at Site ██, including that of Euclid-level SCP-███, SCP-███, and Keter-level SCP-███. Automated defense systems and self-destruct mechanisms were armed before the research team managed to alert site security and stop the response.

Due to the potential for triggering emergency responses, future research with SCP-768's effects must take place outside of the range of any alarm systems connected to critical systems or SCP containment alarms.

During experimentation on █████ ██, ████, Dr. █████████'s heart monitor was set to an alarm state by SCP-768, causing his pacemaker to increase his pulse rate to nearly three times his normal rate. Dr. █████████ was hospitalized but fully recovered after the incident. Future experimentation must be performed by research staff without pacemakers or personal medical alert systems.