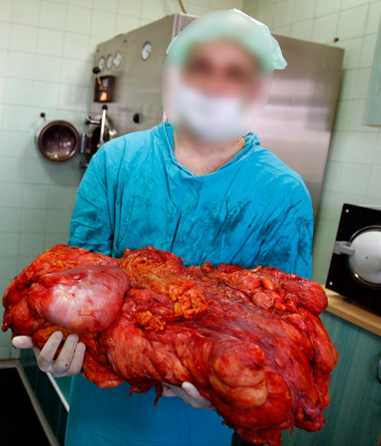 The late Dr. █████ holding a portion of SCP-763 removed for testing which contained three livers, two kidneys, and a pancreas.

SCP-763 is contained in Sub-Basement G of the now-defunct ██████ █████ veal production facility on the outskirts of ██████, Illinois. After the discovery of SCP-763, the Foundation acquired the facility, which was secured and designated Biological Site-██. The facility is still supplied with the liquid feed solution previously used to nourish veal calves, though only enough to maintain SCP-763's growth. The feeding system established by the facility's previous owner, Klaus ████, has been documented and should be maintained unless a more efficient feeding method is devised. If any components are added to SCP-763, the dosage of nutrient solution must be scaled up accordingly. Consult document SCP-763-█ for the volume and release time of solution to be provided per component.

Because of SCP-763's ability to absorb human organic matter into itself, it is vitally important that no personnel touch SCP-763 with bare skin.

SCP-763 is a mass of human organic tissue occupying approximately three hundred (300) square meters of space with an estimated mass of over four thousand (4,000) kilograms. It is mostly in an irregular configuration of tissue, with the exception of SCP-763-A. Much of the mass of SCP-763 is muscular tissue with an abundance of blood vessels. This muscle tissue is highly atrophied and non-motile, though despite lack of use there is a great amount of blood flow at all times. Most of the structure is relatively thin at around ten (10) centimeters thick, allowing the blood flow to diffuse the high heat generated by the central mass, which is a large lump approximately two (2) meters high. This blood flow is provided by a large, central collection of hearts and a number of other hearts arrayed throughout SCP-763's structure. All the organs of the human body are present in SCP-763, located in a relatively even distribution throughout the system. The lungs are fed by a number of mouth-like round holes in SCP-763's skin. The feeding tubes pass directly into SCP-763 as though the flesh grew around them as its mass expanded.

Researchers believe that the blood vessels and organs are essentially a support system for what has been designated "the cluster". The cluster is an interconnected network of thirty-seven (37) human brains of varying sizes, connected by chains of cells resembling neurons. This array is enclosed by a multi-layered arrangement of bone growths. The bones most closely resemble ribs, though they exhibit offshoots that allow them to interlace into a tighter structure. Initial analysis revealed a far higher than normal amount of neurotransmitter activity. Over time the individual brains each enter a "resting" state with neural activity consistent with REM sleep, in time periods consistent with a polyphasic sleep pattern. This resting state lasts approximately forty-five (45) minutes. At any given time there are five (5) brains in this resting state while the remaining thirty-two (32) brains are in the active state.

A collection of bone and nerve fibers resembling a spinal column approximately three (3) meters in length extends from the cluster to join with the spinal column of SCP-763-A. SCP-763-A appears to be the body of the facility's former owner, Klaus ████. The body is only partially absorbed into the rest of SCP-763, retaining all its (presumably) original organs and general shape and structure. To date it has shown no signs of movement or further absorption. It should be noted that other absorbed subjects have been completely integrated into SCP-763 within three (3) months. When SCP-763 was discovered, SCP-763-A was in a seated position, in which it remains. There was a table in front of SCP-763-A with a sheaf of papers on them, completely decayed from the warm, damp conditions of Sub-Basement G. SCP-763-A's hand held a pencil, apparently poised to write. Any previous writing has been lost with the degradation of the paper. SCP-763-A's facial expression is one of intense concentration or perhaps pain, with features contorted and eyes closed. Unlike the rest of the muscular tissue in SCP-763, SCP-763-A is not atrophied, despite having exhibited no movement to date. Researchers assume that SCP-763-A remains unabsorbed to function as an interface with the rest of SCP-763. To date no stimulus has provoked a response from SCP-763-A, other than autonomic reflexes and immune system response.

Since its discovery by the Foundation, SCP-763 has incorporated biological material from seven (7) humans (two (2) security personnel, one (1) medical technician, three (3) Class-D personnel, and Dr. █████). Direct skin contact with SCP-763 causes tiny barbs to hook into the skin and administer a paralytic neurotoxin. As soon as the subject is paralyzed, digestive acids are secreted and begin to dissolve the skin where contact was initiated. Once this is done, the skin will begin to heal at an accelerated rate, with the subject's skin now bonding with SCP-763. This process of dissolving and re-healing is repeated over and over with the subject becoming progressively more integrated into SCP-763. After a subject is mostly absorbed, their organs begin to migrate to different areas, taking their place throughout the network as needed. In some cases, organs that are seemingly not needed are digested and used for additional nutrition. Most subjects have been fully absorbed within two months. Dr. █████'s organs did not stop their movement until more than three (3) months had passed. Researchers believe that this longer time was due to the inner cage around the cluster moving to accommodate the addition of Dr. █████'s brain. To date this is the only time at which a brain has been added, with all others digested.

While securing the premises, security personnel J. ██████ and M. ███████ failed to check in for their scheduled updates. A second team was deployed and discovered J. ██████ and M. ███████ unresponsive and in the preliminary stages of absorption. Attempts to extricate personnel from SCP-763 resulted in the deaths of both staff members, as well as a medical technician who made direct skin contact during surgery.

After noticing irregularities in the radio updates coming from Biological Site-██, a security team was dispatched to investigate. Armed Response Team Omicron-3 discovered all site personnel poisoned with the exception of the head researcher, Dr. █████, who was found mostly incorporated into SCP-763. Apparently, he had made a large incision in SCP-763 and folded himself inside. A note was found near Dr. █████'s discarded clothing. The note is reproduced below:

I have to know. Six months and not a single inkling of what's going on in there. I don't give ███ █████ in a █████ ███ about organ function and immunodeficiency. I need to know what they're… what it's thinking.

I need to know. I will know.

Despite initial desire to terminate the biological components of Dr. █████ for his betrayal, Armed Response Team Omicron-3 was instructed to desist after replacement research personnel discovered that Dr. █████'s brain was being incorporated into the cluster. The additional research data gained by observing this process was deemed more important than revenge.

Request by researchers that SCP-763-A be provided with replacement writing materials in the event that it should attempt to write is currently pending.