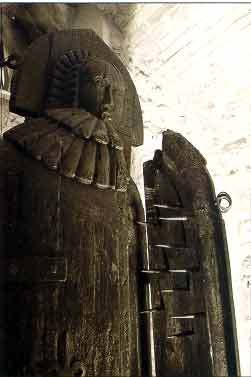 SCP-762-1 before being placed in long-term storage.

SCP-762 is held inside a storage crate at Site ██. As SCP-762 does not appear to be dangerous to anyone not placed inside of it, no further precautions are required. Anyone wishing to experiment with SCP-762 must get authorization from Dr. Rights.

SCP-762-1 is a torture device similar to the infamous Iron Maiden of Nuremberg. It was recovered in 19██ from a box in the basement of [DATA EXPUNGED] in ██████, Austria. When opened, SCP-762 was found to have a male human in it, now known as SCP-762-2. When found inside SCP-762-1, SCP-762-2 had the device’s large spikes embedded in his flesh, but when removed from SCP-762-1, all of the subject’s wounds healed instantly. SCP-762-2 was found to be completely catatonic, but otherwise in decent health except for several rotten teeth and a large scar on his left arm. Given the unique properties of SCP-762-1, it may be impossible to determine how long SCP-762-2 was in the device. Dating on the device shows that it dates back to the late fifteenth century, so it is possible that SCP-762-2 has been in the device for centuries.

Any person placed inside SCP-762-1 appears to enter a state of suspended animation. Subjects no longer need food, water, or even air when inside SCP-762-1. Subjects also appear to be immune to the effects of disease or injury when inside SCP-762-1, including the large wounds inflicted by SCP-762-1 itself. Subjects do, however, remain conscious, and the experience is described as being very painful. Once subject is removed from SCP-762-1, all wounds inflicted by the device are instantly healed. Since all physiological processes except for cognition are suspended while in SCP-762-1, it seems likely that a person placed in it will not age.