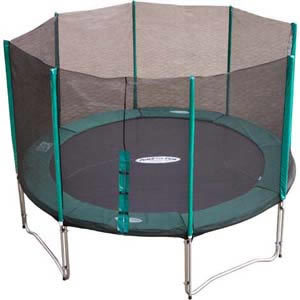 SCP-761's frame is to be contained in a standard containment chamber, located in Site-77. No net is to be attached to SCP-761, except for testing purposes. The testing chamber is to be suspended 25 meters from any other surface, only accessible via elevator. Any materials or documents relating to SCP-761 have been stored in Site-77's non-anomalous documentation area.

SCP-761 is a steel trampoline frame, 2m in diameter and 3.5 meters tall. It shows no manufacturers mark, apart from a tag on the bottom of the original net which reads "PROTO-5".

Any solid object impacting SCP-761's surface with a momentum exceeding 250 kg*m/s will vanish upon impact. Testing has determined that the object is instantaneously transported to a random location up to fifteen meters away, while retaining its momentum. This effect has resulted in a number of users being entombed and asphyxiating. The object transported by SCP-761 does not appear to displace any material upon relocation, suggesting matter replacement based on volume. The location to which SCP-761 displaces the material is not known at this time.

SCP-761 was recovered from a residential home in ███████, IN1, where it had been in use during a children's birthday party. Local police had been called to the home when several children using SCP-761 had been subjected to its anomalous effect. Foundation agents were able to cover up the incident, issuing Class-B amnestics to witnesses and relatives. During follow-up containment operations, an address was found leading to a party supply store from which SCP-761 had been rented.

The company in question was investigated and found not to stock trampolines. Security camera recordings showed SCP-761 being sold in front of the store by an employee, whose vehicle was recovered behind the store. Interviews with the subject indicate that she had obtained SCP-761 from a local waste dump and had no knowledge of its properties. However, several documents recovered from the vehicle indicated otherwise. Subject was not detained and has been designated a person of interest, with attendant remote monitoring.

It has been found that subjects affected by SCP-2403 are not subject to SCP-761's anomalous effect.

Addendum: Excerpt from a recovered document. The document in question appeared to regard to SCP-761's development, but was heavily damaged by water and age. The following sections are the largest legible portions of the text.

….tests appeared to indicate steel was the best material, due to its durability. The safety features have seen some good progress in the prototyping stage, and we hope to see them implemented by June. Bernard thinks it'll be a real hit and I agree. The saf…

We have a prototype! Jason tossed a cat onto the trampoline from 30 feet and it just appeared like 10 feet away! Now, it was stuck in the ground, but it was alive! Bossman says we're moving onto more advanced tests soon. I hope we aren't being too hasty, but this is some exciting stu…

We started limited human testing today. We had a group of 10 boys and 10 girls together, and they seemed to be pretty excited. We had them jumping on the prototype, and they seemed pretty happy about it. During displacement they were a little woozy, but fine. The only bad bit was when one kid got his foot stuck in a

i feel like I'm gonna be sick we were testung today i don't know what went wronf but one of the kids just disappaered. we dug around everywher and you know where she was? IN the concrete. we need to stop,we need to stop. This is wrong wrong I killed a kid today. I let them kill her

they did it wrong. I warned them this would happen. Do they listen to me? No, they go out and sell them anyways. They aren't safe anymore, we know this. All it was supposed to do was take kids off if they were too big or got unruly. But they all go under. It's killing them and nobody is stopping