"Watch for the white bird" 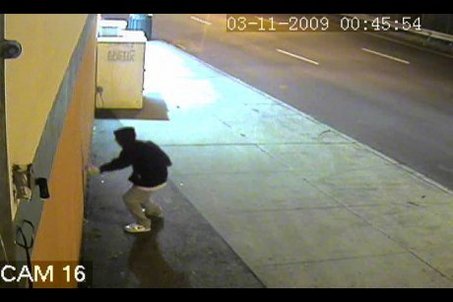 The capture of SCP-755-a is to be considered a K class priority to all personnel assigned to SCP-755. Should SCP-755-a be captured alive, all possible effort is to be made to ensure their compliance, and they are to be delivered to Humanoid Detaining Facility 17 for questioning and study.

Any and all instances of SCP-755-b discovered are to be reported immediately to a superior and destroyed if possible. After encountering an instance of SCP-755-b, the discovering party is to seek a safe location within view of the instance and to remain observant for their own safety until the arrival of MTF Gamma-30, then to obey any orders or requests for assistance made by the MTF leader at that time.

SCP-755-a (hereafter referred to as 'the vandal') is a graffiti vandal who is thought at the time of the archiving of this report to be active in San[REDACTED]ia, though the work of the artist has been sighted in eight other cities in the continental US and Europe, including Denver, CO, Newark, NJ, Muni[REDACTED] Security footage shows the vandal to be a light-skinned individual with a slim build who stands approximately two meters in height. From the basic body type shown in the footage, it is assumed though not confirmed that the vandal is male. The vandal regularly travels large cities, leaving behind instances of SCP-755-b. SCP-755-b (hereafter referred to as 'the graffito') is a graffito, style and form varied by instance, that invariably reads (with incorrect capitalization remaining consistent in all instances) "WAtCh For thE WhitE Bird.". The graffito is typically written directly onto surfaces with marker or paint, or in some recorded instances (list available to personnel with level three clearance or higher upon request) inscribed on scrap material and left in prominent locations. The writing materials appear to have no anomalous properties, and several recovered instances are stored for study in the low risk materials sector of Site 93. Persons who read the graffito are invariably injured or killed in apparent accidents involving a white bird of some description. Extensive research has confirmed a statistical correlation between the accidents and having read the graffito, and that instances of the phrase written by persons other than the vandal do not correlate with accidents or injuries to any measurable extent.

SCP-755 was brought to the attention of the Foundation when an EMT discovered a journal belonging to the late investigative journalist Graham Scott on the scene of the seven-car pileup that resulted in the deaths of Scott and ██ other individuals. The journal details Scott's attempts to locate and interview the vandal, who he believed was attempting to warn the 'victims of the whte bird [sic]' in order to save their lives.

The white bird mentioned in the graffito and Scott's writing has not been confirmed to exist. In many events no bird can be confirmed to have been involved outside the direct testimony of the injured party, with some or all other witnesses claiming not to have seen any such avian at all, or with eyewitnesses disagree on the positioning, exact coloration, and species of the bird.

Addendum 755-1 Despite Scott's assertions, many Foundation researchers suspect that the vandal's role in the events preceded by viewing the graffito are causal rather than prophetic, and that the vandal seeks to further some agenda of their own, or merely enjoys the thrill of causing suffering and death. In light of this possibility, and given the established correlation between instances of the graffito and injuries or fatalities among otherwise unrelated persons, SCP-755 has been granted Keter level containment required status, and MTF Gamma-30, "Whitewatch", has been created to liaise with law enforcement to capture the vandal for study and questioning and destroy instances of the graffito as they are located.

Addendum-755-2 On [REDACTED]pears to have bypassed [DATA EXPUNGED] normal for an instance of the graffito but for the addition of the words "I'm sorry" in a small cursive font. The event was filed as usual by mem[DATA EXPUNGED]

Travers: Ladies and gentlemen, this is your captain speaking. Sorry about the flight delay. I'm sure you all saw the maintenance guys cleaning the graffiti off of the boarding ramp. Now that that's all out of the way, we can get ready to take off. It's a beautiful sunny day in LA, and weather conditions are absolutely perfect for flying. This is flight two seven niner to Houston, by the way, so if you aren't supposed to be onboard you should go ahead and disembark while you still can.

Travers: This is your captain speaking. I'm sure you've all seen the smoke, but don't panic, it's just a bird that got sucked into the engine. In a moment, the oxygen masks will drop as I prepare for an emergency landing. Put those on and follow the flight attendant's instructions, and we'll have you guys safely on the ground in no time. Again, please do as the flight attendants ask, and remain calm. Everything will be just fine.