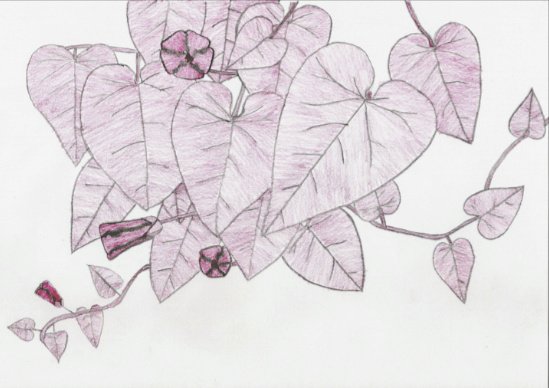 SCP-754 rendered in pencil and crayon

SCP-754 is to be kept under constant surveillance in a Bio-Hazard Containment Chamber. The room must be equipped with a liquid nitrogen emergency coolant system. A shallow planter of standard potting soil has been placed next to SCP-754 to provide a "target zone" for germination events.

No instances of SCP-754 are to be retained outside of use in sanctioned experiments. Material containing SCP-754-1 may be incinerated.

To dispose of SCP-754, the room must be sealed and liquid nitrogen piped in until the ambient temperature has been at or below 150 K for a minimum of fifteen (15) minutes. SCP-754, any surrounding soil, and all instances of SCP-754-1 shall be incinerated, save one paper fragment of approximately twenty-five (25) square centimetres, which is to be treated as "seed stock" with a freshly-illustrated sheet. If SCP-754 germinates from a location other than the provided planter, the site should be sterilized with hydrochloric acid. In the event of containment system failure of SCP-754, its growth will be inhibited by temperatures below 250 K until automated systems are restored.

One (1) standard sheet of paper with hand-drawn illustrations is to be placed on the table as needed. Current procedures call for the replacement and disposal of the oldest illustration once the newer sheet shows evidence of buds; at the current rate of growth, replacement should occur every two to three days. If this rate is observed to increase, notify the level 3 supervisor (as of 20██/██/██, Doctor Cairns). Under no circumstances are any SCP objects containing hand-drawn illustrations to be allowed within twenty (20) metres of SCP-754-1.

SCP-754 is superficially similar to Convolvulus arvensis, a flowering vine commonly known as "morning glory" or "field bindweed" in North America. Its leaves and vine are red with delicate black veins. Flowers, when present, are red with black mottling. SCP-754 will propagate in a manner similar to bindweed. However, it can overgrow any object, including those typically resistant to plant growth and water too deep for root stabilization. It can attain a top growth rate of █ metres per hour. It is inhibited by temperatures below 250 K (-23°C), and enters a dormant state when chilled below 150 K (-123°C).

SCP-754 is not limited to normal growth patterns, and can grow in paper media as an illustration (designated as SCP-754-1). It manifests itself as an additional image in hand-rendered illustrations, indistinguishable from the original contents in terms of medium, style, and scale. SCP-754-1 will propagate through the white space remaining on the material, as well as overgrowing illustrated objects. The growth rate is constant in the scale of the illustration; consequently, the linear spread across the material is not constant, and depends on the illustration. SCP-754-1 can also propagate to other illustrations within a fifteen (15) metre radius of the original medium; the time required to do so decreases with proximity and physical contact. Illustrations containing SCP-754-1 demonstrate a mild mind-affecting property: individuals below eighty (80) on the Psychic Resistance Scale will insist that SCP-754-1 has always been present in the illustration, and those below ninety (90) on the Psychic Resistance Scale will be reluctant to destroy SCP-754 unless prompted to or trained.

Illustrations containing SCP-754-1 will animate and change in response to the growth of SCP-754-1. Illustrations appear to be moving at a one-tenth (0.1 x) speed slow motion. It has not been determined if this occurs as a stop motion effect or as a constant movement. Volitional beings depicted in the illustration will react to SCP-754-1 and utilise other depicted objects as appropriate. The most common reaction observed is the attempt by individuals in the illustration to restrict or directly impede the growth of SCP-754-1.

When no white space remains on any illustrated material within range, SCP-754 will germinate within five (5) metres of SCP-754-1. This occurs no more than three (3) hours after the complete overgrowth of all white space in range. It will tend to appear where a non-anomalous plant could germinate.

SCP-754 instances can be destroyed by incineration. However, any root fragments left intact will be stimulated and cause immediate regeneration of SCP-754 within six (6) hours. Additionally, any chordate with mucous membrane contact to the ashes within twelve (12) hours will become a new medium for SCP-754 growth. Further instances of SCP-754 will then erupt from the petechiae of the plant. Dormant SCP-754 can be incinerated without inducing generation; root fragments must still be destroyed to prevent normal plant regrowth. No side effects have been observed from the incineration of material bearing SCP-754-1.

Addendum 754-01 - Circumstances of retrieval SCP-754 was first brought to the attention of the Foundation when police officers in █████████, France, arrested an extremely agitated office worker who was found attacking courtyard weeds with a carbon dioxide (CO2) fire extinguisher. Foundation intervention was required when forty-five (45) infestations of SCP-754-1 subsequently developed in residential areas. Due to recommendations made by an office worker in custody, the containment team suffered no casualties. Following interrogation that lead to current containment procedures, the captured person of interest was released and amnesticized, though he is under periodic surveillance for future encounters with SCP-754.

Addendum 754-02 After the events of Experiment 754-07, personnel with figurative tattoos, brandings, or other decorative body modifications are forbidden from coming within twenty (20) metres of SCP-754, save for participation in approved experimentation.