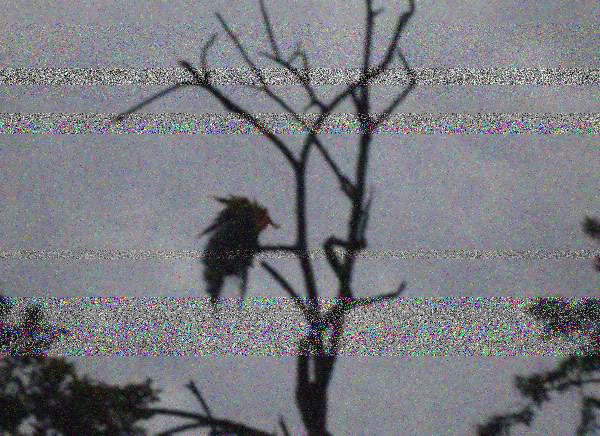 Still from video from a failed capture attempt of SCP-746.

SCP-746 is to be kept in a standard humanoid containment unit at Bio-Site 66. Cells have been painted to Subject’s requested specifications, and Subject has been provided with several ornamental pieces. A specialized bedding area designed for SCP-746's body structure has been provided for comfort. Several musical instruments and associated repair components have been provided as requested entertainment; it is not expected that SCP-746 should ask for anything further.

SCP-746 is capable of communication in a dialect of Japanese, but shows interest in learning how to speak English. Foundation translators should be made available to facilitate communication. English classes are scheduled on Mondays, Wednesdays, and Fridays for SCP-746 to attend. As of 10/12/1990, SCP-746 has reached an acceptable level of mastery in regards to the English language.

Entity subsists on a diet of seafood and greens. Full dietary outline in attached Document 26-A.

Subject is allowed outdoor recesses for 7 cumulative hours a week, supervised by two Level-3 personnel. A wooded area █ km from Sector-19, henceforth Area-746-R, is available. Transport time is not to count towards the recess.

SCP-746 is scheduled for physiotherapy on Mondays, Wednesdays, Fridays, and Saturdays, as well as monthly examinations.

Note: After SCP-746's attack on Research Assistant Renfield on 04/03/19██, SCP-746 is to be kept confined in its unit. Outdoor recess and physiotherapy have been halted due to the sudden aggression displayed by SCP-746. Subject displays expressions of pain when moved; this is normal. Pain medication is to be avoided, due to our limited understanding of SCP-746’s physiology. SCP-746 prefers to walk with a cane, but an appropriately-sized wheelchair has been provided to its quarters for mobility.

SCP-746 is a humanoid being with obvious avian features, standing 1.3 meters tall and weighing roughly 38 kilograms. Subject’s face appears aged, and is coloured a deep red with a nose 28 centimetres in length. Most of the subject’s body is covered in rough down, with longer feathers on the forearms, shoulders, neck, and head, which act to help direct it while maneuvering through an arboreal setting. Subject has claimed to be 700 years old.

Subject was capable of surprising agility for its apparent age and size. While capable of sprinting up to 55 kilometres per hour (35 mph) in short bursts, subject also showed great acrobatic prowess within an arboreal setting. Subject has shown to be skilled in several martial arts during capture attempts, but currently denies any related knowledge. Personnel are to be aware of this fact; while SCP-746 has displayed little combat prowess while captive, Dr. Bridge has deemed it unwise to intentionally aggravate a Euclid-class object. See Description.

Addendum-746-01: Capture Subject was captured in 19██ in the city of Hachioji in the Tokyo metropolis of Japan. Subject proved difficult to engage, due to its aforementioned agility and a familiarity with the area. After several decades of evasion of Foundation operatives and the deaths of 4 Agents, an operative severely wounded SCP-746 during an encounter within a local shrine. Subject was captured and moved to Sector-19.

Addendum-746-02: Further Incidents Since the capture of SCP-746, several Agents in Japan have reported civilian sightings and encounters with similar entities. Most encounters have not been overtly hostile; however, most have taken place in broad daylight. While encounters are treated as urban legends by the local media, they are to be treated as a full containment breach. Further review is required by Level 5 before Foundation action is taken. Mobile Task Force Alpha-16, "Uncle Mike's", has been formed to hunt, and suppress public awareness of, entities similar to SCP-746.