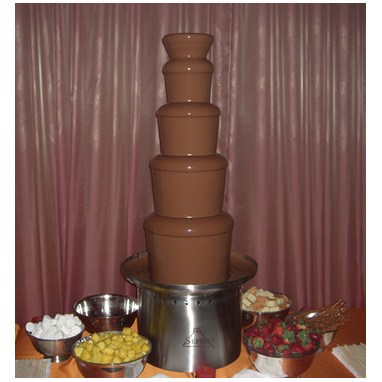 SCP-743, while flowing, set up for termination of [DATA EXPUNGED]

SCP-743 is to be kept in a Level-4 carbide-steel secure container, 1.5 m x 75 cm x 75 cm, no less than 5 cm thick. This container will itself be kept in a Level-4 secure room, 10 m x 10 m, with enhanced hard-metal lining. A full array of redundant sensors within the container will remain trained on SCP-743; another array of sensors will watch the container for any signs of breach. Video, audio, and data feeds from all arrays will pass to a control room manned at all times by at least two personnel. Any abnormal or aggressive activity by SCP-743 must immediately be reported to Level 4 staff.

SCP-743 is a stainless-steel chocolate fountain, 112 cm (44 in) tall and 47 cm (18.5 in) wide, with a mass of 35 kg (77 lb). On the base of SCP-743 is a laser-etched logo for Sephra, a company that specializes in producing chocolate fountains. SCP-743 usually appears to be in pristine condition: immaculately clean, well-polished, and completely undamaged. SCP-743 can be disassembled into its component parts (base, auger, cylinder, tiers, and crown), but standard examination of the individual components do not reveal any unusual traits.

Although the arthropoids that emerge from SCP-743 are significantly stronger than their normal counterparts, they are not significantly tougher. Stomping an individual arthropoid with a heavy boot will usually be sufficient to “kill” it, at which time it will fall apart into a drop or puddle of SCP-743’s liquid and quickly evaporate, its enticing aroma lingering. However, arthropoids from SCP-743 are almost never encountered alone.

It is not yet known how the arthropoids communicate with each other, or even if they are individual consciousnesses or part of a collective mind. It is also not yet known who or what controls the arthropoids (if anything), where the organic matter taken into SCP-743’s base goes, how SCP-743 can produce a seemingly endless supply of liquid and arthropoids, or where all that liquid comes from.

SCP-743 does not appear to be invulnerable. However, SCP-743 is both highly resistant to damage and will employ its arthropoid army as an active defense system. It is theorized that SCP-743 can be destroyed using [DATA EXPUNGED]. However, due to the apparent extradimensional characteristics of SCP-743, coupled with its inherent resistance to damage, no termination testing can be performed on SCP-743 without O5 authorization.

Note: “Due to the nature of SCP-743, it is difficult to study the source of its abilities. No one can get close to it without risking being eaten, our instruments don’t last longer than a few minutes before being shredded by 743’s bugs, probes sent into 743 can’t see anything but brown, and the liquid evaporates so quickly most of what we know of it comes from analysis of its gaseous phase. What we do know is that 743 is dangerous. We have yet to see any limit to the amount of stuff 743 can pour out. I firmly believe 743 could breach containment if it seriously tried. That said, 743 seems to behave itself as long as it gets a steady stream of live people to eat. Thus, I propose that some D-class personnel that will be terminated anyway be fed to 743. Kill two birds with one stone.” –Dr. Lambert