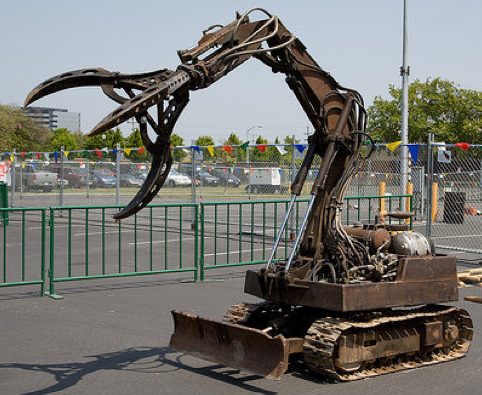 SCP-720 in an inert state, with several tanks removed for study.

SCP-720 is to be kept in a standard Safe chamber, located within Site 77's Safe SCP wing. SCP-720 is to have its three fuel tanks removed when not in testing, and is to be checked every three weeks for signs of wear; should SCP-720 require any maintenance work, all eight reservoirs are to be removed before maintenance is performed.

SCP-720 is a mechanical device superficially resembling a mobile, claw-mounted crane, fit with a plow mounted on the front, as well as a nozzle in the center of the claw. The nozzle is hooked up to one five-liter tank of industrial-grade adhesive and four five-liter tanks of red, blue, green, and yellow paint. When inert, it weighs approximately one metric tonne. SCP-720 is capable of moving at a speed of up to three kilometers per hour, and appears to be powered by small diesel engine, fueled by three twenty-liter fuel tanks.

When introduced to fuel, and if enough workable material is nearby, SCP-720 will activate, and remain active until it exhausts its fuel, its workable material, or both. When active, SCP-720 will use all available tools to form spheres out of material in its environment, rolling and forming objects using both its plow and crane arm, and using its adhesive to bond material together. Once a varying amount of different sized spheres have been made, SCP-720 will arrange them in a straight line, eventually making what appears to be a model of a planetary system. Upon completion of the system, SCP-720 will proceed to paint each planetary object, beginning with a single-shade base overcoat and continuing through multiple layers, showing detailed surface and atmospheric features. In the event that other colors are needed, SCP-720 will combine paints in order to achieve the necessary color. Other objects, such as planetary satellites and asteroid belts, are typically left unpainted and unaligned with the rest of the model.

The majority of the planetary system models created by SCP-720 do not match other systems currently known to exist. However, at least four systems match up: Sol, Kepler-11, Gliese 876, and Mu Arae. Several of the models seem to attempt to model other known systems, but include disparities such as an incorrect number of planets, the presence of circumstellar disks, or asteroid belts. These models are to be photographed and kept on record, in the event that further information discovered on known systems reveal them to be similar.

Addendum 720-A: On 06/09/2009, SCP-720 created a model with several anomalies inconsistent with other models it has created. A ninety-centimeter ring was placed around the model's sun, with two eleven-centimeter thick blue lines painted along both edges of the ring. A planet estimated to be in the circumstellar habitable zone and possessing apparent oceans also had a long, unpainted pole running from an assumed landmass to one of the planet's satellites. Additionally, twenty-seven small, cubical objects were placed in orbit of three of the planets, similar to planetary satellites in other models. Further research into the content of this model is underway.