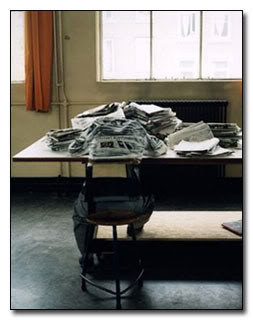 SCP-710 is to be cordoned off by a perimeter fence with constant patrols and all roads leading in to the site must be guarded with armed checkpoints. All airspace above SCP-710 is considered a no-fly zone, which must be constantly monitored and enforced. Any violations of these security measures by unauthorized intruders can be resolved with the use of lethal force if necessary.

It is forbidden for any Foundation personnel to enter SCP-710 without Level 4 clearance. Only D-class personnel and unmanned reconnaissance vehicles may enter SCP-710 for research purposes. Should containment of SCP-710 fail, immediate airstrike of SCP-710 and the surrounding area in a five mile radius is authorized.

SCP-710 is an abandoned suburban housing development located in ██████████████. However, any and all organic life that enters SCP-710 will eventually disappear without a trace. Exactly how or why this phenomenon occurs is currently unknown, but video recordings of test subjects have revealed several distinct stages.

Initial Stage (Exposure time: none): Subjects show no outward sign of anything wrong. However, there is noticeable anxiety and stress related to a sudden shift to a new environment, as well as the naturally foreboding atmosphere SCP-710 produces due to its abandoned state. Subjects still respond to external stimuli normally.

Middle Stage (Exposure time: 7-8 days): Subjects begin to establish a daily routine through a combination of self-interest, boredom, and orders from Foundation staff. At this point, early symptoms of exposure to SCP-710 appear. Subjects become much more lethargic than normal and exhibit many signs of both physical and mental fatigue. However, these symptoms are light, and are easily countered through specialized medication. Subjects show a decreased response to external stimuli.

Late Stage (Exposure time: 10-12 days): The symptoms shown in the Middle Stage of exposure begin to worsen. Also, the subjects begin to slowly become transparent. However, none of the subjects appear to notice these phenomena. Instead, the subjects will continue with the daily routine they had set during the Middle Stage, with slight variations. Late Stage subjects show almost zero response to external stimuli and appear to be completely unaware of their condition.

Terminal Stage (Exposure time: 14 days): Subjects become completely transparent, with a faint silhouette being the only visual marker of their presence. The symptoms of fatigue increase significantly as shown from the movements of Terminal subjects as well as their unwillingness or inability to respond to external stimuli. Subjects will no longer follow through with their daily routine and will instead wander SCP-710 aimlessly, still unaware or uncaring of their current condition.

Expiration: (Exposure time: 15 Days): Subjects will essentially fade from existence. No physical evidence of their presence remains, and attempts to track their movements and whereabouts after Expiration have so far proven unsuccessful.

So far, there seems to be no way to counteract the effects of SCP-710. Tests with D-Class personnel show that once Middle Stage symptoms manifest, the process is impossible to prevent or reverse. This leaves a small window of only several days for personnel to enter SCP-710 without risk.

The exact cause of this phenomena is currently unknown. All that is known is that SCP-710's ability manifested sometime in 19██, causing the disappearance of approximately ███████ people. The event was covered up as a natural disaster.

Notes: It's no coincidence that SCP-710 manifested so suddenly and randomly. Perhaps it had something to do with the [DATA EXPUNGED] Event? The dates certainly correlate. -Dr. ████

Perhaps, or it's something we haven't thought of yet. -Dr. ████████

We need to get a team in there, and not just a bunch of random D-Class. They're too unreliable. There must be something hidden in that town. -O5-██

After Action Debriefing
Dr. ████: Did you find anything of importance?

Researcher ██: No, but there's only so much ground you can cover in forty eight hours, especially when you have to spend a good chunk of that time just setting up and then bugging out when the timer is almost up. ████████ is a big place, and we need more than half a day to explore any decent portion of it.

Dr. ████: (sighs) Okay, then let's diverge a little. What were your initial impressions of SCP-710?

Researcher ██: There's something monumentally spooky about the place. Probably the fact that it's so hard to imagine such a big town with so many people could just appear abandoned like that. We also ran into Batch 35, who were all in Terminal Stage by that point, which scared the shit out of us when we first ran into them. Plus, it was just so… quiet. I never thought I would actually miss the sound of birds singing.

Dr. ████: Is there anything else that you would like to add?

Researcher ██: That I never want to go back there again. When the birds don't cry, you can hear things that are better left ignored.

Researcher ██ and his team are currently suspended from active duty pending the results of a full psychological screening.